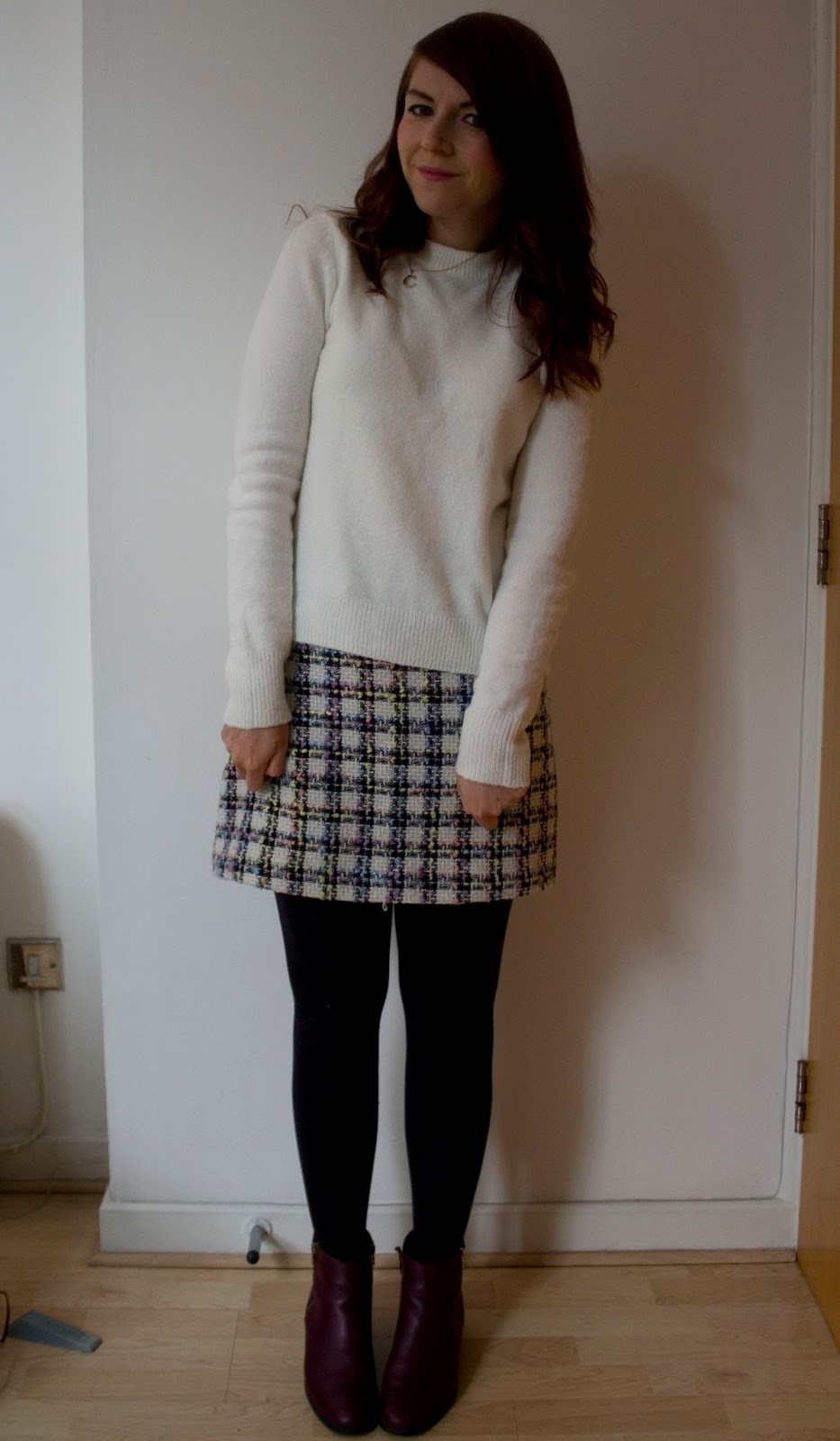 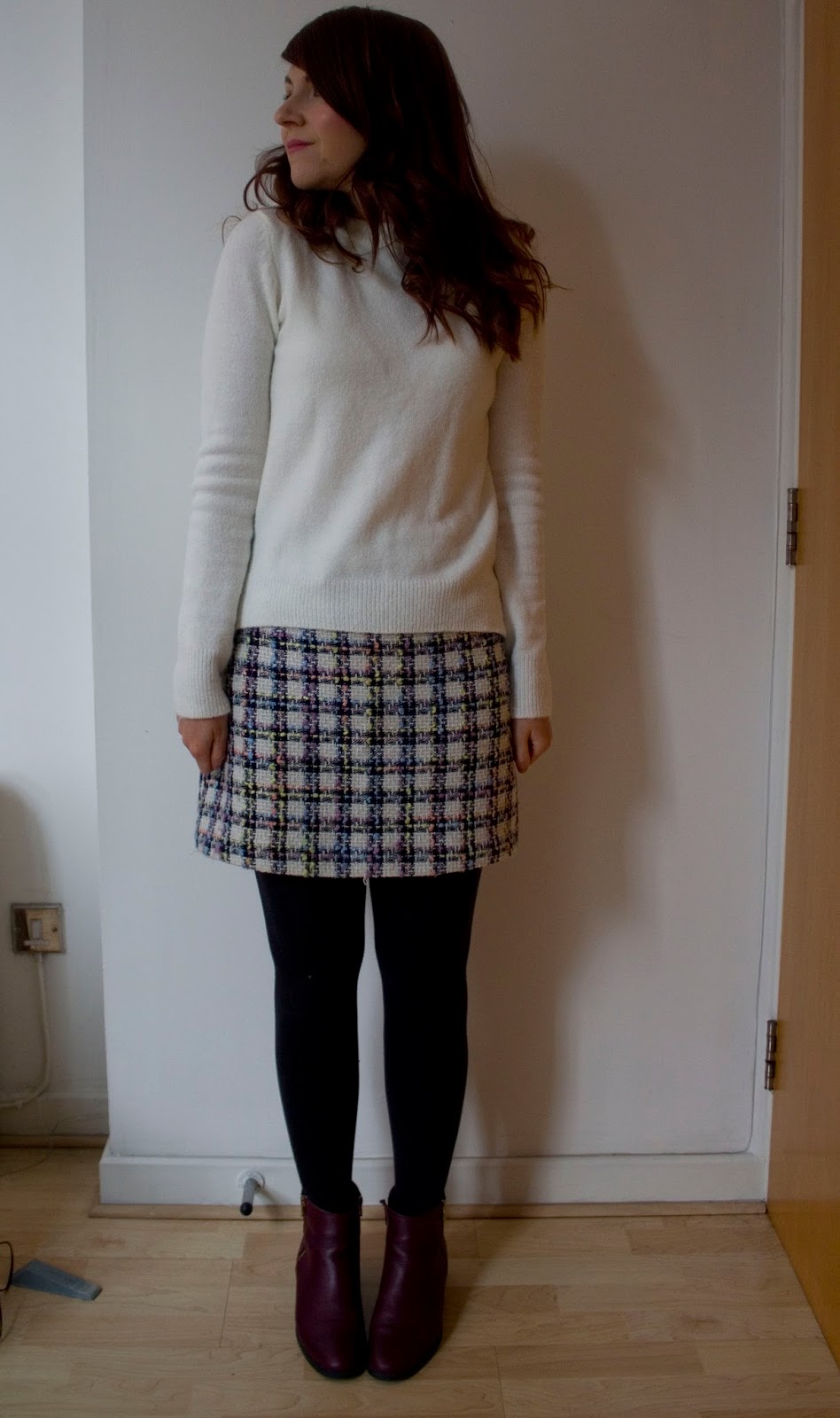 This is actually the outfit I wore today. When was the last time that happened? In fact, it's the outfit I'm still wearing now. Minus the white jumper. Come on, do you really think I'm the kind of person who can be trusted to wear a white jumper? On Wednesday, Phil and I did the food shopping after work and then I made dinner, which ended up taking an hour. Everything was just ready in time for Bake Off so I decided we could be naughty and eat on our laps. I picked up one of our biscuit-shaped cushions, put it on my lap to protect me from the hot bowl, and as I reached for the mango chutney I said to Phil "don't let me drop any of this on the cushion." Seriously, it took less than 10 seconds before I was cleaning chutney of a custard cream cushion over the sink. So that's why I really shouldn't have bought a white jumper. 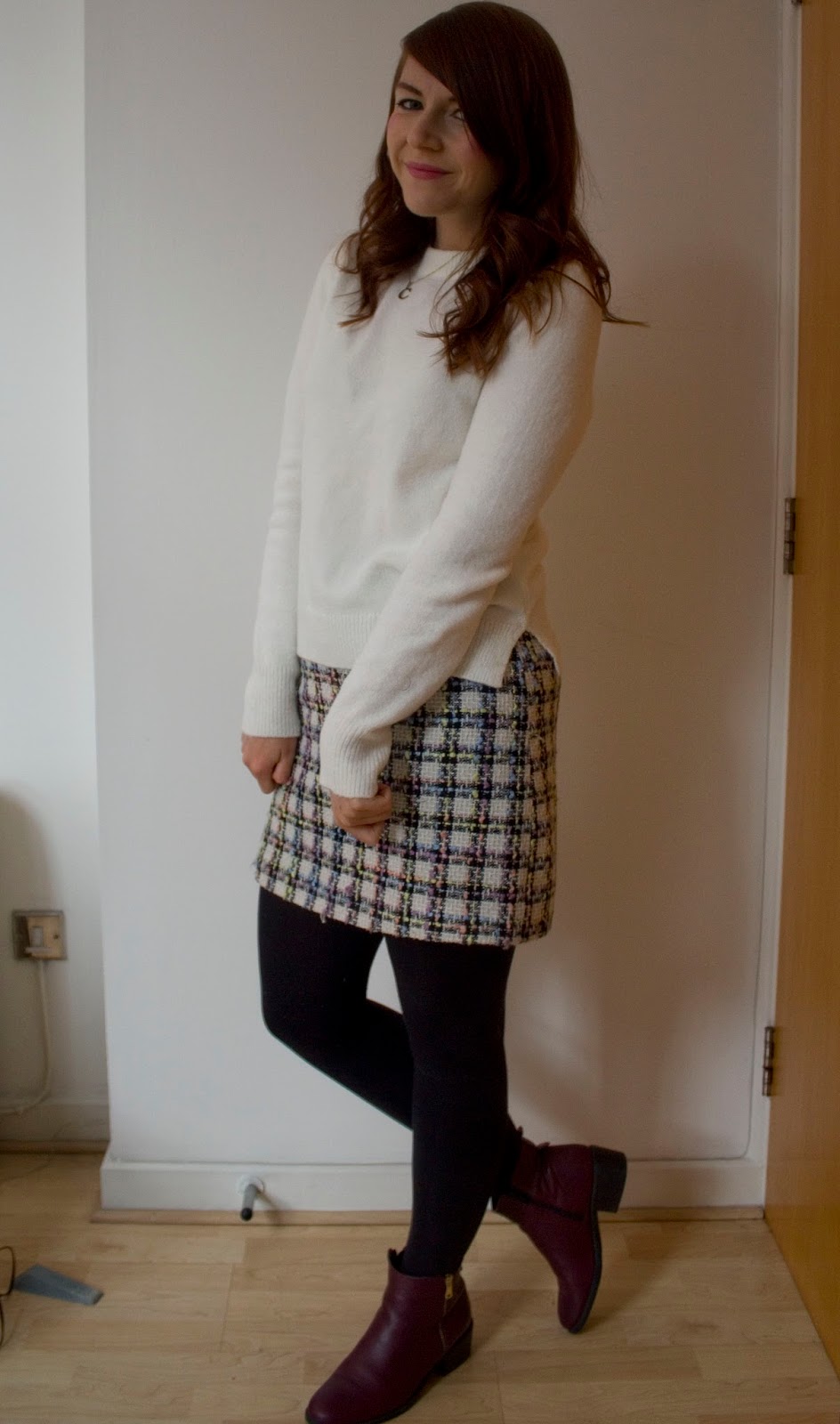 My one regret with these photos was that I took them before I put a gorgeous dark berry autumn lip on. Now I'm back from holiday I'm in full-on autumn mode. Right now I'm wrapped up in a hoodie with the heating on and candles lit and it's lovely. I hate to be a typical blogger in my love of autumn but it is my favourite time of year. I left work the other day and the air just smelled like autumn. Is that a thing? It was gorgeous.
Things have been a bit manic since I got back from holiday. I had a week away with my parents, landed Thursday night and then got up at 4am for a flight back to Spain for my friend's hen do. Which as you can imagine was a pretty exhausting one! Then this week I've had to fit in choir, the aforementioned food shop, and absolutely bloody awful 8 mile run on Tuesday after work (people always ask me how I run in the morning before work but SERIOUSLY HOW DO PEOPLE DO IT AFTER WORK? It was so awful and dark and busy that I almost cried with frustration two miles in). Phil and I also panicked when we got back about the number of films on at the cinema we needed to see (we both have Cineworld cards so we go a lot - I'm planning a post on the pros and cons of having a Cineworld card soon!) so Thursday we went to the cinema, and then yesterday Phil went away for the weekend (sadface) and I went to see Fall out Boy.
Which leads me to another thing I want to talk about. One of my favourite-ever quotes is "Nothing of me is original, I am a combined effort of everyone I have ever known", and last night, watching Fall Out Boy, I thought about how much the music I listened to as a teenager has affected who I've become as an adult. If you didn't know, I was very, very, very into my music as a teenager. I lived it, I breathed it. I only wore band tshirts, or clothes designed by people from bands, or clothes recommended by people in bands, or the type of clothes people who listened to my kind of music wore. I spent all my time online on forums for the bands I loved or reading up on my favourite bands. It was everything I was about. I started reading Chuck Palahniuk after hearing that his books were referenced in Panic! at the disco songs. Which led me to discover an entire genre of nihilistic, transgressive literature that I adore to this day. Which led me to films, to genres of films, to more books, to this entire identity that all became with music. If I hadn't read Chuck Palahniuk at 16, would I have read Bret Easton Ellis at 18? Would I still have written my dissertation on American Psycho? Would my favourite film still be Fight Club? Would my favourite book still be Invisible Monsters? Anyway, it's just interesting to think how these little things have transformed you. From the outside, despite my half dozen pairs of converse and love of black eyeliner, you probably wouldn't know the kind of person I was as a teenager, who wore red eyeliner and waited outside HMV before it opened to be first person to get a My Chemical Romance album. But when you look into the things I love today, I'm still that same 16 year old.
Anyway, I digress. Fall Out Boy were a lot of fun. I always joke, and feel a bit ashamed, that I have the same taste in music I've had since I was 15, and I've always pretended to like Fall Out Boy in a bit of an ironic way, but the reality is I had a really good time, it was great fun and they were great. So here's to not denying my 16 year old self. But not bringing red eyeshadow. 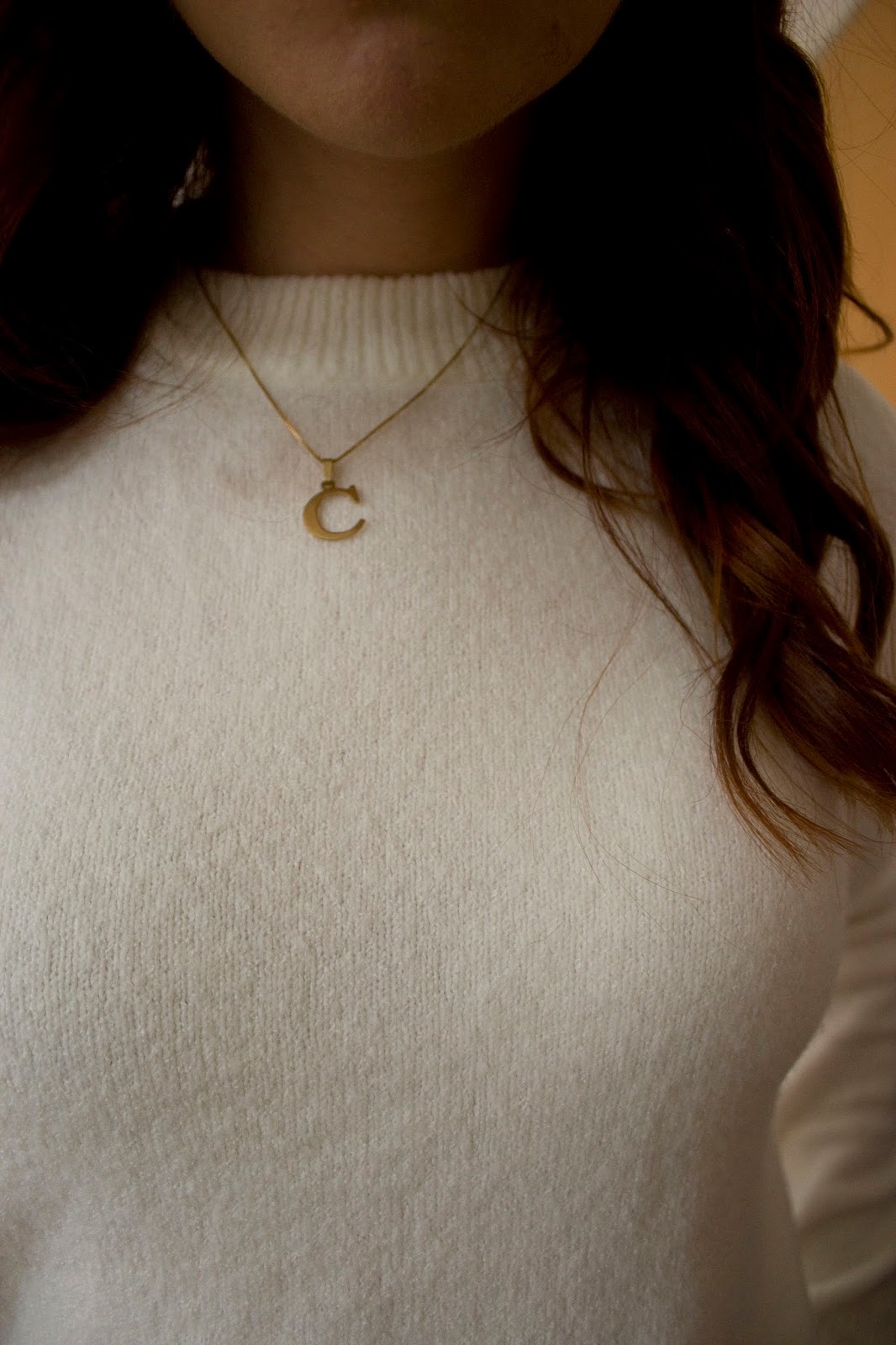 ANYWAY let's talk about this outfit, and this necklace. I started writing a blog post yesterday entitled "Why I'm a terrible fashion blogger" (I'll definitely still publish it soon!) and one of the reasons was that now the cold weather has hit I just want to wear jumpers and jeans for the next 6 months. But I really don't want to just post an outfit of a jumper and jeans on here because, come on, you're smart people, you know how to pair a jumper and jeans. So this morning I got a bit more dressed up than usual.
There's a bit of a funny story behind this jumper. I took myself on a little shopping date last month. I went after work, took as long as I liked and I had autumn winter on my mind and money burning a hole in my pocket. And could I find anything I liked? Urgh. I nearly resorted to buying a new bra just to buy something. But then I went to Oasis and lately I have just loved Oasis. It's actually my favourite shop. I knew I'd find something in Oasis. And I did. A camel-coloured crew neck jumper, and the same one in grey. I loved the camel, but not the grey. So I went to take the grey back and spotted it in white. Okay, I thought. I have a voucher. I can have them both. I got to the counter and the girl said "oh these are such lovely jumpers. I tried the burgundy one on the other day. "
WHAT. I said. THERE'S A BURGUNDY ONE? WHERE IS IT GET IT ME NOW.
I think I actually scared her a little bit.
And that's the story of how I ended up with three of the exact same jumpers. No regrets.
So basically I'm living in these jumpers at the moment (and also these boots, which are, unsurprisingly, Oasis. They were a bit of a splurge at £68 but I won an award at work and won a £50 voucher for I asked for an Oasis voucher and voila, £18 boots), and this necklace. How cute is this necklace? I don't wear a lot of jewellery, as in, I wear the same three necklaces on rotation all the time, but I don't really have anything small and delicate. This is from Onecklace and what I loved most about their service was after choosing my necklace they contacted me with a couple of design options so I could check the style I wanted before ordering. As most of the letters are a curly style the C can look a bit hard to read so they gave me the option of a curly C or a classic C which I thought was a really nice touch. Obviously, I went for the classic C. I could also choose different chain lengths which I thought was cool. It came with a little certificate of authenticity too. 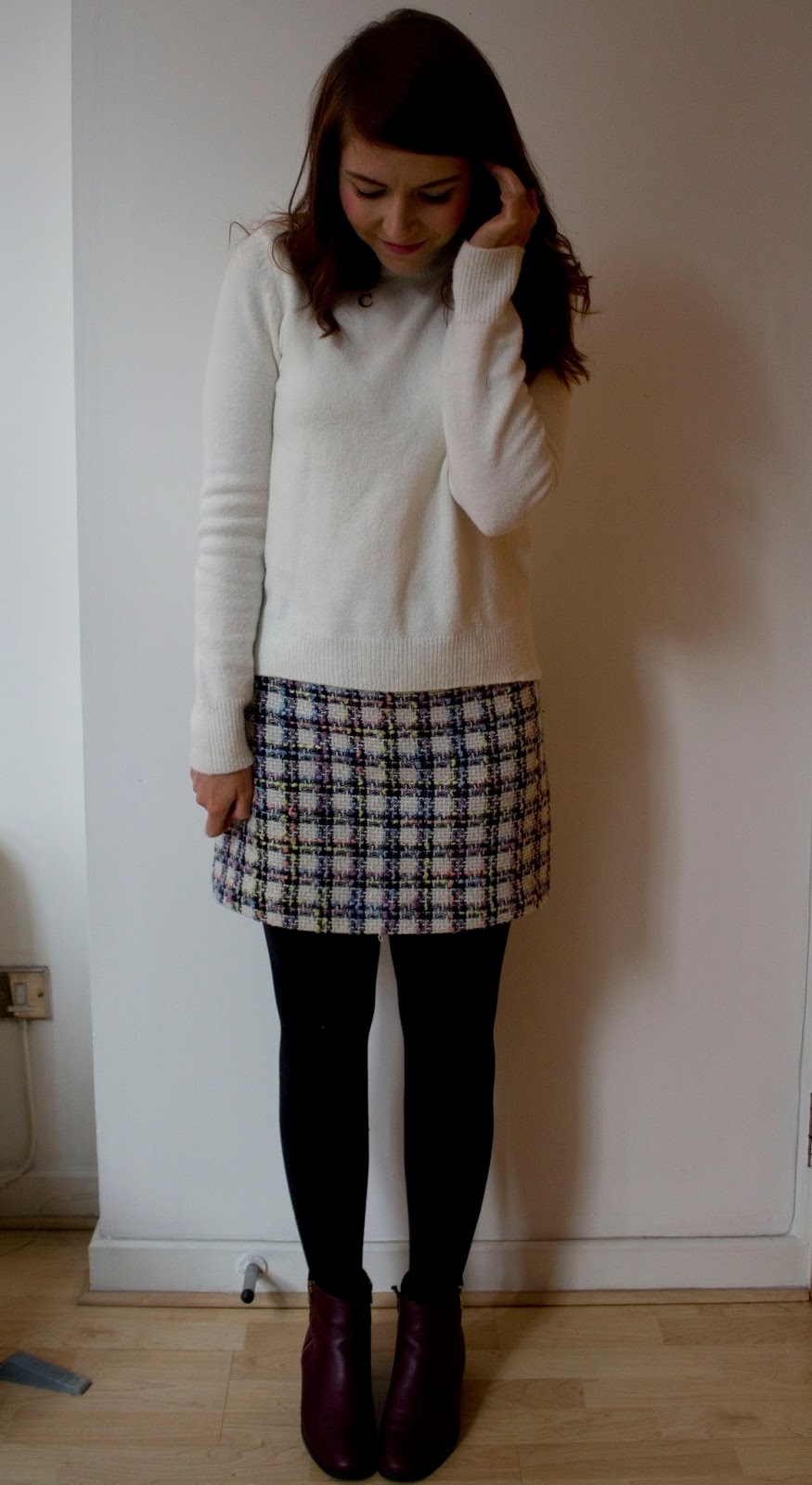 jumper - Oasis
skirt - Warehouse
boots - Oasis
necklace - c/o Onecklace
God, can you tell Phil is away? It's like word vomit over here. It's actually been really nice today. I went to parkrun this morning, then did all my weekend food prep (I made seitan for a stew I'm doing tomorrow, made soup for the week and prepared dinner for tonight). Then my parents came into town and met me! We went for a drink and then they came round for tea! I made Anna Jones' tomato and coconut cassoulet for my mum and I and... well a frozen pizza for my Dad. He's not a vegetarian food kind of guy! It was so so nice to have them over though. I'm so glad I didn't move too far away!
I'm going to have an early night tonight because tomorrow is my last long run before the Great Birmingham Run next Sunday! I'm equal parts nervous and excited. I really want to just enjoy the race and not worry about my time but I've got that time goal in my head and it's hard to ignore...
Anyway, I really need to stop talking. Have a lovely weekend!