For all my recipe-book-buying, I have to admit that I'm not that creative in the kitchen.
I guess these two go hand in hand - I'm not very good at creating something from scratch and I need someone to tell me what to do.

I nearly always follow recipes, and while I do make the occasional substitution (am I hell paying for pine nuts - sunflower seeds will be fine), I tend to play it quite safe.

I was supposed to be on a recipe-book-buying-ban (aren't I always trying, unsuccessfully, to be on one of those?!), when I came across this book via my friend Sarah, who had won it at work. I was intrigued by the easy concept and the hands-off nature, especially after a long day at work. However, I wasn't sure how meat-centric the recipes might be with it being a book dedicated entirely to roasting.

Sarah assured me there were plenty of veggie recipes, and then the author joined in the conversation too, and said there were lots of veggie and fish recipes, plus the infographics at the start of each chapter made everything easy to adapt.

I was intrigued! And after a quick flick through in Oliver Bonas waiting for a train, I of course, bought it. 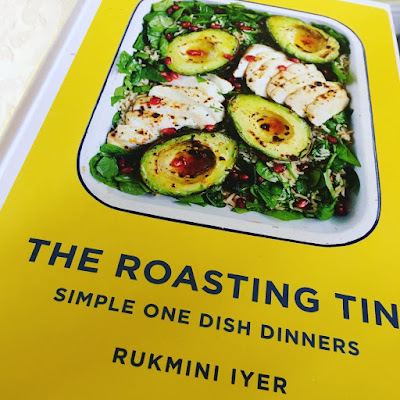 First impressions was that there were indeed plenty of veggie recipes and plenty that I was excited about. There were even a few meat recipes I wondered how I could adapt! I did especially love the infographics at the start of each chapter which gave you a bit of a formula and timings to adapt the recipes for whatever you fancied (or had in your fridge).

I was intrigued by the "one-pan-meal" element of it, as I'm usually quite wary of that, and as a volume-eater, I always wonder what side dishes I might need or if I'll be hungry after. Some dishes seemed to be veggie-only and didn't have recommendations for what to serve them with, and I couldn't be sure if this was because they could stand alone, or if you were supposed to supplement them with a side dish or some carbs. 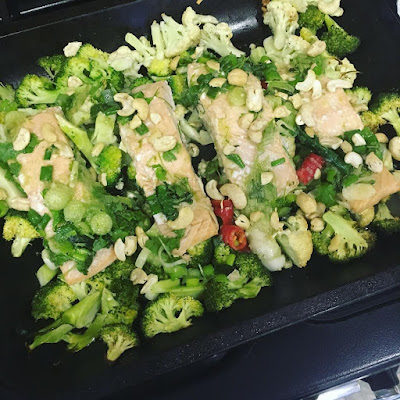 At my parents', we usually have at least two meals across the four of us. You'd think I was the awkward one as a veggie, but it's actually my Dad who proves to be the most awkward, as both my Mum and Phil will eat whatever I cook.

So making this for all four of us was a risk.

However, we had four completely clean plates! This was super quick, easy and delicious - definitely one I'll be making again! The only annoying thing is I can't remember what I served it with, but I think it was cauliflower rice or mash (must make better notes going forward!).
(Fancy giving it a go? You can find the recipe here) 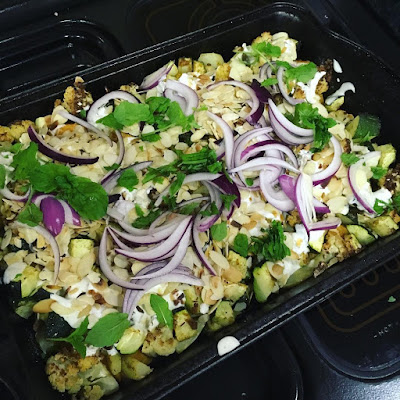 So as you might see from the photos, no okra here. Not something I can get easily in Aldi! So with my new-found veg-swapping confidence, I used courgettes instead.
God this was so unbelievably delicious. So so so so so good. I could eat it again right now. The flavours were so tasty and it was so easy to make, plus I think you could easily swap in any other vegetables you fancy.
It took about an hour in total, but it's very hands off, so it's nice time to curl up with a book rather than having to jump up and stir something every 5 minutes!
Worth adding - I nearly didn't bother with the almonds but I'm so glad I did. 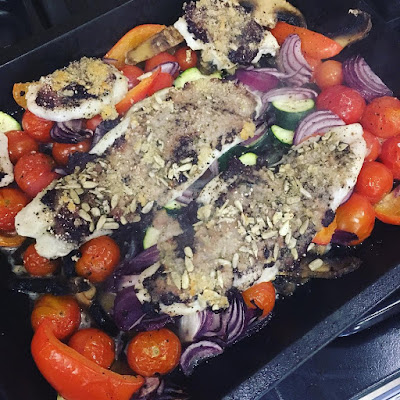 Okay in this case I think I made too many substitutions. I used sunflower seeds (as mentioned earlier) rather than pine nuts and they didn't really crisp, plus I think using frozen and then defrosted fish made this a bit watery, so it didn't really taste of anything. However I enjoyed using a mix of veg not just tomatoes - I used courgettes, tomatoes and peppers. Next time, more olive tapenade! 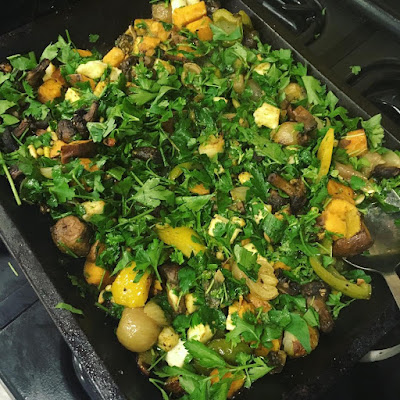 Ooh this one is super yum. I've actually made it twice now. It takes a little longer than some of the other recipes - about an hour and 20 - so it's a little bit long for us midweek. I love swapping some of the mushrooms out for sweet potatoes which make it more of a complete meal. The second time I made this we had it with houmous and pitta and it was amazing. This is definitely one of my favourites from the book. 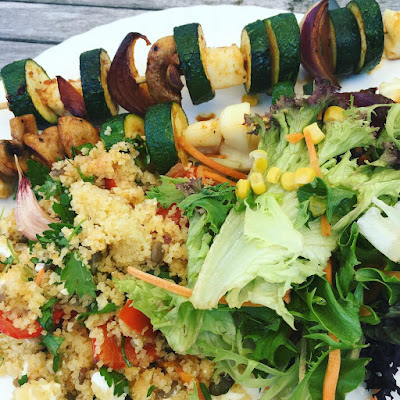 This is one of the quicker recipes, and we had this as a side dish at a bit of a mini BBQ we had a few weeks ago (okay, we just got the George Foreman out, but it was close enough!). I had this alongside veggie and halloumi kebabs and salad and it was the perfect side dish. I might reduce the bulgur wheat next time if I was going to have this alone, or serve it again as a side dish. I also like this recipe because it's very easy and full of things I usually have in my storecupboard! 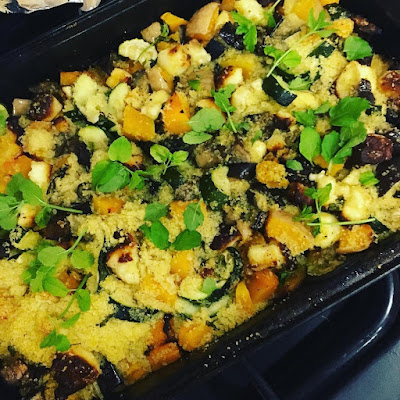 This was one of the only recipes I probably wouldn't make again. It was nice and had some of my favourite things in it - halloumi, aubergine, butternut squash - but I found it a little bit dry. This might be another that is better as a side as it's quite heavy on the bulgur. 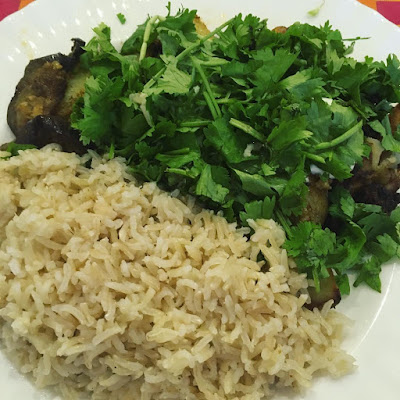 I managed to get Phil to eat aubergine, which is always an achievement. I absolutely loved this, especially with the coconut rice which I almost didn't bother with. What I love about this book is it's so adaptable - I added mushrooms and next time I'm going to swap the aubergines for courgettes to appease Phil's aubergine dislike. I'm actually planning to make this again this week!

Honey-roasted carrots and parsnips with quinoa and rocket 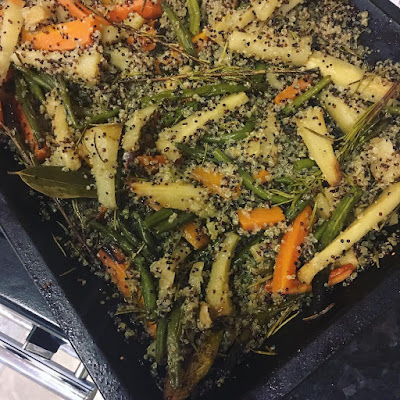 I still can't decide how I felt about this one. It tasted a bit like Christmas, thanks to the rosemary and some leftover sage I threw in. I found the honey made it a bit too sweet. I'm still a bit unconvinced by cooking quinoa in the oven and some bits still felt a bit gritty, and I added extra water because I felt unsure it was going to work! This was another that I think might work as a lovely, wintery side dish, but on its own was a little bit dry and repetitive. Maybe some chickpeas or lentils would help bulk it out, or oooh, veggie sausages! Maybe I'll try that next time.

Sage-roasted butternut squash and mushrooms with feta and tomatoes 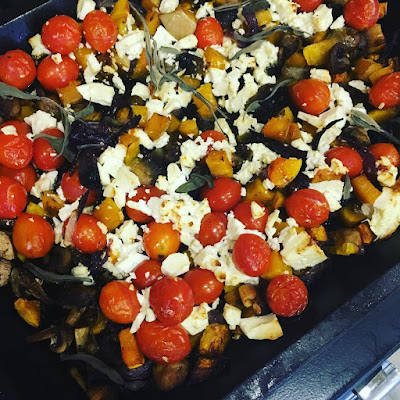 Annoyingly, I forgot to make notes on this recipe! BUT I remember it being really, really good and I loved the mustard-y rocket on the side (however, it didn't keep well with the dressing on, surprisingly). I loved the melty hot feta. Ooh yum, definitely making this again.

This is one of the best books I've bought in ages. I absolutely love it. It's perfect for when I'm super busy, because I can just throw everything in the oven and forget about it.

My next step is going to be looking through the meat recipes and seeing how I can adapt them to be veggie-friendly, as this book has given me loads of inspiration to experiment and not just follow the steps.

I bought this book for my Mum for her Birthday and I can't stop recommending it to people. I know loads of people who have bought it after I've raved about it so much!

It's perfect for busy people, quick and straightforward, and I love that I can get on with other things when I don't have time to stand over the hob. It makes excellent lunchbox leftovers too!

I can't recommend this book enough!