Why I love British Military Fitness 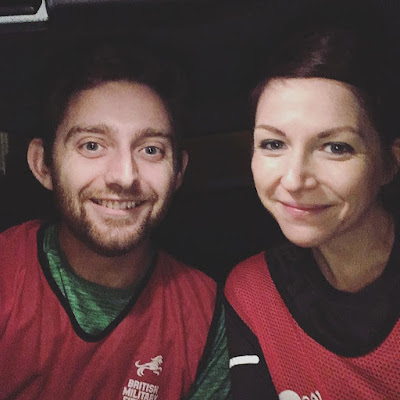 Phil and I on our four year anniversary which fell on a Wednesday so we obviously spent it at BMF...

My requirements for all forms of exercise has always been threefold:
1. I have to be able to do it alone
2. I don't need to go anywhere to do it
3. I can do it in the morning.

This is how I fell in love with workout DVDs, running and at-home yoga - I can do these on my own, anytime, and in the comfort of my own house (or at least, outside of it).

So how did I end up falling in love with a group fitness class that we have to drive to, that takes places at a scheduled time in the evening?


What is British Military fitness?

If you haven't heard of British Military Fitness it's basically a kind-of bootcamp class, run by ex-military. It's a mix of cardio and strength in a high intensity interval style (exercises interspersed with sprints) and lasts an hour.

Every single class is different.

There's a bit of a misconception that you're going to be crawling through mud and yelled at by instructors, but it's not like that at all. Okay they're not afraid of making you do burpees in the mud and you'll never see a class cancelled because of rain or snow, and you are there to push yourself, but you are never going to be pushed beyond what you're capable of.

It's challenging, you have to push yourself, sometimes more than you think you're capable of, but more than anything else, it's FUN.

It all started last summer when I was on my "off-season" from running (I tend to run two big races a year - Spring and Autumn, and I start training about 4 months before, so I have a small gap between May and July, and another between November and February) and I usually find myself simultaneously bored and restless during this break and also so bloody sick of running. I'm a person who craves routine and being told what to do, so while I'm always exhausted and relieved to be done with training, I can find it hard to stick to a new temporary routine.

Phil had done British Military Fitness classes years ago and had always fancied the idea of going back, but I'd always bemoaned that it would interfere with my training, but during this summer break he floated the idea again - "we could go to a free class on Sunday and see what you think?"

We were living at my parents' at the time, so we were a bit restless and in-flux generally, so this seemed a perfect opportunity. Plus your first class is free anyway, and we managed to find a deal where we got the first month free too, so we thought, why not?

We are quite lucky near us that there are four parks nearby that do classes, and they do them on alternating days, so you could pretty much go every day if you wanted to (not that you'd ever want to!). Our local park has classes on Sunday mornings, Monday nights, Wednesday nights and Friday mornings, so we went along to a Sunday morning class.

On your first session you need to choose a bib colour which corresponds to your fitness group - green is the toughest, then red, then blue. Phil had always been a red before and we decided this was probably about the right level for us both. You are able to progress through the colours over time as your fitness improves.

My first class was bloody awful! My upper body strength is rubbish and I remember one part running with a tyre over my head, barely being able to keep it over my head and coming dead last.

But even from that first awful class, I was hooked!


What I love about British Military Fitness

What I both love, and hate, about BMF is that it pushes me. It challenges me. You can phone it in a bit when you're doing an at-home workout if you don't want to do that extra burpee, but when you've got 20 people watching you, you have to dig deeper. There are no excuses.

It also makes me feel that kind of sore of a really great workout. I'm a typical runner in that I usually just run, and it's good to feel soreness in the muscles I don't normally use! I absolutely hate tricep dips and I'm a bit rubbish at push ups, but whenever I'm doing them I remind myself the more I do them the easier it will get!

I love the variety - I'm not exaggerating when I say every single class is different. Some days you might use equipment like kettle balls or bags or ropes, some days it might be nearly all cardio, sometimes you might be doing pull-ups on a climbing frame. The instructors nearly always plan the session on the spot, so you never know what you could be doing next!

I personally love being told what to do, and I like that for an hour I can completely switch off from whatever happened in my day. I don't have time to worry about that work project or think about what I'm making for dinner next week - my focus is on burpees and runs and press ups and I think it does a lot of help for my always-fizzing brain!

I also love the flexibility. We're very lucky where we are that there are a few parks near us that offer sessions on alternative days - we usually do a Wednesday nigh and a Sunday morning, but we can do a Thursday night at a different park, or do our park's Monday session if we miss Sunday. I know this isn't the case for everyone, but for us it ensures we never miss a week if something unexpected comes us!

Phil and I have a nice little routine now too which makes it a lot easier. On a Wednesday we always have dinner from the slow cooker, or something out of the freezer, which means as soon as we get home I can quickly whack something in the microwave and toast some pittas and dinner is on the table in 5 minutes, which is entirely necessary at 8.30pm! I don't have the time, energy or inclination to cook when I get home from a tough session and it's really made me appreciate my slow cooker!

It's also really nice to do it with Phil. We're nearly always in the same group (we're both reds - the middle group - but my park quite often split the reds down the middle, half with the easier group and half with the harder group, and we're nearly always together in the harder group!) and sometimes we partner up, sometimes we don't, and it's nice to have that time together doing a hobby, and laughing on the way home about how hard it was and how sore we are the next day.

It's really social too. Phil and I aren't really in the "in-crowd" and don't want to be either, but we know people to chat to and I always try to learn my partner's name if I get partnered up because it's nice to remember people's names when you see the same faces every week! There's a really active Facebook group for our area too so you do get to know people which is really nice. There's nothing quite like bonding over being absolutely exhausted and then finding out you have to do another 10 burpees!

Finally, you get out of it what you put in. It can seem a lot for unlimited membership at £37 or once-a-week at £28, but the more you go (obviously not if you're on limited) the cheaper it is and the more you get out of it. I'm notoriously tight and I don't mind spending the money because it's cheaper than most gyms and you get the motivation and focus of having a personal trainer or doing classes.

I couldn't recommend it more - plus your first class is free and there are quite often deals on like get £50 each if you bring a friend or free month trials. It's painful, it hurts, and it pushes you, but it's such a laugh and you feel so good afterwards, and I never, ever thought I'd be one for group fitness classes!

I am always keen to talk about BMF, so if you have any questions, drop me a line on Twitter!