In order to do a cookbook review, I tend to cook from the same book for a couple of weeks. I like to cook about 10 recipes to write a review. However, of course, cooking a brand new recipe is a lot more tiring and demands a lot more concentration than cooking something I've made lots of times before, so I tend to cook two or three recipes from a book over a week.

So because we're going to be eating recipes from a new book a few times a week, I tend to avoid reviewing books based on specific cuisines. I do all the cooking and meal planning, and as much as I would happily eat curry every single day of the week, for example, Phil is less keen (although we do eat Indian food at least once a week!). That's why as much as I love Meera Sodha's Made in India and Fresh India, I haven't cooked from them enough over a consistent period of time to write a review.

But when her new book, East, came out, I really wanted to review it. I absolutely love her other books, and her vegan column for the Guardian, and I was hoping that there was enough variety in a book encompassing the whole of the "East" for us to not get bored of it.

I've cooked 8 recipes so far (I always wonder if I should update reviews of books when I keep cooking from them - even if it's just for myself! I like to remember what I thought of recipes and it's always disappointing when I check an old post and realise I've made loads of other recipes since I posted the review). There are loads of recipes I stil want to cook, but I'm ready to tell you what I think (and maybe add an update in a few months when I've tried a few more things!).

Obviously I was buzzing that this book is entirely vegetarian. I do own quite a lot of non-veggie books, but I obviously get much more out of vegetarian books because I can eat everything in them!

From a first impression, there was so much I wanted to make (I counted at least 30 things!) and a lot of them were do-able midweek.

There were quite a lot of unusual ingredients - I ended up getting some gochujang paste  as I noticed it was in a few recipes I wanted to make, and I've got a list of ingredients I need to pick up from the Asian supermarket, but there are a lot of recipes using things you can pick up in a big Sainsburys.

I like the mix of curries, noodle dishes, breakfast dishes, rice dishes and an ENTIRE chapter on tofu! 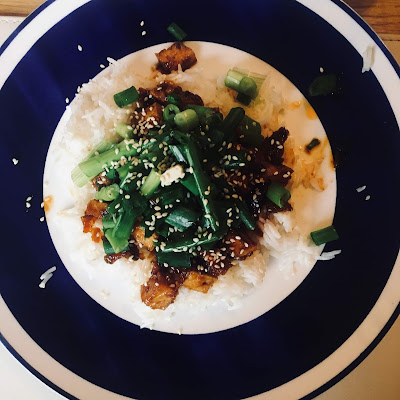 This was the first thing I made and the recipe I needed the gochujang paste for. Grated pear was an unusal addition (I still have one sitting in my fruit bowl!) but pretty much everything else was pretty storecupboard.

I made this on a Saturday night but it's pretty quick and easy and could easily be made midweek. It took me about an hour but only because I also made the gochujang carrot and cabbage (which was okay but not worth making again).

I noticed that Meera seems to buy 280g blocks of tofu, whereas I buy the 400g packs of Cauldron tofu (which fits perfectly in my tofu press!) so I halved the amount of tofu to only 200g as I didn't want 120g of tofu leftover!

This was absolutely and completely delicious (even though I accidentally cubed the tofu instead of cutting slabs) and the only complaint was Phil wanted there to be more of it!

Yes, I, Charlotte Cantillon, whose husband complains he never receives the same meal more than once, made this recipe TWICE in a WEEK!

The second time I doubled the sauce (definitely the right decision) but kept the tofu at 200g, adding some mushrooms to bulk it out.

Honestly, now I have the gochujang paste I can imagine making this all the time. Aside from the pears it's almost a storecupboard dinner (I always have tofu in the freezer), so I might find a way of making it without! 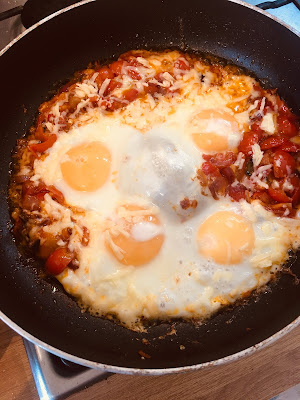 This had "weekend brunch" written all over it and it did not disappoint.

It's so easy, so quick, so made-of-things-I-always-have-in, and so so so much better than the sum of its parts!

This is destined to be a brunch favourite!

Edit: Ding ding ding! Made again klaxon! Made it again today. It was amazing again. 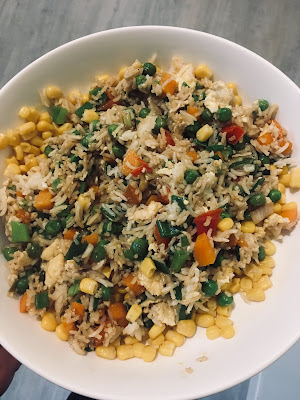 But Meera gives you a version with either cooked or leftover rice so you have the option regardless of your rice situation!

I didn't write this on my notes (argh!) but I think I halved this for two of us.

All I remember was it was utterly delicious and completely adaptable and has made me wonder why I waited so long to make fried rice! I also love that with the exception of spring onions, this is another recipe of ingredients I always have in (rice, eggs, peppers, carrots, peas, garlic, chillies and condiments) and I cannot wait to make this again. 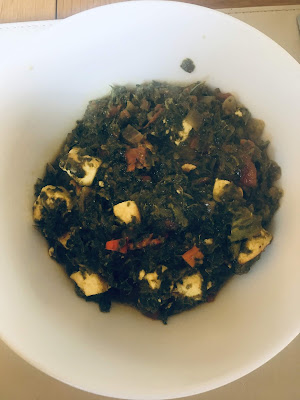 A word of warning - do not misread the instructions here and accidentally jab a wooden spoon into your moving food processor! Only an idiot would do that and get the shock of her life when the spoon hits the blade! I was completely fine - just felt a bit stupid!
Anyway, I love saag paneer and I loved kale so I was keen to make this!
Side note - this is a really good way of finding out your pans are not actually non-stick! I ended up having to switch pans when all the cripsy delicious paneer ended up stuck to my pan!

I thought this would be a quick dinner but it took about an hour, which was just enough to push me over the edge midweek. I ended up finishing it a bit tired and cranky after an hour of hands-on cooking.

I liked this but Phil really did not. The kale was a nice change but it was a bit too chewy and stuck in my teeth - I'll stick to spinach in future! 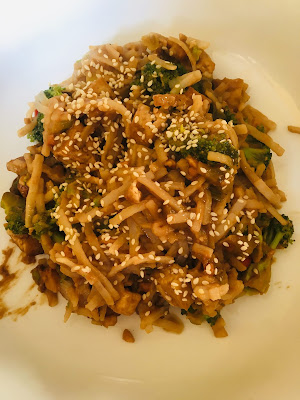 I'm going to be honest and say I don't really know what is in authentic pad thai, and I also know Meera isn't going for authenticity with this book, but this felt more like a delicious bowl of peanutty noodles more than a pad thai.

I decided not to halve the recipe at the last minute and I didn't quite have enough broccoli, so I used 400g tofu to even it out. I managed to get rice noodles which I've never used before!

I liked that this was all one pan which made it a lot easier for midweek clean up, and at 45 minutes hands-on it was just about do-able midweek.

I loved the brococli in this but Phil wasn't keen. We also both felt it was a bit heavy on the peanut butter. I would maybe adapt the sauce again for with veg. 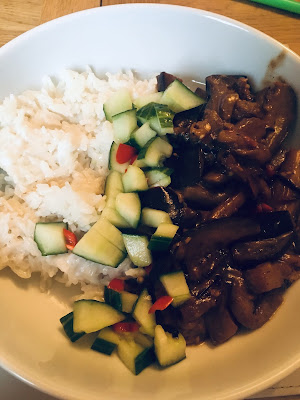 I saved this until Phil was out, as he doesn't like cucumber or aubergine.

I liked that you used the whole can of coconut milk with some in the sauce and the rest in the rice (I hate having half a can of things in the fridge!), but because I halved it, I still ended up with extra coconut milk! So I ended up doing half the aubergine (which was good as the full amount wouldn't have fit in my pan!) and all the rice, and putting exta coconut milk in the sauce! I also burned the onions (8 minutes on a high heat? Was that a typo?!) so I'm not sure this is completely representative!
It took about 45 minutes and it was nice but I wouldn't make it again. 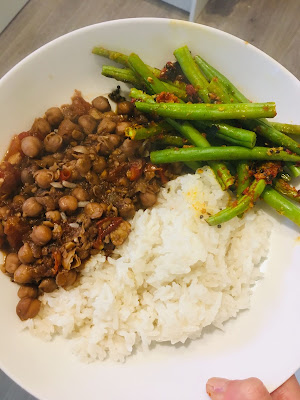 I forgot to put a timer on but this took less than an hour which was good because I LOVED it!

Quite easy although a bit hands on - cook chickpeas in tea (!), and in another pan start on the sauce. I had it with the leftover coconut rice from the night before too which saved me a job, and Meera Sodha's AMAZING green beans from Made in India.

I was a bit obsessed with this. It was absolutely delicious - like something I'd get in a restaurant. It's entirely storecupboard ingredients (providing you have pomegranate molasses which you can get from Sainsburys and it keeps for ageeeeees in the fridge) so I want to make this basically every week. 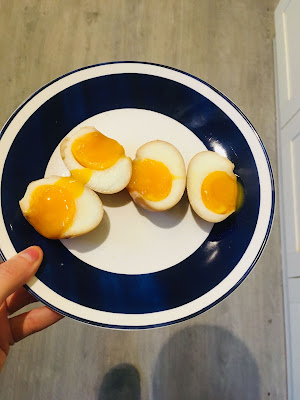 Maybe these didn't work for me as I decided to make them in the middle of making the pomegranate chickpeas.

I followed the instructions, but 7 minutes didn't seem long enough once I peeled them - by which point it was way too late!

Cold runny yolk did not appeal to me at all, but I was a trooper and had two on toast. They were more sweet than salty and I really wasn't keen. I made 5 but I couldn't face the other two! These might have been okay cooked for longer but I'm not sure if I want to bother again!

If it's not clear already, I flipping love this book. It's a great mix of midweek meals and recipes I'd want to make for a fancy weekend dinner for friends - some recipes even straddle both of these elements!

There are still so many things I want to make - the ben ben noodles, aubergine massaman curry, sping onion and ginger noodles to name but a few! - and I know there are so many recipes here I will make time and time again (as I said, I've already made the tofu and the sunshine eggs twice, and I know I'll adapt the fried rice over and over).

While there are some weird ingredients, I would say it's pretty accessible (you can definitely get by without a Sous Chef order!) and a great intro to Eastern cusine, veggie food or both! I also think it would be a great book for converting people to tofu - that soy honey tofu is insane!

I was looking forward to this book for a long long time - and it did not disappoint!