Edit: I've had this sat in my drafts for a few days. So much of what I wrote now feels so ridiculous in light of the awareness the last few days has brought to many of us. I have to be honest in my woeful misunderstanding of how racist the world is, and I've spent the last few days learning and getting uncomfortable and vowing to do better. Thousands of people have put the way I feel into words better than I ever could, so I encourage you to find those people and those places (as a white woman, Gemma has been sharing some great resources on her Instagram). I should do better and I will do better. Everything here was done and written in May, so I'll be sharing more of the resources I've been reading and using in my next post. For now though, I want to highlight the importance of writing to your MP about the UK selling rubber bullets and tear gas to the USA, this charity who are fundraising for more diversity in publishing and diversity of stories we're telling, and this list of places to donate to.
Here's what I got up to in May (and here's my One Second Every Day for May). 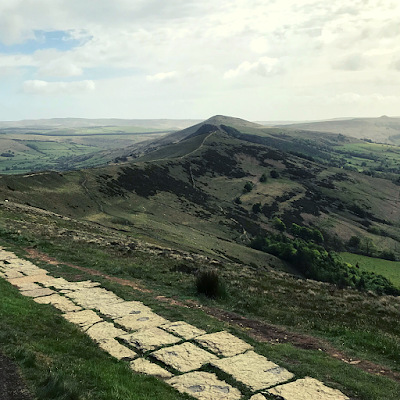 Okay this title is a tiny bit misleading because, of course, I haven't really been anywhere really, but we did do a few nice walks. At the start of the month we walked from our house to Marple along the Middlewood Way and back along the canal which was really lovely, and Phil had a day off before the Bank Holiday so we drove to the Peak District and walked up to Mam Tor and did a 3 hour walk around the peaks. We are so lucky to have such beautiful places on our doorstep. 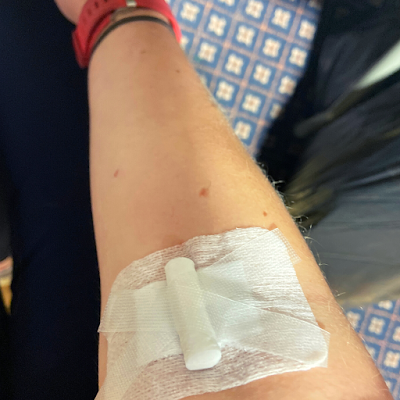 I also got to go somewhere that wasn't my house, my garden or the supermarket... for a blood donation! It was my 13th donation and I am so squeamish I can't even watch injections on TV (or fights, or any blood, or basically anything even vaguely gory!) and I look away the whole time, but I was very brave and extra careful to make sure I followed all the guidelines, and I was so glad I could give something back, especially now.

What I've been cooking and baking 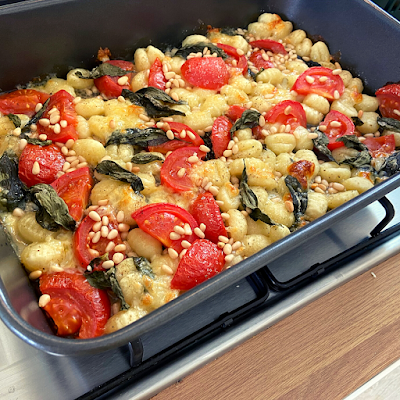 I finally, finally made the baked gnocchi with mozzarella and basil from the original Roasting Tin. So many people had told me to make this seeing as I love all the other baked gnocchi recipes in the Roasting Tin books so I finally gave this a go. And wow. Wow. I'm planning to make this again this week. It's a shame I wrote my Top 10 Roasting Tin recipes too early. Hands down a new favourite. 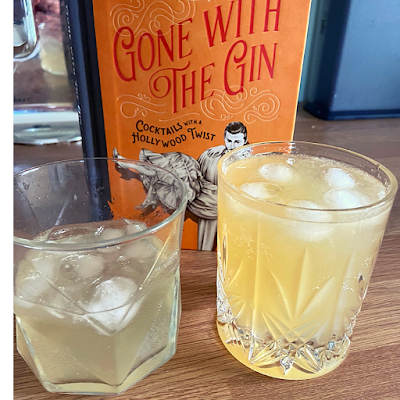 As it's going to be a while before I can browse a cocktail menu, we decided to have a night making cocktails. We had a look in our cocktail-making books and found some recipes we could make without spending double figures on spirits and I made a batch of double-strength simple syrup. We didn't have a cocktail shaker but I can confirm a gimlet tastes just as good when it's been shaken in a takeaway coffee cup! 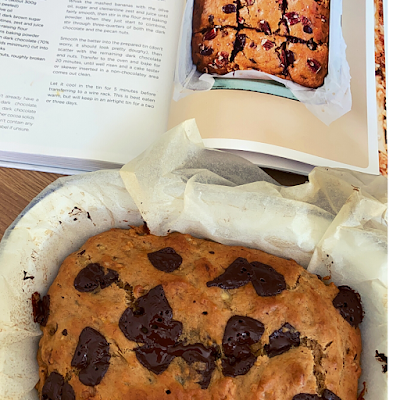 I've also been doing lots of baking - Rukmini Iyer's Rocky Road (which I talked about here), a simple lemon drizzle, a vegan banana bread from The Quick Roasting Tin when I realised I didn't have enough eggs to make the cookies I'd planned to make (I only had two bananas, walnuts instead of pecans and an orange instead of clementines but it was delicious) and Laura Goodman's super-thick homemade pizza from her book, Carbs, which is absolutely amazing. 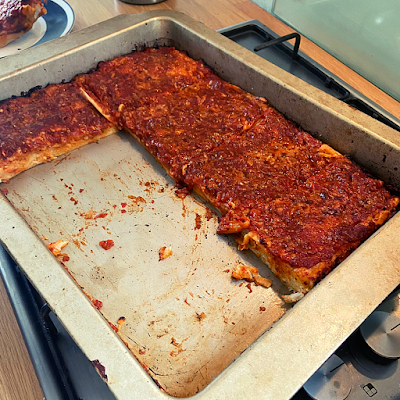 What's been keeping me entertained
I'm currently obsessed with Mariokart as we now have a weekly Mariokart night on a Wednesday with an accompanying Zoom call. I am so bad that I always come last but it's great fun. 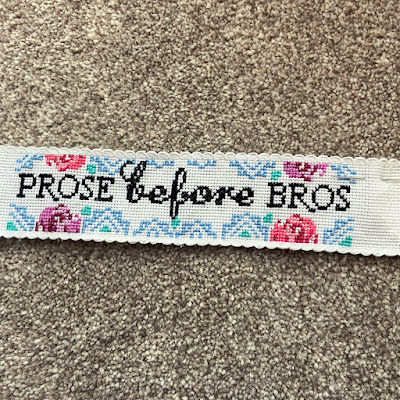 I finished my second cross stitch project and have just started my third one with a fourth on the way. I love putting on a podcast and having an hour or so of solitary stitching.
After months of being football-starved we now seem to watch basically every Bundesliga match and it's so nice to have football on TV, especially at the weekends.
I was obviously gutted when my half marathon, which was meant to be in May, was rescheduled. My last race was October 2018 but I took all of last year off with our wedding and honeymoon, and I was looking forward to a comeback (I'd also got up to 10 miles in training before it was called off). I've still been running as though I'm training (though not quite as far), so I jumped at the chance to sign up for Great Run Solo and signed up for 100km (62 miles) over 28 days. You complete the challenge of whichever distance you prefer (there were a few options, up to 280km (!)), pay a £10 NHS donation to enter and complete the challenge in the timeframe, and when you're done, you submit your evidence and they send you a medal in the post! Phil signed up too and it was great to have the motivation of each other to keep us going. I had a few rest days after giving blood and managed to complete my challenge on the 28th day and ran in total 65 miles (105km). I'm really excited for my medal!
To create the experience of missing our favourite festival, Buckle and Boots, we really enjoyed the Buckle and Boots live stream though throughout the weekend the festival should have been. It was the closest thing we could get to the real thing!
What's been keeping me going
Coursera courses are still giving something to focus on - in May I completed The Strategy of Content Marketing and The Science of Well-Being.
I've also gotten really into Behavioural Economics and have watched so many TED talks on the topic. I have loads of books about it on my to-read list and I'm hoping to do a course on the topic over the next few months.
Like everyone in the world ever, I know how good meditation is for you and I've been paying £5 a month for Headspace for at least a year but I've never managed to make it a regular habit. I am super proud to say I have meditated every single day now for over a month! At first it was a novelty, then I found it really boring and didn't see any benefit, and now I really feel like I'm starting to get it and feeling better as a result. I even practised a meditation while waiting to give blood and I really felt like it calmed me down! I really hope I can keep it up.
Finally, I've started tracking my moods through the day using an app called Daylio. I'm finding it really useful to keep an eye on what is triggering my moods (which are all over the shop at the moment). I'm using the free version for now which seems to do everything I need but I'm weighing up getting the paid version in the future. I'm planning a series of blog posts about the apps and tools I use every day for organisation and my mood so keep an eye out for those.

Unsurprisingly, another big reading month, with 18 books read last month.
Here's what I read in May:
The Glass Hotel
The Green Road
Disgrace
How the Light Gets In
Animals
The Hour I First Believed
The Book of American Martyrs
Nothing to See Here
Jesus' Son
The Rearranged Life of Oona Lockhart
The Lager Queen of Minnesota
The Blazing World
The Choice Factory
The Mothers
Dopesick
Luster
The Harpy
Can't Even
After reading Animals over a day, I decided to embrace some longer books, so I tackled 740 pages of Wally Lamb's The Hour I First Believed, and then Joyce Carol Oates' The Book of American Martyrs (752 pages). The Hour I First Believed was good but nowhere near as good as Wally Lamb's I Know This Much Is True - one of my favourite books, but I loved The Book of American Martyrs - my first Joyce Carol Oates!
Other notable mentions - I adored Nothing to See Here, The Mothers and The Harpy.
As I mentioned earlier, I've gotten really into behavioural economics so I found the application to marketing in The Choice Factory fascinating and spent a few days reading that any making notes.
I finally properly started using Netgalley this month which I how I managed to read Luster, The Harpy and Can't Even (which I actually had preordered!). I've been a member since 2016 but only this month properly looked into what I needed to do for approval and I have loads of books on my shelf I can't wait to read. I definitely recommend it if you are an avid reader and blogger or reviewer.

What I've been watching

TV
We finally finished The Americans! Ah, what a final season! We're now trying to consume every single piece of writing about it (surprisingly, not as much as we expected. Why aren't people watching The Americans?!). I keep feeling myself getting sad about how much I miss Philip and Elizabeth, and especially Paige (our favourite character).
In May we also started Killing Eve (you know what we're like for being about 3 years late for everything) and watched all of season 1. We really enjoyed it and I'm looking forward to starting season 2.
We've watched about half of Normal People so far - I really loved the book so I'm enjoying it coming to the screen (though it's makes me sooooo glad to not be a teenager anymore!) and like everyone else in the world, we are obsessed with The Last Dance.
How can I even talk about TV in May without talking about the Parks and Recreation special? Yes, I had a bit of a cry. I loved it so much.
Films
In our "film club" in May we watched Red Joan, The Circle, Phantom Thread, Peanut Butter Falcon and The Farewell. The Farewell was my pick and I'm really chuffed because I absolutely loved it! I remember exactly where I was when I listened to the This American Life episode it was based on (way back in 2016).
We also watched Three Identical Strangers which I've wanted to watch for ages. I'm so glad it was on Netflix!

As I mentioned in April, we've had more time for rewatching films in lockdown which is something I don't do often. This month we rewatched some of our favourite films -
Silence of the Lambs, Inception, You've Got Mail, The Dark Knight and The Dark Knight Rises.
Theatre
Ooh, a new category! Also in May we watched the National Theatre production of Frankenstein when it was available on Youtube. It was nice to watch something different and we really enjoyed it.

What I've been listening to

I'm on a bit of a podcast bender at the moment, which is hard because without my commute I'm struggling to squeeze them in.
We got really into the Slate Americans podcast while we were watching the final season - I wish we'd discovered it earlier and we loved the debate after each episode.
I've also been enjoying Decoder Ring, The Butterfly Effect, Brought to you by (formerly Household Name) and Uncover: The Village.
One-off episodes I loved in May - the Satisfied episode of Strong Songs and the episode of This American Life called On Delight - I can't recommend this more if you are feeling blue.

I've recently become obsessed with both the Refinery 29 and Bon Appetit newsletters. I absolutely love seeing these drop into my inbox, so a lot of my links this month are from these sources!
Food and cooking
Health and Well-Being
Misc
Charlotte x
Labels: life life lately