When I looked back over my notes for June I was surprised to find so little on my list that I did in June. And then I realised it's because oh yeah, we have a dog now.
June was consumed with Zak George dog training videos, online orders of Kongs and dog treat holder bags and cutting up pieces of cheese and researching dog food and pet insurance and collars and leads and training techniques and worrying incessantly about our dog.
I have so, so, so much I want to write about dog parenting, but the reality is we've only had Bobby for 4 weeks so I'm hoping my endless worrying and research and oh-my-god-this-does-get-easier-doesn't-it will begin to slowly eradicate, if slightly, over the next few months. Of course, we adore him. He is our best boy and the best addition to our family, there's just a lot we didn't know about having a dog!
Gonna be honest, my one second every day video for June is a good 50% dog (if you want to see even more Bobby, watch Phil's video for June) , but here's what else I got up to: 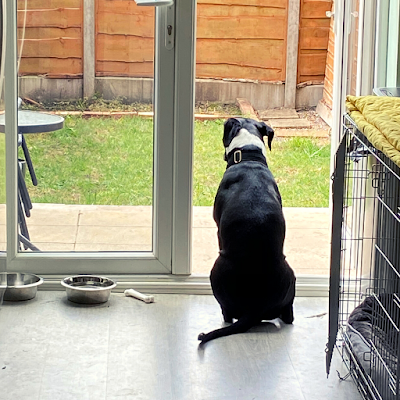 We got a dog. Did I mention we got a dog?
I've been super, super hesitant about the easing of lockdown rules and actually being able to see people and do things, so it took me a while to finally be okay with even a social distanced garden meet up at first, but while I'm still being extra cautious and nervous, it's been so good to finally see friends and family. It's been so nice to be able to introduce people to Bobby too, so we had a few garden meet ups, been to a couple of BBQs and sat in a lot of other people's gardens! 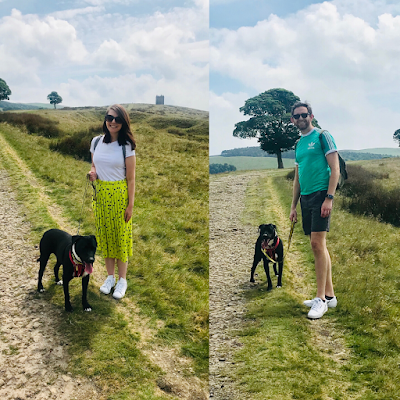 We've also been able to enjoy getting out and about a bit more. We managed to get tickets to Lyme Park, one of our favourite places, through the National Trust ticketing process. We got the tickets on a Friday for the following Saturday, not knowing at the time that by the time the following Saturday rolled around we'd, erm, have a dog?! So Bobby got his first National Trust day out last month, which is something we had been so excited to do with a dog. 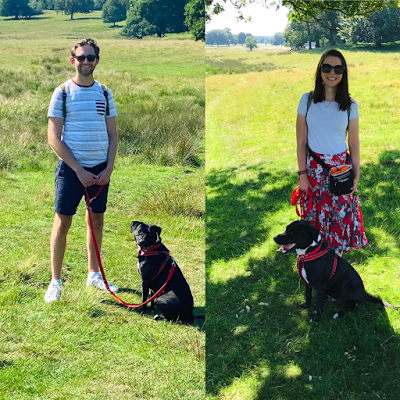 Similarly, Phil had a few days off at the end of June so we took Bobby to Tatton Park too. We don't go to Tatton often as there is still a parking charge even for National Trust members, but as it wasn't ticketed (it's big enough that it's easy to socially distance) it was so nice go somewhere new. I hadn't been in years and it was so beautiful! 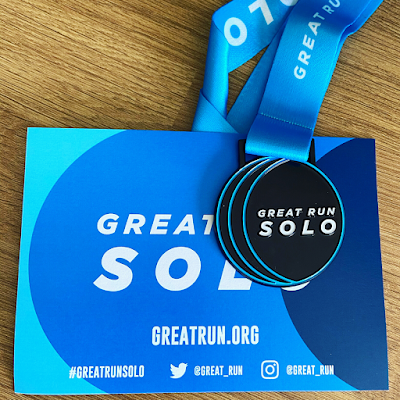 My Great Run Solo medal arrived last month, and a few days later came the news that the Great Manchester Run won't be happening this year. I've rolled over my entry to next year, but also signed up to run the 13.1 distance alone before September, for which I'll still get a medal! I'm up to 10 miles in training so I'm hoping to be able to do the full distance in a few weeks (admittedly, a lot slower than I would have on race day!) 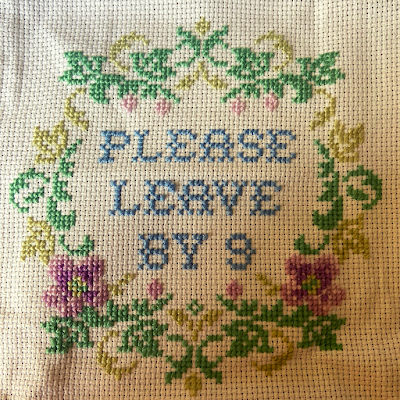 I finished the most-me cross-stitch ever. 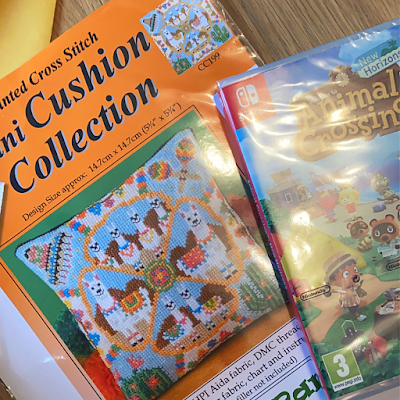 Seeing my friends last month also meant some late Birthday presents! One of my best friends got me a llama cross stitch kit which is my current project, and Animal Crossing: New Horizons which I am really enjoying playing! It's so soothing and Phil has started playing too on my island which is so nice.

One step closer to our goal, but more importantly, it's great to be back.

Even at home, your support is second to none ❤

Unsurprisingly, we have watched a LOT of football since it returned, and not only are we still buzzing from winning the league, Bobby was featured on the Liverpool FC social media channels! 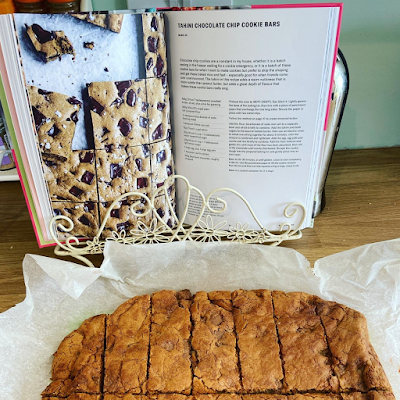 We've also been really enjoying One Tin Bakes by Edd Kimber which I bought last week (you know I love anything made in a tin!). My copy arrived on Saturday morning and by Saturday afternoon Phil had whipped up a batch of the tahini cookie bars! Phil definitely enjoys baking a bit more than me and he's really excited to cook more from this book. 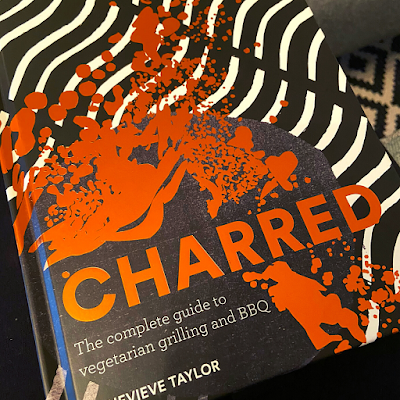 I think I'm to blame for all the awful weather lately as I finally bought a vegetarian BBQ book in the form of Genevieve Taylor's Charred. We couldn't have the BBQ we had planned last weekend as a result of the weather, but thankfully loads of the recipes can be made with a grill pan. The tofu and spring onions skewers are incredible. 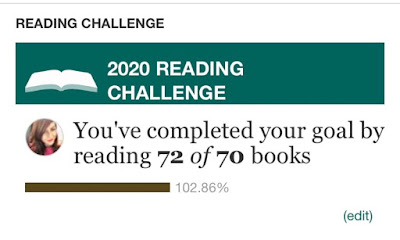 I also completed my Goodreads reading challenge for the year - in June! Lockdown has definitely given me plenty of chance to read more than usual so my 70 books goal is done. I think it's going to be another 100+ year!

Like a lot of white people, I've been really trying to educate myself about systemic racism and understand more about my white privilege. Last month I read Why I'm No Longer Talking to White People About Race and So You Want to Talk About Race?, both of which I hugely recommend. I'm embarrassed by how little I knew and am continuing to educate myself.
I've also been grateful for Netgalley again last month, with 8 of the books I read last month coming from there. Here's what I read:
- Small Pleasures
- The Vanishing Half
- Writers and Lovers
- Around the Sun
- Summerwater
- Ordinary Hazards
- Scabby Queen
- The Inconvenient Need to Belong
Both The Vanishing Half and Scabby Queen had been on my books-I-can't-wait-to-read list for months so I was thrilled to get advance copies of these. They were the two of the best books from Netgalley I read last month too, along with Summerwater.
I'm also in deep with dog training books (I have the new Zak George book to read too), so I also read Think Dog which was a gift and was really helpful!

Not much that wasn't football or dog training videos in June!
We rewatched Booksmart, cementing it as one of my absolute favourite films, and discovered that The Gift is on Netflix, so we watched that again for the first time since seeing it at the cinema (there is one particular jump scare that we always remember everyone in the cinema jumping at, and so we were really trying to anticipate it. Nope, we both jumped and so did Bobby!).
For our lockdown film club this month we watched Extraction, Love Birds, On the Basis of Sex and Your Name. Your Name was Phil's choice as we'd wanted to watch it for absolutely ages and it was incredible.
We also watched 13th, the Netflix documentary, which absolutely blew me away.
On TV, we've just started the absolutely brilliant I May Destroy You, and I found out that Michaela Coel not only went to my university, but at the same time, and studied joint honours English Lit?! I must have walked past her so many times!

Without my commute, I've not listened to as many podcasts as usual, but I am trying to squeeze them in when running, cross-stitching or just generally cooking, cleaning and getting ready.
I've been revisiting This American Life, which I took a break from a few years ago because I kept accidentally listening to repeats of episodes I'd already heard. I definitely recommend "Our Pulitzer Prize Winning Episode" (I hadn't realised how much this affected me til I got home from my run and burst into tears), "Time Out" and "Here Again".
I've also gotten super into You're Wrong About, especially the "book club" episodes on Michelle Remembers (perfect after just listening to the Satanic Panic episode of American Hysteria) and Jessica Simpson's autobiography (can't explain how much I loved this), and the episodes on Tonya Harding. I have so many episodes I need to listen to!
My current favourite podcast is the Six Degrees of Song of the South series of You Must Remember This. I have a couple of episodes to go and I'm sad it will be over soon as it's absolutely brilliant.

Niamh Caitlin - Lockdown, a time for reflection?
Black Our Story on Instagram - From slavery to George Floyd Part 1 and Part 2 (I cannot recommend these posts more to explain systemic racism and how it affects modern day black lives)
Refinery 29 - "Solving" fast fashion isn't a plus sized responsibility
Mind - Managing anxieties about lockdown easing
Dipika Writes - The Comfort of the Familiar
Stylist - How childhood dinners became a lockdown trend
Writing Between Pauses - 3 Things I've learned in a year of freelancing
Stylist - Why you're finding it hard to deal with stress at the moment
Refinery 29 - I found a mysterious cookbook from 1968 and I'm cooking all the dishes
Refinery 29 - Coronavirus has robbed me of the ability to plan and my anxiety is suffering
Refinery 29 - How I became obsessed with reading online reviews
Jezebel - I don't know what to do with good white people
Writing Between Pauses - My top 3 unpopular opinions about working from home
Writing Between Pauses - Why I love having a morning routine
The Bold Italic - Mask-induced anxiety is real
Patreon - Yes I'm Brown, No I'm Not the Nanny
The Sunday Times - Dolly Alderton on What She Learned from Teen Problem Pages
The Sunday Times - Nigella Lawson on Why She's Not Ready for Lockdown to End
Catch up soon!