If October was my month of DIY and horror films, November was a month of erm... reading and yoga?
November had some lovely moments but it's also been a really tough one. While we haven't been able to see people inside since September due to local restrictions, second lockdown has meant the same, and in fact, probably worse, anxieties that I had in the first lockdown, bringing with it the same bad sleep and nightmares I was having back in March and April (I'm normally a very good sleeper!) and we've had some other stuff going on as well which made the month particularly rough (spot Bobby limping in my one second video - his first panicked trip to the vets (he's fine) being one of the many tough points in the month).
But we're in December now, my tree is already up and I'm trying to enjoy the wintertime with candles and hot chocolate and the occasional Baileys. I'm looking forward to wrapping presents, and our first Christmas with Bobby, and even though Christmas is going to be a lot different this year, I'm still looking forward to giving gifts, even if it's virtually.
So here's what I got up to in November, and here's my One Second Every Day of the Month.

I sometimes joke that I'm too good at sleeping. I wake up in the most uncomfortable positions that I have no idea how my body is able to sleep in. As a result I have near-constant backache, especially at the moment when it seems my body is only able to settle when it's positioned like a pretzel.
I used to do Yoga with Adriene at least a couple of times a week when I wasn't running but it's fallen by the wayside over the last few months (especially now we have a dog to walk in the morning!). With bad sleep and anxiety and back pain, plus a disinterest in running in the dark in the mornings, I decided to do another 30 days of yoga and followed Adriene's November calendar, Ground.
I've been joking to Phil that Adriene is somehow psychic and every day the practice for the day has been exactly what I needed.
I've enjoyed it so much and it's amazing how much it helps calm me down. In the mornings I can sometimes be a bit too tired to enjoy it, but I've found it so helpful on weekend afternoons in particular, so I think I'm going to carry on every day through December, and then do the January 30 days that I do every year. 3 months of yoga every day!

On the 8th November, Phil and I celebrated 7 years together. We had originally planned to go out for dinner in Manchester, then our backup plan was a meal nearer home, and in the end we weren't able to do that either, so we got a takeaway from a restaurant we'd wanted to try for a while, got dressed up, drank a bottle of champagne left over from our wedding and watched La La Land. It was really lovely but I hope after not being able to go out for my 30th Birthday, our wedding anniversary or our 7 year anniversary we'll get a chance to properly celebrate our next milestone! House-wise, we are really getting there! We got new floor and carpets fitted last month which have made a huge difference. We got a radiator cover for our bedroom and changed the knobs on the dressing table and we just need a few more extra bits and I think our bedroom will be nearly there! We also caved at the weekend and put up our Christmas tree and have moved into the front room for the winter. 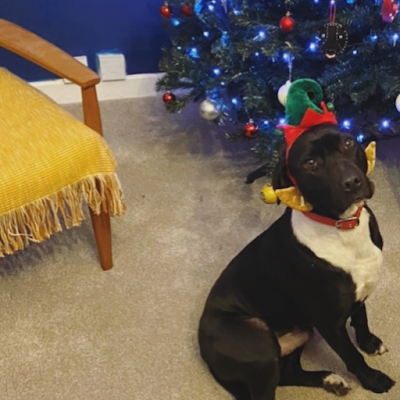 Of all the weekly Zoom calls we had during early lockdown, there is only one we still have going, our weekly Mariokart night on a Thursday. One of our Mariokart team decided if we went into second lockdown we should do a Friday night Mariokart session and turn it into a drinking game. So we ordered a takeaway from our favourite local pizza place (Pickle Rick's, if you're in Stockport) and let the games begin. It's very hard to drink while controlling your cart, especially when one of the rules is "drink whenever you're paragliding" or "drink whenever you get hit with a shell". I managed to take a lot of baby sips and my second "gin and tonic" was water with a slice of lemon in it so I fared okay, but there were definitely some sore heads the next day! 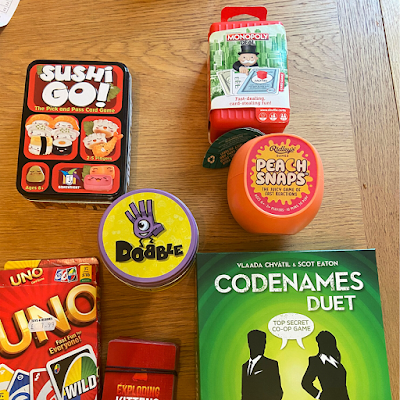 On games, we've had a resurgence of board games in our house, our current favourite being Monopoly Deal which has made me threaten divorce on multiple occasion. Codenames Duet is also as much fun as the original Codenames, but perfect for 2 players. 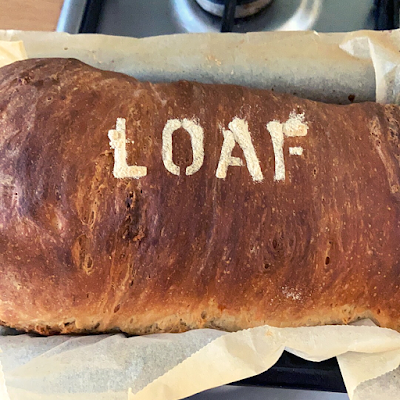 I'm currently part-furloughed, which means I get Fridays off and I've now deemed it "bread Friday". I've made Nigella's sandwich loaf from Cook Eat Repeat twice (it's soooo good!), and last weekend I made naan bread. Next week is bagels! 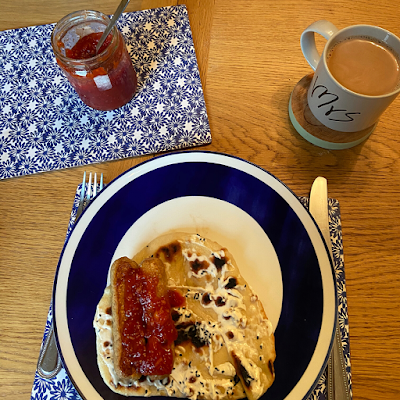 Speaking of naan, I made them as I've seen so many people get a Dishoom breakfast naan box delivered that I decided to make them myself, especially as I've owned the Dishoom book over a year and never cooked anything from it! I made my own chilli jam, own naan and used Richmond veggie sausages, but the pièce de résistance was the unbelievable homemade chai, which is basically all I want to drink now. You can find the recipe here.

I genuinely feel like all I did in November was read. Fourteen books read last month:
You Exist Too Much by Zaina Arafat
The Death of Vivek Oji by Akwaeke Emezi
The Life and Death of Sophie Stark by Anna North
A Kind of Intimacy by Jenn Ashworth
Exciting Times by Naoise Dolan
Whites by Otegha Uwagba
Please Read this Leaflet Carefully by Karen Havelin
Gratitude by Delphine de Vigan
Consent by Annabel Lyon
People Like Her by Ellery Lloyd
The Apparition Phase by Will Maclean
So Much Blue by Percival Everett
The Smash-Up by Ali Benjamin
Sabotage by Emma Gannon
There were a lot of books here which have been hanging around on my Kindle for months - The Life and Death of Sophie Stark, So Much Blue, Please Read this Leaflet Carefully and A Kind of Intimacy, all of which I really really loved.
A few Advanced Reader Copies from Netgalley here too - You Exist too Much, The Death of Vivek Oji, Consent, The Apparition Phase, Whites, Gratitude, The Smash-Up, People Like Her and Sabotage, which I listened to on audio.
People Like Her was a huge surprise and one of my favourite books of the month. I had no recollection of requesting it until I got an email saying I'd been approved, and it was the kind of thriller I wouldn't normally pick up, but I absolutely devoured it in a day and couldn't put down. It's a perfect book for reigniting you after a reading slump.
I also loved Sabotage, which is a short but punchy book, only a couple of hours on audio. I do like a bit of self-help every now and again, and this was a nice balance of kick up the arse as well as insightful help, not just fluffy self-care.
I finally caved and bought Exciting Times after accepting that after being closed since March, it was getting less and less likely I was going to be able to collect the copy of it I've had reserved at the library for the last 8 months.

Quite a lot of films this month (mostly because of the football international break! We watched 3 films in one day one Sunday purely because there was no football on):
First time watches:
Citizen Kane
Borat Subsequent Moviefilm
Krampus
His House
Rewatches:
La La Land
Into the Spider-verse
Monsters Inc
Elf
Black Christmas
We watched La La Land on our anniversary because it's one of our favourite films (we had the soundtrack playing at our drinks reception at our wedding, and loads of the songs are on our wedding video), and in our three-films-in-one-day we watched Into the Spider-verse (maybe one of my top 10 favourite films?!), Monsters Inc and Borat Subsequent Moviefilm.
We also watched Elf while we put up the tree, and had a festive horror double-bill with Krampus and the incredible Black Christmas last weekend.
We watched Citizen Kane to prepare for David Fincher's Mank coming out this week (Fincher is my favourite director) and planned to have a classic film month but this kind of fell off a cliff after Citizen Kane.
Finally, we watched His House at the weekend which I highly, highly recommend. I genuinely can't stop thinking about it.
TV-wise, like everyone else we've started The Queen's Gambit. We've watched about 4 episodes so far. We also found ourselves hooked into The Undoing and I adore Nigella's new tv series, Cook, Eat, Repeat. 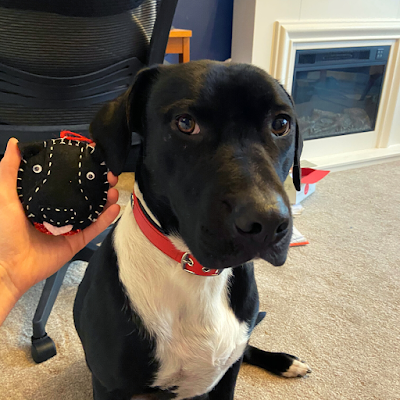 One of my best friends, Meg, has an Etsy store making seasonal decorations and she has made me THE MOST AMAZING FELT VERSION OF BOBBY. Look how thrilled he is!
Seriously my dog has a problem with resting-unimpressed-face.
Anyway, if you want a felt version of your furry pal, or an adorable smiley sprout, or a felt Father Christmas for your tree, head over to Sleighed on Etsy, and use the code SLEIGHGNDF for 10% off when you spend £5. 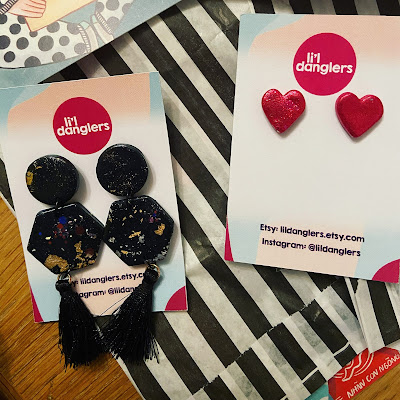 Speaking of Etsy, my other friend, Kris is making amazing homemade earrings and I got 2 pairs this week which I am veryyyyy excited about! You can visit her store here.

And finally, Christmas came early for me last month with the news that my favourite podcast, What Page Are You On?, is back! WPAYO in the reason I read so many books, that I'm so excited about books and that I follow so many cool ladies on Twitter these days. Even better, the podcast is now weekly. It's my favourite thing to remember on my Furlough Friday that there's a new episode to listen to!

I wrote about how Eat Your Books helps me manage (and use) my ridiculous recipe book collection.
I also started a series on my favourite tools for my daily routine, starting with gratitude app, Happyfeed.

Bon Appetit - The Comfort of my foster mother's kitchen
The Guardian - The only thing most of us will be wearing this party season is slightly nicer pyjamas
Random Cath - What is the pantry challenge and why do you need to do it
Alicia Kennedy - On "health"
New York Times - How to worry mindfully
New Yorker - The Joylessness of cooking
Anne Helen Petersen - You still need to have the conversation
Otegha Uwagba - "I've spent my entire life treading around white people's feelings"
The Muse - 9 Ways to stay connected and motivated
The Guardian - How should we deal with stress in 2020
Writing Between Pauses - 4 Ideas for holiday self care
The Aesthetics of Joy - How to make chores more joyful
Refinery 29 - It's okay to mourn the time you've lost this year
Writing Between Pauses - 3 Things to do when you feel anxious
BBC - How to survive a winter lockdown
Wishing you a cosy December!
Charlotte x