December was such a strange month. It started out so full of promise with lots of plans and ended with so much uncertainty and anxiety!

Phil and I ended up with one very clear positive lateral flow test (mine) and one potentially positive lateral flow test (Phil's) on Thursday last week so spent all of Thursday, Friday and Saturday isolating - cancelling all our plans, missing New Year's Day parkrun, getting our parents to do our shopping, and only left the house for a PCR on Friday. Then on Sunday we got the results - both negative! We're obviously relieved to be negative (neither of us had any symptoms but my positive result especially was very clear on the lateral flow) but disappointed we cancelled all our plans, including (perhaps prematurely, in hindsight) a trip to London we were meant to be doing next weekend (thankfully we've rescheduled so hopefully we'll be okay to go in a few weeks!).

So it's been a bit of a strange few days for us - getting our heads around the initial positive test, worrying how long we'd need to isolate for, cancelling plans, and then now having to get used to the idea of not being positive again. It's been a real rollercoaster.

December was a month of uncertainty in general, with both of us just managing to squeeze in one work social event (I was meant to have 3 in the lead up to Christmas) before we didn't really feel safe going out-out so close to Christmas. But we did manage to see most of our friends in early December, with people round for dinner 3 times at the start of the month, as well as me having a lovely trip into town with one of my best friends which was timed perfectly for when it still felt safe to do so.

So December felt a little bit subdued to be honest! Lots of cancelled plans, lots of "I don't feel Christmassy!", but I'm still grateful to have seen my friends and family over Christmas, especially as I know a lot of people whose Christmas plans were completely ruined. We did still manage to watch a lot of Christmas films, drink an entire bottle of Advocaat's-worth of snowballs, and I gave and received some lovely gifts.

My One Second Every Day for the month is here, and here's everything else I got up to.

As I said in the intro, in the end, not a lot! Though we did have a really lovely time on Christmas Day. 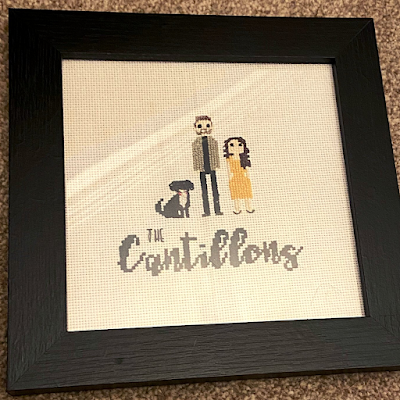 Phil and I got up early and did presents from each other. I'd secretly spent weeks making him a cross stitch of the three of us which I framed and gave him for Christmas. He was so surprised! He was even more surprised when I told him there had been loads of times when I'd been working on it when he was literally in the room and had to cover it up whenever he walked past! 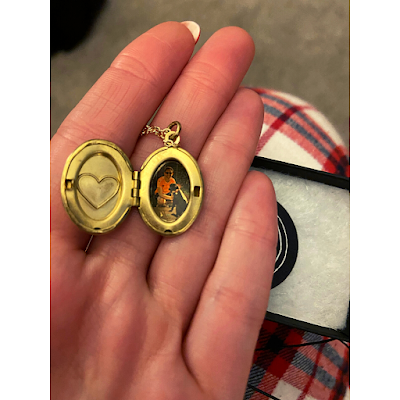 On a family theme, one of my presents from Phil was this gorgeous locket which has a picture of him and Bobby in. It's so gorgeous and I love carrying them both around with me!

Before parkrun we'd dropped Bobby off at Phil's parents, so we headed there for the morning after and did presents. One of the things we were most excited about was a board game called Superclub which we got from Phil's parents. More on that later! I also got some other lovely gifts from Phil's family.

After a few hours there we went home and got showered and dressed to go to my parents' for the rest of the day. Mum made a fantastic Christmas dinner as always and we did presents there. I absolutely love to give presents (I wrote my top tips on being a great present-buyer a few years ago!) so doing presents is honestly one of my favourite things about Christmas. I was so excited to give my Mum and Nan a Bobby mug and calendar, gift my Mum a vegetarian cooking class experience and try to pretend I didn't know my Dad didn't like the jumper I got him (which has become Phil's new jumper). I got all my favourite things too - pyjamas and jumpers and perfume!

In the evening Phil and I went into the other room and spent three hours trying to learn to play Superclub (don't worry we cracked it on Boxing Day) and went to bed in my new pyjamas! We had such a lovely day.

Some of you who have been here for a while might remember that Phil and I got engaged on Boxing Day in 2017 at Lyme Park, and while we've been to Lyme Park loads since (it's one of our favourite places) we've never been back there on Boxing Day, so we took Bobby there first thing, and then in the evening had our annual engagement-anniversary curry.

We've had a pretty chill few days after Christmas, which is particularly annoying as all our plans were going to be after the day we were forced to isolate, so we've had to cancel quite a few plans (yes I cried when I realised I wouldn't be able go to New Year's Day parkrun), but I did hit my 50th Peloton ride last week.

Seven books read in December taking me to 111 for the year (I wrote about my favourites here). Here's what I read:

Another mixed back to be honest and only one read stand-out book in December which was Brown Girls which I thought was brilliant and modern and inventive.

A lot of rewatches of my favourite Christmas films - Die Hard, Muppets Christmas Carol, Gremlins and Planes Trains and Automobiles (technically it's a Thanksgiving film but it's a family fave). We also watched Lethal Weapon (kind of a Christmas film) and rewatched Little Women (also kind of a Christmas film?).
We did three trips to the cinema to see West Side Story (which I loved), Spider-Man: No Way Home (which I also loved) and Matrix Resurrections (which I did not love).
One positive of isolating is we got really really into Brooklyn Nine-Nine and we brought 2022 in with a rewatch of one of my favourite films, Game Night.

A few new podcasts in December - Sweet Bobby which is such a juicy story!! I'm trying to get everyone I know to listen to it!
Also my beloved Virginia Sole-Smith has a podcast version of her fantastic newsletter, Burnt Toast, and I've also been listening to Welcome to Your Fantasy, a podcast about the Chippendales.

I wrote a couple of roundups at the end of the year. A post looking back on 2021 and a post on my 2021 favourite things.

This post from Refinery 29 on feeling detached from 2021 is absolutely spot on. I didn't realise how I felt looking back on the year was so prevelant.
A few good posts on COVID anxiety and uncertainty - one from Vox and this most personal piece from my fave, Anne Helen Petersen. (Not related but another AHP article I loved in December was this one on the aesthetics of cosy, luxury knitwear).
Speaking of anxiety, if you, like me have an anxiety disorder or hey, just any kind of anxiety right now (and seriously who doesn't), I found these two posts useful - 47 different things I tried for my anxiety from Refinery 29 and this Buzzfeed piece of people sharing advice from their therapists.
Two wonderful pieces from Food 52 on food and grief and memory - this piece on the magical properties of baked pasta and this one where the author learns to make her late mother's Sunday sauce.
And finally, it's not a life lately without an appearance from Virgina Sole-Smith. I love her most recent newsletter on buying 50 pairs of jeans for science.
Hope you're keeping safe and warm this January.
Charlotte x
Labels: life life lately