Hello from baking-hot July! I swear June already feels a lifetime ago!
The problem with picking up a new hobby, which for me is sewing, is it means I suddenly have that little bit less time for all my other hobbies! Hence this post being super later, yet again!
June was a really fun month! It involved two interesting and fun classes, my favourite country festival, a hen do and celebrating two years of my our good boy Bobby.
Here's my One Second Every Day for the Month and here's everything else I got up to in June...

I feel like sewing is starting to take over my life. I swear I spend most of my unoccupied minutes thinking about sewing - thinking about projects I'm working on, projects I want to work on, things I want to buy, fabric...
However I am still very much a beginner and there is nothing that hits quite like that peak of Mount Stupid when you're learning a new skill. How is there so much to learn and know? How do people learn all of this?!
Well, one of the ways people learn is by taking a class, and my friend Riven who introduced me to sewing in the first place recommended I take a beginner class with Ministry of Craft. So over the long Bank Holiday weekend last month (side note, how long ago does that long weekend feel now?!) I took a Beginner Dress-Making Class.
It was so interesting and exciting and overwhelming! I was definitely the most beginner of the four of us learning but Alison was so patient with me and used my dress to demo to the rest of the class. I learned how to cut my fabric, how to create darts, how to insert a zip, how to hem, how to insert a sleeve, how to use interfacing, how to use an overlocker... I was exhausted by the end of the day. But I did finish the class with a fully-made dress! 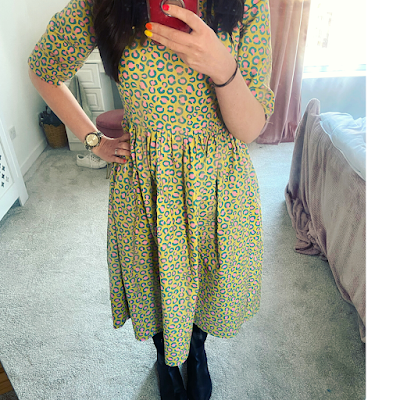 I still have so much to learn and honestly, I need to relearn basically every skill I learned in the class, but it was an amazing education experience for me and really got me even more excited about sewing! I'm already signed up to another course with Ministry of Craft in September and I've got my eye on a few more. I really recommend them if you're in Manchester and want to develop your craft skills. 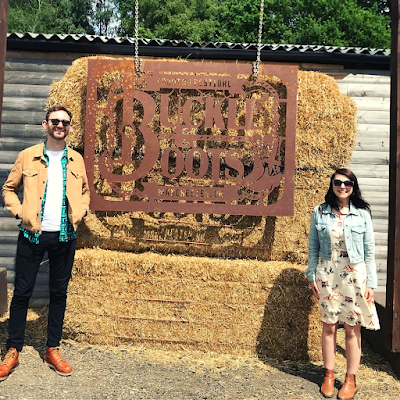 If you've been around here for a while you'll know that the summer brings my favourite festival, Buckle and Boots Country Festival! Phil and I have gone with my parents every year since 2019 and it's always one of the best weekends of the summer. We get dressed up in our country gear (this year I got a Sugarhill Boutique dress off eBay with cowboys on which I've had my eye on since my first Buckle and Boots) and have the most fun day listening to country music and having a great time. This year was no exception - all the bands were great, the drinks were flowing and we had a good old dance and sing. I already can't wait for next year! 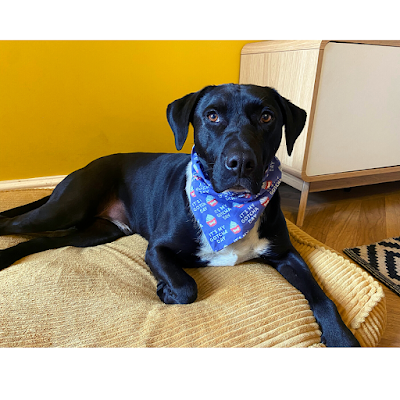 June also marked two years since we brought Bobby home from Dogs Trust. I cannot explain how much we love him and how much our lives have changed since we got him. Happy Gotcha Day, Bobby Dog! 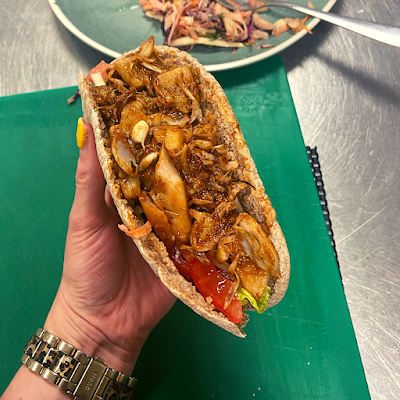 Not only did a take a sewing class last month, I also took a vegan street food cooking class with the Vegetarian Society. This was a gift for my Mum for Christmas which we finally managed to get in the diary. We made seitan nuggets and jackfruit kebabs and sampled amazing veggie burgers and vegetable bacon. It was so much fun! 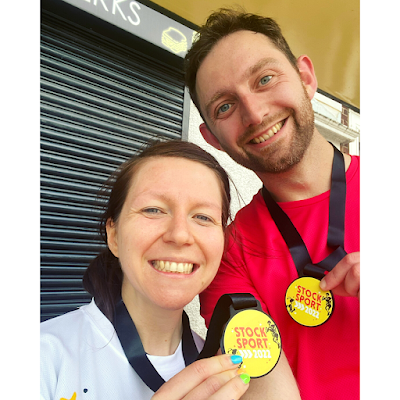 Finally Phil and I rounded off the month with a race. Stockport 10K was my first race back in 2013 but it's always a bit of a mess - the route seems to change every year, one year they had to stop traffic to let the runners cross, and it always seems to be a lot more of a challenging course than it needs to be. We had been dithering on whether to take part and only signed up a few days before as Phil had had Covid and wasn't feeling his best. Well, the least said the better! It was warm and claggy and awful to run in and the route was horrible (steps! Steep uphills and impossible downhills!) but at least I did better than Phil, who, with a few other runners, got lost and accidentally did an extra kilometer! Luckily he didn't care and hadn't been checking his watch after being ill and we've had a good laugh about it since. Still, we got a medal and a tshirt and that's always what matters!

Seven books in June:
Yes that was the second read of The Arena of the Unwell I mentioned last month... straight after I read this book for the first time.
That also inspired a few of my other June reads - Liam's first book, a non-fiction account of trans positivity called The Appendix, and Joel Lane's From Blue to Black, which has similar themes to The Arena of the Unwell.
When I started thinking about the idea of rereading books, there was one book I wanted to reread the most, Siri Hustvedt's What I Loved, which I remember as being one of my favourite books. I'm happy to say I adored it just as much second time around and I'm very excited for more re-reading of my favourites in the future.

After how much we loved Maverick in May, we created "Tom Cruise June" and watched a lot of Tom Cruise films in June. Namely rewatches of Mission Impossible Rogue Nation (one of my favourites) and Edge of Tomorrow, plus two new-to-me films of The Colour of Money and Born on the 4th July.
We also revisited two of my other favourite films in June - In Bruges and Licorice Pizza.
Finally we loved the Val Kilmer documentary, Val. I highly recommend it.

I like a juicy multi-episode story but I was a bit disappointed by We Crashed, but I have a new podcast obsession in the form of Celebrity Memoir Book Club. My favourite episodes so far have been the ones on Rachel Hollis, Jessica Simpson, Paris Hilton and Carrie Fisher.