September already feels eons ago, but October has been so busy so far it's taken me until now to finally dust off my keyboard!

I feel like the signs of how busy a month was comes down to how much I sewed, and I feel like I got quite a lot done in September (compared to October so far where I think I've used my sewing machine once so far!). We also squeezed in a little break to the Lake District.

Here's my One Second Every Day for September and here's everything else I got up to...

Speaking of sewing, I got two things finished in September and I think they're my favourite things I've made so far.

I made a yellow floral cotton lawn version of the Tilly and the Buttons Lotta dress (which I'd previously made in teal poplin). It's my perfect dress in a drapier fabric, and I also added in-seam pockets which weren't on the pattern. I've worn it so much already and I'm so proud of it!

I also made the Sew Over It Lizzie Skirt where I learned how to do pleats and also do a zip for the first time (though my "invisible zip" is far from invisible!). I absolutely love this skirt and Phil says it's the best thing I've made so far. I already can't wait to make a Christmas version!

I also did an excellent sewing class last month with Ministry of Craft called "Clone your closet" which taught us how to make patterns from clothes we already own. I took my favourite dress which I honestly just want in a 100 different colours and fabrics so I'm super excited to be able to recreate it! 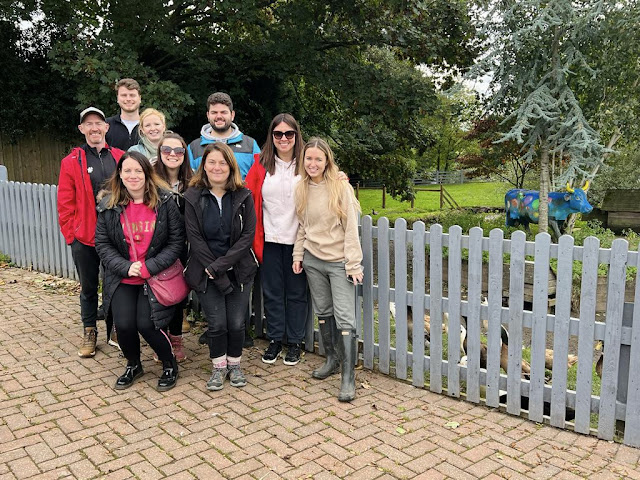 Outside of sewing I did my annual charity day for work. I mentioned this last year but at Pets at Home we all have to do one day a year of charity work which is such a lovely initiative, so in September my team went to the Children's Adventure Farm Trust, an amazing charity based near Altrincham. They provide respite and support for families and kids dealing with everything from illness to disability, to providing support for the siblings of ill or disabled children, to supporting teens with behavioural problems or families in poverty. We spent the day decorating their grounds for Halloween, ready for the first groups of kids and families of the new term to visit. It was such a good day for an amazing charity and so rewarding. I also got to feed the pigs and the alpacas which was honestly the best thing ever.

On the volunteering theme, I mentioned a few months ago that I've started pacing once a month at parkrun and how much I love it, but I've always been woefully bad at giving back to parkrun through volunteering because I always want to run! But last month I was approached to write the post-run report, and I realised there were loads of other roles I could do whilst still being able to run. So I've starting volunteering every time we run at our home parkrun of Bramhall by writing the run report and also doing the first timer briefing. I absolutely love it - I love giving back to parkrun but I also love being part of the volunteering team. I'm hoping to get my purple 25 volunteer tshirt over the next few months! 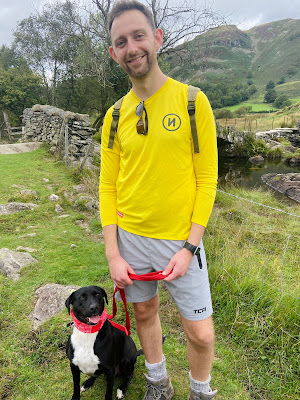 As I mentioned in the intro, we had our annual little trip to the Lake District with Phil's family and this year there were lots of us! Phil's parents were joined by us (and Bob), Phil's sister and her boyfriend, plus Phil's cousin from Australia and his girlfriend! We're actually going to Australia next month (next month!!) for Phil's other cousin's wedding, so having Rob and Fenna over chatting about the trip has made us so excited!

The Lakes was a lovely break as it always is - some parkrun tourism for us at Rothay park (beautiful views!), lots of walks, lots of time to relax and reset and some lovely family time. 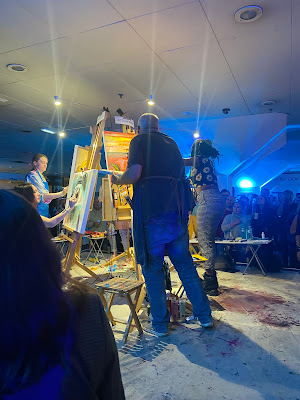 Another fun thing I went to in September was Art Battle Stockport which was an art event which took place in Stockport's old abandoned Debenhams Building. It was a really cool little event where 5 artists had 30 minutes to paint in front of an audience, and then after each round we all voted on our favourite. There were two rounds of painters, plus a celebrity charity round, and the venue had lots of cool stalls with food, drink and art you could buy, plus it was all in Debenhams! It was so different from anything I'd done before, but it was so cool to do something so unusual in the centre of Stockport. I'd really recommend it!

The days where I used to read over 10 books a month feel well and truly gone now that I try to fit in as much sewing as I can into any free time at evenings and weekends. It makes me a bit sad because I have much less time for reading, but I still manage to read a little bit every day.
Five books a month is definitely becoming my new normal!
In September I read:
My two favourites were Tomorrow and Tomorrow and Tomorrow which was every bit as fantastic and everyone said it would be, and The Book of the Most Precious Substance which was dark and twisty and fun - right up my street. I also loved Children of Paradise.

Three cinema trips in September to see Bodies Bodies Bodies, Ticket to Paradise and Don't Worry Darling. I enjoyed Bodies Bodies Bodies a lot more than I expected, and I've been recommending Ticket to Paradise over Don't Worry Darling to everyone who has asked about it. I have nothing to say which hasn't already been said but it's a total mess and I so wanted it to be good.
At home we called our film choices "shit film September" and watched cult classics Showgirls and Face/Off. Face/Off in particular is amazing and I can't believe I hadn't seen it before.
TV-wise we've been loving Welcome to Wrexham and Only Murders in the Building.

This one from Refinery 29 on personal style and TikTook trends took me right back to my early blogging days (shout out to Lookbook.nu!)

The Guardian on why we love to track our habits (which as a person with a 1348 day streak on reading every day really spoke to me). Related - Haley Nahman on the quantifiable self

Another from Haley Nahman which is from 2019 but still fantastic - are you nice or are you kind?

As a country music fan who often has to grapple with elements of the music which conflicts with my ideology, I found this Buzzfeed report on a conflict I had no idea about within country music fascinating

This piece from the Guardian feels like everything we've been saying about mental health support but it's still so depressing to see it written down - how can we address overwhelming mental health challenges without addressing the social structures which have contributed to them? "Will six sessions of CBT, designed to target “unhelpful” thinking styles, really be effective for someone who doesn’t know how they’re going to feed their family for another week". A must-read.

As a recovering (or trying to be) perfectionist, I've gotten really into the blog The Imperfectionist. I love this piece called "nothing to prove"

Finally this McSweeney's piece - what your favourite 2000s emo band says about you - is obviously my dream. And if you're wondering - "Brand New: You have cosplayed as Edgar Allen Poe."
Catch up soon!
Charlotte x
Labels: life life lately