Cramming this one in just before we head off to Australia for quite a big chunk of November! It's been in the diary for months but I can't believe it's nearly time for us to actually go! I'm so excited!

As a result of having Australia on the horizon, October was such a busy month! There were two weeks where I had something on every single night after work trying to cram in all my socialising before we went away.

So in October my social life was high, but my sewing and book-reading was low and I've realised I definitely need a bit more of that downtime in my life! Here's to remembering that and a bit more balance going forward!

Here's my One Second Every Day for October and below is everything else I got up to...

Only one thing finished in October, which was my lovely red Lotta dress! It's the same pattern as my yellow one, and the same fabric in a different colour. However, when trimming my seam allowances I accidentally chopped into the bottom of the dress and snipped through 11cm! I spent a good week dithering over what to do before I committed to shortening the length and living with it. I'm a bit disappointed but I do love the dress and the print.

While I didn't get much sewing done at home in October, I did take a 3 week evening course with Ministry of Craft called Develop your Sewing Skills. We covered invisible zips, piping, binding, overlocking, darts, gather stitching, blind hems... it was SO good. I've found all-day classes quite exhausting but 3 evening classes was perfect for me. And I came home with this lovely apron I'd made!

October also brought my 11th half marathon. I'd been looking forward to this one, training hard and hoping it would finally be the one to get me that PB I've been chasing since 2016. But it wasn't to be. I did something super unlike me and went out too fast, thought I could maintain it and was absolutely exhausted after 7 miles! I was absolutely gutted to miss out on sub 2, but for all I'm being dramatic I finished in 2 hours 1 minute and 30 seconds. While that 90 seconds is driving me insane, I know in the grand scheme of things it isn't a big deal, and I'll be training for my twelfth and thirteenth half marathons next year!

Another running milestone in October, but not mine. Last month Phil ran his 250th parkrun. SO proud of him and so happy we now have matching green tshirts! 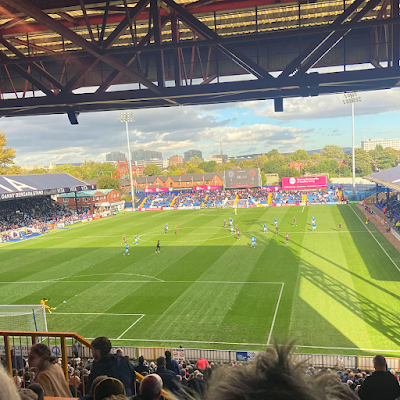 When I was a kid I used to go watch Stockport County every home game. I had a season ticket for years and then my Mum's company sponsored them for a few seasons, so we used to go for the nice meal before and get a sandwich at half time, but I haven't been for absolutely years.
My parents are season ticket holders now so last month when there was a spare ticket going I was thrilled to be able to go for the first time in ages. Watching live football is just so much fun and I'm happy to report none of the chants have changed in the last 20 years. 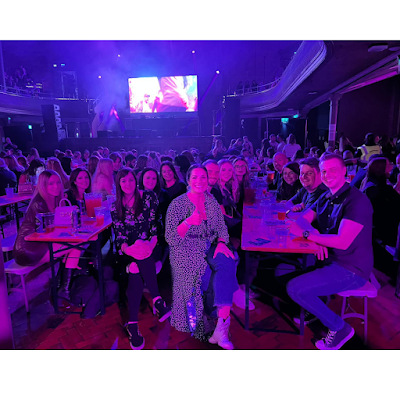 Last month I also had my first experience at Bongo's Bingo with my team at work. I've never been before (though Phil and I did do it virtually during lockdown... can confirm, not quite the same) but I loved it even more than I expected. My team even won two of the rounds!

Only four books read in October! I've lowered my Goodreads Reading Goal down to 75 books which I'll definitely hit, but I'm going to set it to only 50 next year. I do miss the days of reading 100+ books a year but I love sewing more!
I did read four great books in October though:

In our house, every year we have Horror October where we only watch horror films at home in October. Phil did much better than me and watched 16 (!) horror films (this is what happens when I go out too much and leave him at home!).
I only managed 3 horror films at home, but we did squeeze in 3 cinema trips too.
Here's what we watched:
Halloween Ends wasn't quite as much of a mess as it's predecessor but it still was really not great, however I love going to see horror films in a packed cinema on the opening Friday night. We also loved The Banshees of Inisherin, especially as In Bruges is one of our favourite films (Phil actually wrote his dissertation on it despite studying geography...), and we'd heard so much hype around Barbarian and it did not disappoint!
At home we watched the old TV series of Salem's Lot, which was fun, Triangle, a 00s horror film I'd never heard of which we ended up really enjoying, and rewatched this year's Scream which I still think is great as the original Scream is one of my favourite films.
We've also, obviously, been watching Mike Flanagan's The Midnight Club and even planned our weekend around watching it when it dropped on Netflix, but in true Cantillon household fashion, it's been out a month and we've only managed to watch 6 episodes.

As always, three fantastic pieces from Haley Nahman - as someone who hates astrology, I loved this piece on astrology's relentless appeal, this one on why we feel conflicted consuming celebrity home tour content and this one on "aesthetics" and authenticity
I'm sure we are already over the Taylor Swift controversy last month, but as someone who follows and supports a lot of fat people and anti-weight stigma activists, this piece explains a lot of how I felt about it
I am not on TikTok because I am 32 years old and have hobbies coming out of my ears but I love reading about TikTok
Sort-of related, this piece on secret menu items gaining popularity on the platform and the challenges for service workers was depressing and fascinating
I loved this long read from Buzzfeed on how Tom Brady represents a dying masculinity
Why everyone wants to be a hot, anxious girl on Twitter
Finally, you know I hate fast fashion so I loved this piece on whether the rise in businesses charging for returns will be the end of fast fashion. Here's hoping!
Catch up soon!
Charlotte x
Labels: life life lately