When it comes to buying recipe books, I am rarely impulsive. A recipe book will usually live in my Amazon wishlist for several months. Every now and again I'll click on it and read some reviews, hunt online for blogs and reviews, add it to and from my basket, then back on my wishlist.

I always have an idea of the ones that are next on my list - it's carefully planned out. At this time of year I've usually been carefully considering for months the books I'm going to ask for for my birthday. See, there are the kinds of books I buy for myself and the kind I ask for as a gift. Gift books are the ones I might not use often, but lovingly peruse on a Saturday afternoon. Aspiration books. Ottolenghi. And the ones I buy myself are day-to-day books, the ones I'll reach to for my weekly meal planning.

I didn't know much about Ruby Tandoh until I saw her book, Flavour, was February's book at one of my favourite blogs, Cookbook a month, but realised quickly I did know who she was. I was quite late to the Bake Off party, and I didn't watch the series she was on, but I realised I'd read a few of her brilliant articles in The Guardian. I don't know what made me interested in the book, as the recipes I'd seen on Cookbook a Month were mostly meat-centric, but the reviews were good on Amazon.
Anyway, after seeing it was the February book, I decided to check if they had it at my local library, which they did. So I picked it off the shelf for an initial flick through and was instantly hooked. I also tend to do extra research for a non-vegetarian book, as I have to be sure I'm not going to find I can't eat most of the recipes so this was a good way to "try before I buy." 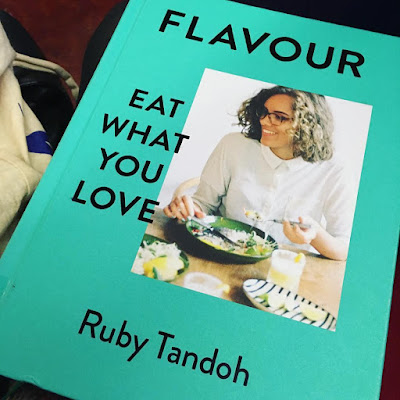 My first impression was that there was loads of vegetarian and fish dishes, everything sounded delicious and I loved Ruby's writing. I read a lot of recipe books like novels and I can't stand bad writing (although I do own a lot of terribly-written recipe books). There also seemed to be a good mix of recipes I could make midweek, and nice, slow weekend dishes.

So I took it home and wrote up a list of all the recipes I wanted to make, and there were a lot! I immediately started planning all my meals for the next few weeks.

Like everybody who has ever been on Instagram, I'm a big fan of Shakshuka, so obviously this was going to be a brunch option. I've made Shakshuka a lot of times but admittedly, I've never reall found my "perfect" shakshuka.
This had cumin seeds and paprika in, which was unusual, and was very heavy on the peppers. Ruby recommends serving it with the cornbread pancakes on the opposite page, but we had it alone so I doubled the amount of eggs (one egg per person is never enough!).
This was really tasty but needed a lot of seasoning and could have done with a splash of something acidic. Maybe some lemon juice or chunks of feta?
I would make this again but definitely with some feta and nice bread.

I was so excited to make this because it was fancy! I slipped up on getting the ingredients and ended up getting my fish from Waitrose which cost me £8 (!!!!!!!!) which I definitely wouldn't do again next time. Fish stock isn't something I usually have in, so I don't know if vegetable stock would have suited.
I didn't have blanched almonds so I blanched my own, but in retrospect I think ground almonds would have surficed, as it was hard to grind them down small enough.
This was delicious and fancy and perfect for a Saturday night.

I used sweet potatoes rather than potatoes just because we prefer them. I've made a lot of veggie shepherd's pie but never with red lentils and I wasn't sure it would work texturally as red lentils tend to fall apart, but this was actually really lovely! Porchini mushrooms are a bit extravagant but with the red wine they added a lovely flavour. I would definitely make again but maybe find a sub for the expensive porchini mushrooms.

I thought this might be a side dish from the photos, so I did some extra eggs and butternut squash. This was a nice, easy dinner but I felt it was lacking... something. It needed a LOT of seasoning, and like the shakshuka, was much improved with some feta!

Now we're back living with my parents we eat salmon once a week or so because it's something all 4 of us will eat. This was a really quick, tasty meal that I'll definitely make again.

Another thing that will suit everyone in our house is prawns, so this was another good one. I hate zesting oranges but this was really delicious. Phil and my Dad had this with noodles and Mum and I had courgette noodles. The courgette noodles went a bit watery but that was my fault, not the recipe's, and I would definitely make this again!

Ooh this was sooo good! I halved the recipe for just Phil and I. This was utterly delicous, so easy, and I will 100% make it again. I had no idea I could cook lentils like this in the oven!

Apart from Phil and I, nobody else in our house really likes banana bread. But last Sunday, I'd finished my coursework earlier than I expected, and I had a couple of bananas lying round that were past my super-yellow threshold (I'm really picky about bananas) so I decided to make this. It was so easy, so tasty and I had all the ingredients in. Plus, everyone loved it! I loved the dense texture which was perfect with a bit of butter! I can't wait to make this again next time I have leftover bananas!

This was AH-MAZING! God I could eat this right now. This was pretty time consuming - it took about an hour and a half from start to finish, but there was lots of down time so it was perfect for a Sunday evening. The chickpea dumplings were the absolute cherry on the top. I didn't use vegetable suet and used butter instead. I realised half way through I hadn't done anything to serve it with, but it was so filling and delicious it didn't need anything with it! 100% making this regularly for an easy Sunday dinner.

Conclusion
I absolutely loved this book. I would make nearly everything I made again, and I still have a list of at least a dozen more recipes that I want to try. I'm making the enchiladas tonight!

Ruby has spoken out before against the "clean eating" movement, so I loved even more that the sub-title of this book was "eat what you love." The phrase "clean eating" makes me cringe and the whole movement and what it promotes and stands for makes my blood boil, so it was so refreshing to use a book that used butter and flour and jarred pesto, and had delicious cakes in it that weren't shrouded in the idea that they were "naughty" or a "reward" for being "good"..or "healthy" versions because "oh eating refind carbs just makes you SO TIRED RIGHT OMG". Of course, loads of the recipes are "healthy" (depending, obviously, on how you define healthy) with loads of veggie-filled recipes, but I loved that the focus was on being kind to yourself and making yourself delicious food and enjoying it.

I'm a huge fan of this book, and now Ruby herself, and I look forward to making more recipes from this book!