March is nearly here! March is my favourite month - it's Phil's Birthday tomorrow, and there's also my Birthday, Bobby's Birthday, the Birthdays of my two best friends, plus the first signs of spring! I am so excited to be able to sit in the garden and go for lovely walks in the sunshine.
February was an incredibly quiet month - I nearly skipped the What I Did section completely and just wrote about books and films it's been so quiet! - but I've got a few things to look back on.
So here's what I got up to in February, and here's my One Second Every Day video for the month.

I have had the same blog layout for at least 7 or 8 years (I knowwwwww) and I just...didn't want to think about it. I knew it was out of date and old and I just didn't even know where to start.
Then a few weeks ago I just decided to have a little click around, see what options there were and poof - a new blog layout. It was so easy! And looks so much better! Why didn't I do this years ago? 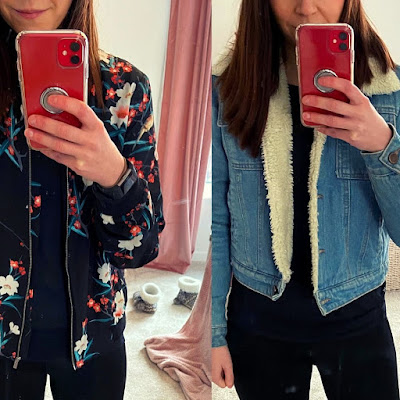 Like everyone else in lockdown I've been bored and buying stuff for mostly no reason, so I decided to maybe actually buy some things I've wanted for ages seeing as I've got a little bit more disposable income than normal? And you know I love jackets. So I finally bought myself two kinds of jackets I'd wanted for years - a denim fleecy jacket (it is so warm!) and a floral bomber jacket. Both second hand and neither costing more than £15 each. God bless depop and ebay!

10 books in February. Here's what I read: 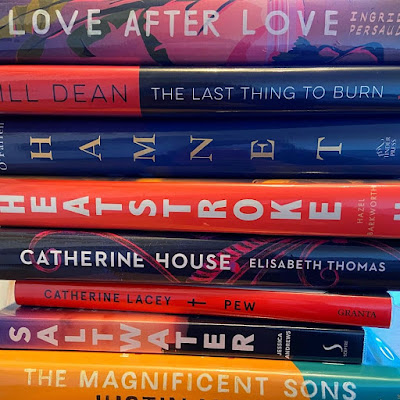 The pile of books I collected from the library

I've actually got more to read than I can cope with at the moment. The library phoned a few weeks ago to tell me I had 7 books waiting for me, and I'd already picked 2 up the week before, plus I had absolutely loads of ARCs from Netgalley of books due out in February and March so I've been chasing my tail a bit reading!
Of the above,  3 were library books (The Last Thing to Burn, Love After Love and Hamnet) and the rest were ARCs, including Cultural War Lords which I had on audio).
My favourite reads in February were Open Water and Transcendent Kingdom, both of which were ARCs (Open Water is out now and Transcendent Kingdom is out on the 4th March).
I still have 5 of my library books left and loads of ARCs coming out in March and April I need to read in March so I expect another heavy reading month for March!

First time watches this month were The Trial of the Chicago 7 and Erin Brockovich. I adored The Trial of the Chicago 7 so much it got me obsessed with courtroom dramas, hence Erin Brockovich.
I also loved Framing Britney Spears, though I agree with Anne Helen Petersen (as I usually do!) that Britney deserved a more in-depth documentary.
Finally a couple of comfy rewatches - Crazy Stupid Love (one of my all-time favourite films) and Mission: Impossible 3.