It's February! We did it! January in a pandemic!
The dog walks are slowly starting to get lighter and next month is Birthday month for everyone in the Cantillon household (yep, including Bobby whose Birthday falls right between ours).

Here's my 1 Second Every Day for the month and everything else I enjoyed in January...

One of my favourite things on Twitter is #CookJan . Started by one of my favourite people on Twitter, Alice Slater, #CookJan celebrates the joy of food and cooking in a period usually consumed by celebrity diet books and boring office diet chat and self denial (the worst).
Instead, we post what we're cooking, or not cooking, what we're eating and what we're enjoying. It's such a celebratory space and I love to support every else in my community sharing food throughout the month.
I've definitely had a few moments in January where I've very much hit the wall in terms of meal planning and cooking and oh my god how is there another meal I need to plan again?! So it's been a great source of joy and inspiration to me more than ever this year.
I'm weighing up a separate post on things I cooked in January or favourite things I've made lately - my monthly round up blog post is always long enough as it is without adding a new section, but I love hearing about what other people are eating and cooking so maybe you'd like that too?! 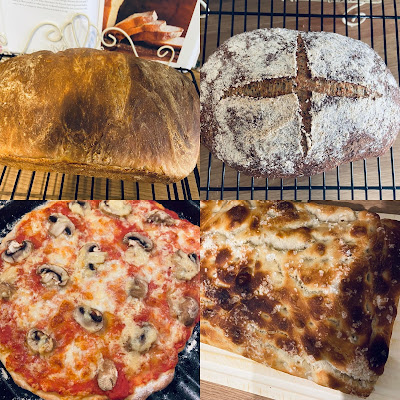 Speaking of cooking, I'm still making bread every single Friday! I've made pizza dough (this is my favourite recipe), a seedy, crunchy, wholemeal loaf from an Anna Jones recipe which was absolutely delicious, this foccacia, and of course, made several of my favourite Nigella sandwich loaves, and even got a tweet back from Nigella herself!!

I got a tweet back from Nigella what a bloody day 😍😍😍 https://t.co/nSOc7ML4SG

I am really excited to keep baking bread and trying new things - it also means there is always a delicious loaf ready for the weekend and my house always smells amazing and I find it both relaxing and rewarding - a win on all sides!
We also decided last weekend that seeing as the bathroom was the only room of the house we haven't touched so far since the start of lockdown we'd paint it. We've actually come full circle now as the bathroom as the first room we painted when we moved in three and a half years ago (when we moved in it was the brightest Barbie pink!). We painted it blue in December 2017 just so it wasn't pink any more but we've never really loved it, so over the course of the weekend we painted it all white. I'm looking forward to adding a few more decorations to it as it's definitely one of our most neglected rooms.
Finally, I got really obsessed with the Peloton Digital App, which I wrote about here.

Here's what I read in January:
The Burning Air
The Pink Hotel
Milk Fed
Fake Accounts
Mr Loverman
Stone Mothers
The Pull of the Stars
Dominicana
The Ties that Bind
Still Life with Breadcrumbs
Somebody to Love
White Ivy
Asylum Road
Quiet months = lots of reading! I'm now furloughed two days a week (it was just one before Christmas) so I'm getting even more reading done.
In January I read 13 books so I'm 13% into my goal of 100 books this year. My local library is operating a few hours a week now too so all the books I've been reserving since March are now coming available so I'm finding myself booking in once a week at the moment to return and collect.
I also read a few "what to read in 2021" lists and ended up requesting about 20 books on Netgalley! I managed a few in January but I've got a huge backlog to get through over the next few weeks!
I also read my first audiobook in months, Alexandra Hemingsley's Some Body to Love. I read her book Running Like a Girl back in 2013 when I first starting running and I adored it, so as soon as I got my audible credit for January I downloaded her newest book, a memoir about discovering her husband was trans. It was wonderful and beautiful and made me cry at the end. You can read a snippet here.
Other favourites in January were The Pull of the Stars and Still Life With Breadcrumbs, both of which I mourned when they were over.

Lots of films and TV in January as it's cold and we're in lockdown and I needed a break from reading!
Here are the films I watched in January:
First time watches:
The Virgin Suicides
Fatal Attraction
Sorry to Bother YouFirst Reform
Rewatches:
Reservoir Dogs
Oceans 11
Popstar: Never Stop Never Stopping
In terms of first time watches, Fatal Attraction was my favourite. Obviously we all know about the bunny boiling scene (and its place in the vernacular) but it was better than I expected (however I couldn't stand Michael Douglas' character and wish they'd kept the original ending).
Rewatches were all absolute bangers. I'm really bad at rewatching films because we only watch a few films a month so I don't want to "waste my time" watching something I've seen before, but these were already faves. I particularly loved watching Popstar: Never Stop Never Stopping wearing the Style Boyz jumper Phil got me for Christmas. 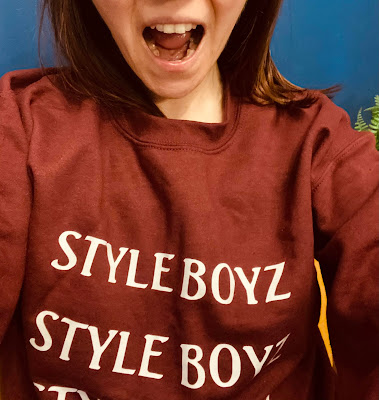 TV I watched:
The making of SM:TV Live
The Queen's Gambit
The Vow
Schitt's Creek
Dolly Parton - Here I am
I know, about 3 months later we finally finished The Queen's Gambit. I absolutely loved it. I also highly recommend watching the documentary on the making of SM:TV Live if you're a 90s kid like me.
I really wanted to like The Vow as I loved the podcast Escaping NXIVM so much, but it's so so so incredibly long and drawn out. I think I have an episode or two left and it's about to go off Now TV and I don't think I can be bothered catching up.
We're also finally caved and started watching Schitt's Creek after hearing how amazing it is from literally everyone who has watched it. We've been watching episodes on our lunch breaks together and having a few nights a week watching two or three as it's so short. We've finished 3 seasons in 2 weeks so I'm pretty sure we'll have finished it in the next few weeks.

I've been on a proper podcast binge lately. I've got a really annoying habit of "saving" podcasts that I'm excited to listen to, and then I have to be like, I could get hit by a bus tomorrow and wouldn't I be sad I never listened to The Last Days of August? Yes, yes I would.
Speaking of, I enjoyed this so much (especially as Phil can't stand Jon Ronson's voice so I enjoy listening to his podcasts around the house to annoy him) and it's a perfect complement to his previous podcast, The Butterfly Effect, which I listened to last year.
I also listened to the 30 for 30 podcast on Bikram yoga which I found fascinating, and I'm halfway throughout Chameleon, a podcast about a Hollywood scam, which I'm really enjoying so far.

I wrote a couple of blog posts in January.
I wrote about how I use the Pomodoro technique for focus and how much it's helping me working from home. I also wrote about why I'm obsessed with the Peloton Digital App.