Half Marathon Training: Twelve Point One 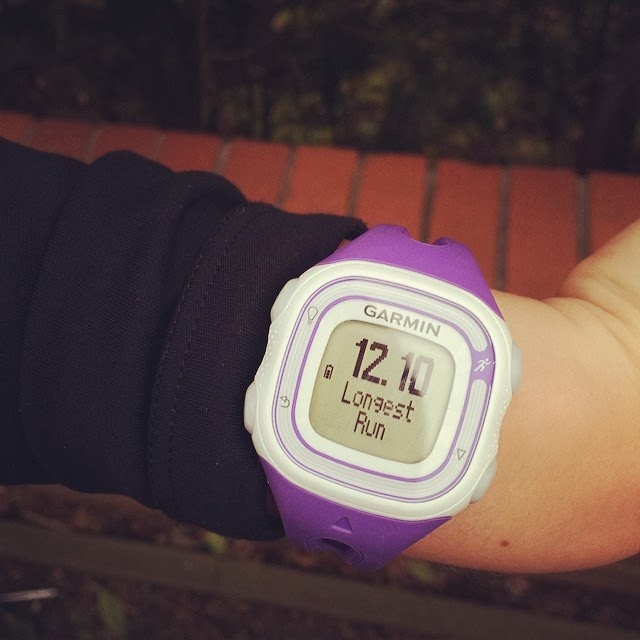 Well, I did it! 12.1 miles-my training goal!
But it hasn't been easy.
Since that awful 10 mile run a few weeks ago, running and I had a bit of a falling out.
I was running and running but it was getting harder and harder.
I was suffering from a bad case of runners burnout.
So I took a week off, and after one or two difficult runs while I eased back into it, I finally remembered why I loved running, thanks to a lovely 6 miles on a sunny Sunday morning.
And on Sunday I ran 12.1 miles.
The plan was 11. And I was absolutely dreading it.
That horrible 10 miles had really affected me and made me think that every long run was going to be just as awful. Only longer.
But I decided to learn from it.
First of all, an early run. I much prefer running in the morning to later in the day, but usually on a Sunday I stay at Phil's Saturday night, then my Dad and I do the food shopping, I have lunch, let that go down and don't normally get out til 3 or 4. It makes such a different to go early! On Sunday I was up at 7.30, ate a bagel and headed out by 9. I was back by 12 and still had all the day left. Going early meant I also had more time for the run. Because I go running so early before work, I've been known to skip my warmup (I know, I know) and on Saturday actually injured myself because I hadn't warmed up enough. On Sunday I gave myself a good 5-10 minute warmup to get me ready to go.
Also, last time one of my big issues was drinking too much water and needing the toilet 3 miles from home. I also took my running belt and my O shaped water bottle, which was annoying when I finished my handheld bottle because it wouldn't fit in the belt. Instead I had to keep stopping and pouring the liquid from the belt-bottles into my handheld one. Not ideal.
So this time I made sure not to drink much before I went for my run, filled both my belt-bottles with water and carried a bottle of Lucozade so I could throw away the bottle when I was done. I drank my Lucozade first, had a few jelly babies on the way (while running! And didn't bite my tongue!) and actually only drank one of my other water bottles on the run.
I've also been finding that I don't run as fast as I probably could on my long runs, but even when I run extra slow, I'm still exhausted by the end, so I tried to run a little quicker for the first few miles. This made me feel much more confident about my mile times and I wasn't actually much more tired!
Finally, factors beyond my control- the weather. Going early definitely helped avoid having to run in the dark, but it was dry and fairly mild, if a little windy. I hate running all layered up in hi-vis vests and rain jackets, and I think that made a huge difference to the enjoyment of my run.
The run itself was a nice route, with some hills to get me ready for my race (it's meant to be a really hilly course!) and I managed to get my Lucozade to last 6 miles (I can drink a 500ml bottle of water during a 5K. This was a big deal), and although the run was long, it didn't feel laborious. It's funny how I see long and short runs so differently. On a short run I just want the miles to be over, on a long run I kind of ride the waves a bit more. I just go one mile at a time. And it's relaxing.
The miles seemed to fly back (twice I didn't even check my mile time cause I was too in-the-zone to notice my watch had beeped) and after 9.5 miles I was still feeling alright.
It was then that I decided to go for 12.1.
I knew 12.1 was a big deal. My training target. And I knew how relieved I would feel if I hit it. I would be ready for my race, four weeks before the day. That big, scary 12 mile run would be over.
So instead of turning down the road that would get me home in another mile and a half, I kept going.
And going.
And then my watch said 12 miles.
I was all ready to sprint my last 0.1 miles.
But my legs just didn't go.
I managed to run that last tenth of a mile as quickly as I could.
And then I stopped. It was over.
I checked my Garmin in disbelief.
12.1 miles.
One mile away from my race-day distance.
And it was done.
And 20 seconds a mile faster than I had estimated.
I had a very long cool down, a good stretch and a well-deserved shower.
Okay I'm still aching three days later. Okay, my run this morning was pretty much a walk with a couple of five minute runs thrown in.
But I did it.
Roll on race day.

Speaking of race day, if you do want to donate to my race fundraising (which would be utterly amazing-it's all for the Alzheimer's Society), you can do so here. Thank you so much you wonderful people. Thank you for always pushing me to do this. Your amazing comments keep me going.
Labels: half marathon running