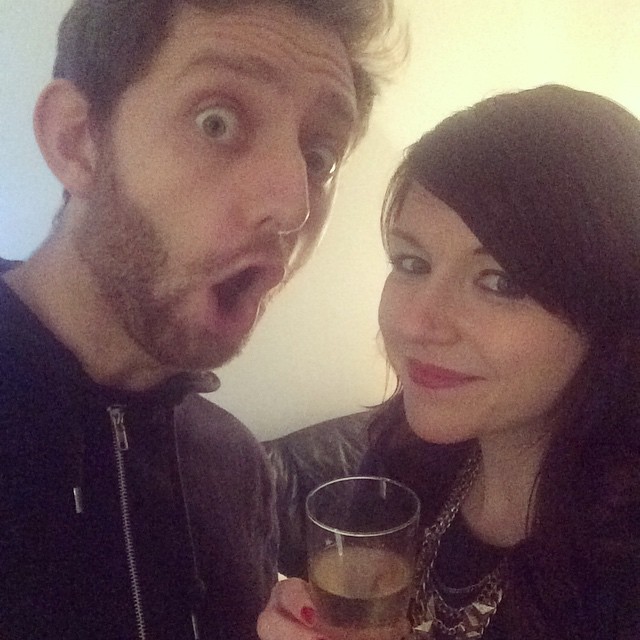 Yeah. I caved.
Come on, I'm a goal-making machine. Did we really think I wasn't going to make any this year?
I think the biggest thing for me is I'm scared to publish my goals out here on the internet in case I don't achieve them. As I said before, instead of motivating me, that scares me. I'm very self-motivated but that means I also put a lot of pressure on myself to keep pushing towards my goals all the time. And then once I hit them I'm straight onto the next goal. There's always another thing I can be pushing towards. I'm kind of addicted to reaching goals, but on the flip side I can't bear to not hit them.
Take for example my book reading challenge. I wanted to read 30 books in 2014, but after spending three months reading Stephen King's epic The Stand at over 1000 pages, I realised that wasn't going to be possible. I just had too many other things going on at that time. I reset my goal to a much more manageable 20 and in the end read 24.
I've talked before about trying to be all things to all people, and this can be my problem. Too many goals, too many things to focus on, resulting in no success in any area.
Last year I trained for a ran my first half marathon, got into strength training, got a park run PB, ran my first mile under 10 minutes, ran 3 races, completed Insanity, read 24 books, finished my TEFL course, stopped biting my nails and had three different jobs!  It was a big year for successes, but most of those were goals I hadn't even dreamed of completing on 1st January 2014. I think it's important for me to just let these things happen, instead of forcing myself.
So for 2015, my goals are small but specific. I don't agree with vague goals that can't be measured - instead of "keep working out regularly", I'm going with "keep exercising 5-6 times a week". There are going to be a lot of changes in my life from 11th February onwards so my key focus is really going to be setting new routines - routines for exercise, for cooking, for food shopping, for seeing friends, for blogging, so it's going to take me a little while to just feel "me" again (I'm nothing without my routines!).
Okay that was a lot of waffle! Here are my 2015 goals (in no particular order):

Run a 5K in under 30 minutes
I am getting so close now. My last Parkrun PB was 32:09 and I've got my average mile time down to 11 minutes or below now, so this is hopefully only a matter of weeks away. I'll definitely be there by the end of the year! This has been a goal of mine since I started running, but my half marathon really taught me to run slow and long which really messed with my speed for a long time but with no half marathon this year it's gonna be the year I do it!

Complete Insanity again
I absolutely loved Insanity but it was hard work fitting it in every day. When I completed it last year I wasn't working so I had much more time to squeeze it into my day, but I'm determined to complete it again this year.

Hit 40 Park Runs
At the moment living at home, my nearest Parkrun is literally round the corner. When I move into Manchester it's going to be a bus ride away. But I'm determined not to let that stop me. I'm currently on 19 Parkruns and I'm planning to run every weekend between now and moving out, to put me on 24 before I leave. I'm determined to keep heading down to Parkrun as much as possible, even though it's not quite as convenient as it once was.

Keep exercising 5-6 times a week
I love my workout routine at the moment - Monday is abs or stretch, Tuesday and Thursday I do Chalean Extreme, Wednesday I do T25, Friday I rest and the weekends are for running. I know the first few weeks of moving into the flat will cause some changes and I'll need new routines but once I'm settled in I want to get back into a regular routine.

Read 25 books
Not as ambitious as most people with their 100 book plans, but with losing my commute in February I want to still make time to read. 25 books isn't loads but it's realistic for me.

Go to the cinema twice a month
One thing I have to thank Phil for is reigniting my love of film. He's had a Cineworld Unlimited card for years now and when the potential Oscar-winning films starting coming out in November I finally caved and got a card. I have to go twice a month to make the card worth it, but seeing as I went 5 times in November I think I'll probably be okay!

Take some time for photography once a month
2013 was a great photography year for me and I took two photography courses at night school. 2014... not so much. Running sort of took over last year but I really want to get back into taking photos regularly. Once I month I want to either get out there or spend some time reading about photography to get myself enjoying the hobby once again.

Keep working hard at my job
If 2014 taught me one thing it's that you can't take anything for granted. I had three jobs in 2014. This year I want to stay where I am, keep working hard and hopefully reap the benefits of that.

Learn to cook meat
I've been a pescatarian since I was 11 years old so learning to cook meat has never been a skill I've needed. However, as much as Phil enjoys my veggie delights, I know he'd love it if it could cook meat for him occasionally.

Take at least 3 weekends away
I don't know whether we'll get a chance to get away abroad this year with the flat. I'd love to, but I'm just as happy to have a few weekends away in the UK. I've got my eye on Dorset (thanks, Broadchurch) and we've been hoping to get a weekend away in Liverpool at some point.

Do one cultural activity per month
We won't be living in Manchester city centre forever so I really want to take advantage of it while we can - visiting museums, art galleries, walking tours, theatre trips.

Eat at 10 different places
I love going to new places to eat, but I do have a soft spot for my favourite places. As with cultural activities above, there are so many great restaurants in Manchester and I want to experience as many as possible!

Save up
I'm pretty good with money, and I've been saving up a lot while I've been living at home, but once I have bills to pay and food to buy it's going to get much more tricky, but it's really important to me to stay on top of money and keep putting something away each month. I've recently started to take on some freelance work which I'm hoping will increase this year and I'll be putting all that into savings.

Volunteer
My colleague Natalie and I have been talking about volunteering at a soup kitchen when I move into Manchester and I really want to make sure I do something to give back in 2015.

Keep blogging!
As with running and cooking and my other routines, things are going to change when I move into Manchester. Blogging is going to be a challenge until I can figure out when and where to take my photos but I'm confident I'll get my routine sorted. Blogging hasn't been as easy the last few years with working full time, but I can't imagine my life without this blog!

Use my free time effectively
When we move, I will be a grand total of 5 minutes walk from my work. With no commute, that's nearly 2 hours a day I'm getting back on my day. I want to use that time effectively. I don't want to say I'm going to start a new hobby or start learning French because that's too tying, but I just want to be sure I make the most of that extra time, whether it's more reading, more freelance work, more photography, or even just using that time for the food shop. I don't want to waste time in 2015.

Stop putting pressure on myself and be happy!
Okay this goes against my rule of no intangibles. But Phil and I are moving in together - that's so exciting! It's gonna be stressful and tiring but oh it's going to be so brilliant. I need to remember how excited I am right now when I start getting overwhelmed. I'm going to miss some running, I'm probably going to eat takeaways far too much when we first move in, I might not read my two prescribed books per month but I just want to enjoy the process. Life is a marathon, not a sprint.