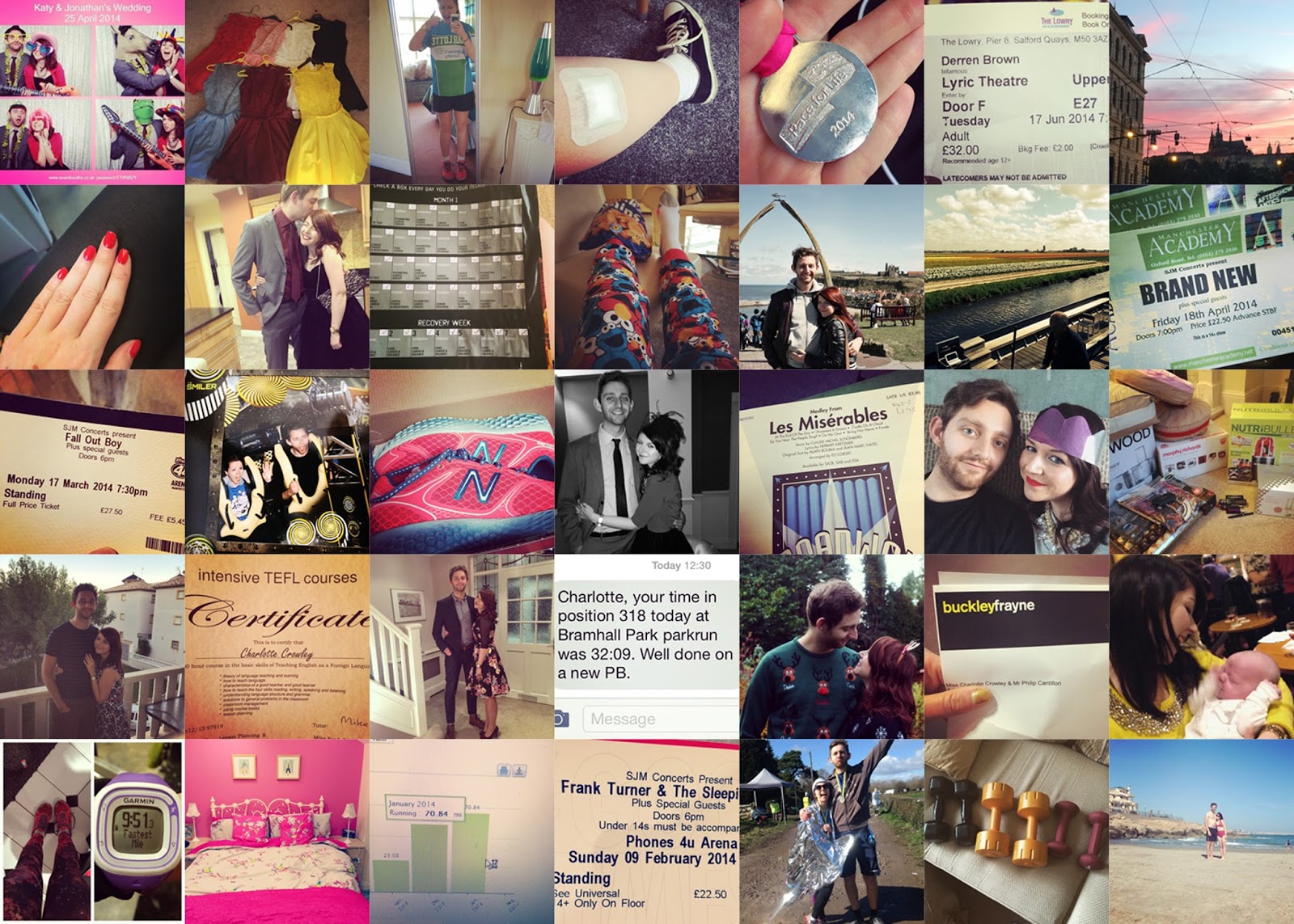 It's hard to know where to start with 2014. I feel like so, so much has happened this year, both good and bad. It's been a real roller coaster year. There was a point in the summer where Phil and I hit a real low - I'd just been made redundant from a job I loved, his best friend had had some terrible health news, he'd just been in a car accident and written his car off. It was the lowest point of the year and the lowest point we had gone through in our relationship. We reflected then on a terrible year.
But now, 6 months later, things have changed. I have a new job that I love, after some ups and downs, Phil's friend has had good news, Phil has a new car and we're about to move in together. It's easy at this point in the year to forget about those dark days when I would spend whole days crying and Phil would be pained and silent. But maybe we'd rather just
forget them and focus on the positives.
No year is solely good or solely bad, but over the years I had an annoying habit of labelling years "good" and "bad" and I would wrongly decided that good years and bad years would alternate - deciding the fate of the year ahead on January 1st.
2014 is a year I will never forget, for the terrible bad and the joyous good. It's the first full year I've spent with Phil, which means everything I've experienced has been shared, and I'm forever thankful for that. I'm realised this year exactly what I'm made of, what I'm capable of, and how much more I can do. I ran a half marathon, struggled through my first fitness injury which put me out for months, I finished the Insanity programme, I got a new job weeks after being made redundant and was successful at every interview I had. I've learned how to look after another person in their times of need. I've learned that nothing is insurmountable with the help of the people I love.

Here are the things I will remember 2014 for:

- I stopped biting my nails - finally! - after a lifelong habit. Thanks to 3 months of acrylics I never went back to biting them and now have beautiful nails for the first time in my life!
- I trained for, and ran, my first (and definitely not my last!) half marathon. It was tough and painful and training took over my life, but I can't wait for my next one.
- I also ran the Great Manchester Run and the Race for Life, taking my total to 5 races now.
- I celebrated a year with Phil! The longest I've ever spent with anyone. I cannot wait to move in with him! Which leads to...
- Phil and I signed for a flat! We move in February and I am giddy with excitement
- I was made redundant in June. If you remember last November I handed in my notice at a job I hated and last January I started a new job. I enjoyed what I did, but when the opportunity came up to move into the social media team it was my dream. Unfortunately, only 3 months after I moved department I was made redundant. The day my redundancy was announced was one of the worst days of my life.
- But, after a few weeks of redundancy, I found a job that I really love. I'm so much happier at Axonn than I was at my previous jobs. Everything happens for a reason!
- In August, I completed the Insanity programme! I absolutely loved it and cannot wait to do it again!
- But as I was finishing the programme, I suffered my first proper fitness injury. I sprained my foot and was out from exercise for over a month and didn't run for two months. I also had to pull out of the Stockport 10K - my favourite race.
- However, I developed a new workout system for myself and started to seriously strength train which I absolutely love
- Which led to better running! In November, I got my first park run PB in over a year, and in December I ran my fastest ever mile, and my first mile under 10 minutes!
- I ran over 325 miles in 2014, even with a four month break from running over the summer
- I had some great holidays this year - Amsterdam for a hen weekend in April, my first holiday with Phil to Prague in June, Whitby with Phil's family in August and Spain with my parents in October
- I didn't quite hit my goal of reading 30 books this year, because it took me 3 months to read The Stand, but I did read 22 books!
- This year I completed my TEFL course! I'm not sure if I'll ever use it, but it's great to have a new qualification to add to the list!
- I got my first solo in my choir this year and we had two big concerts in 2014!
- With two races for charity this year, I raised £800. £550 from my half marathon to the Alzheimer's Society and £250 for Cancer Research
- We also had a new member of the Crowley family in 2014 - baby Leo, my cousin's little boy, who was born in November

So what's ahead for 2015? For a person who likes to push myself, I actually really hate making goals. Goals stress me out. I'm a pretty motivated person anyway and don't need the threat of goals to encourage me to do things - I'm probably just going to do them anyway! Most of my goals for 2015 are to just keep on keeping on - keep running (I do want to run my first 5K in under 30 minutes next year, and run my first 10K in under 60 minutes), keep strength training, keep exercising 5-6 times a week, keep working hard, keep enjoying what I'm doing, keep trying new things, keep being happy and never be bored!

Here's to a great 2015!
Labels: goals new year reflection round up