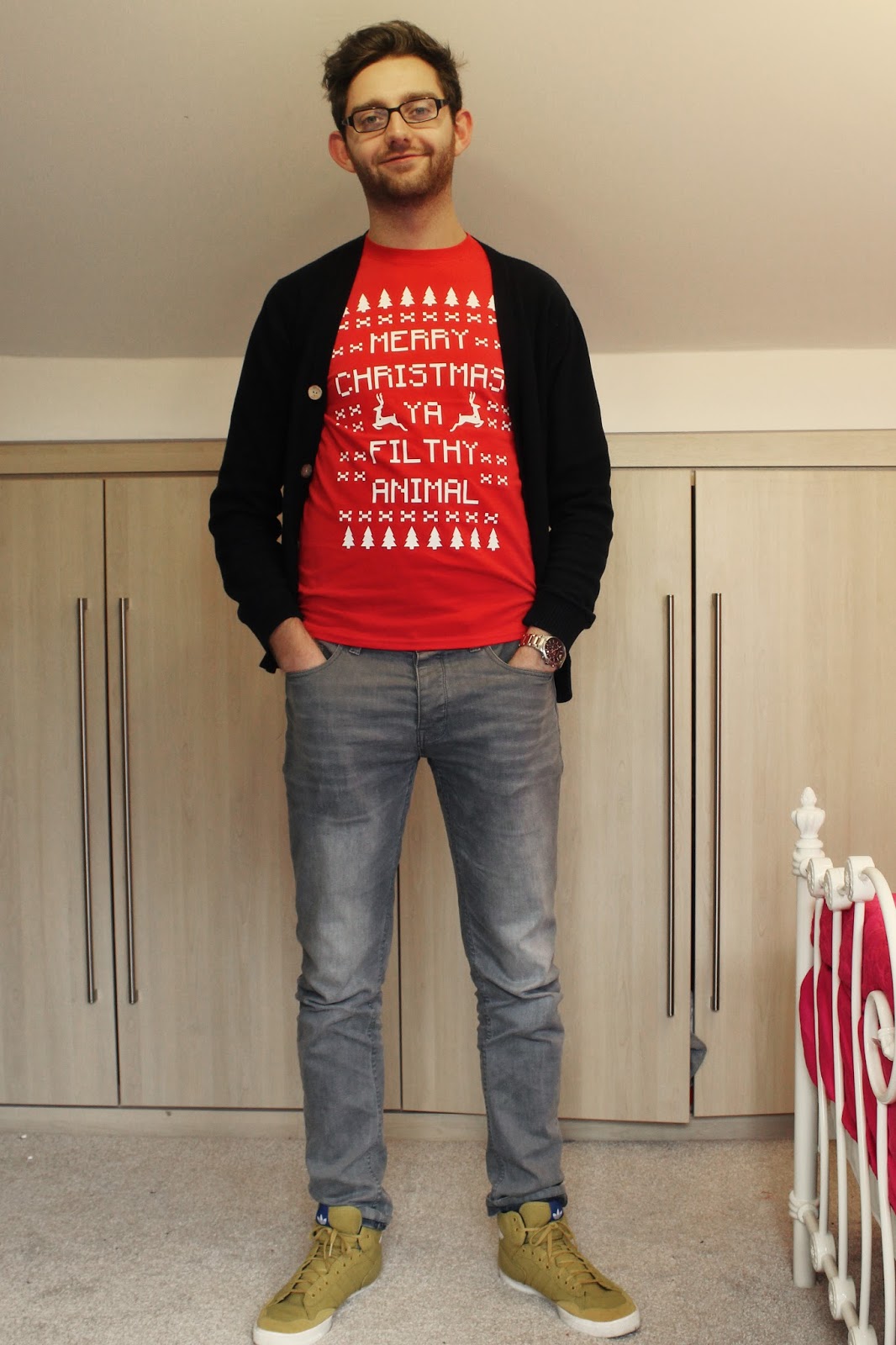 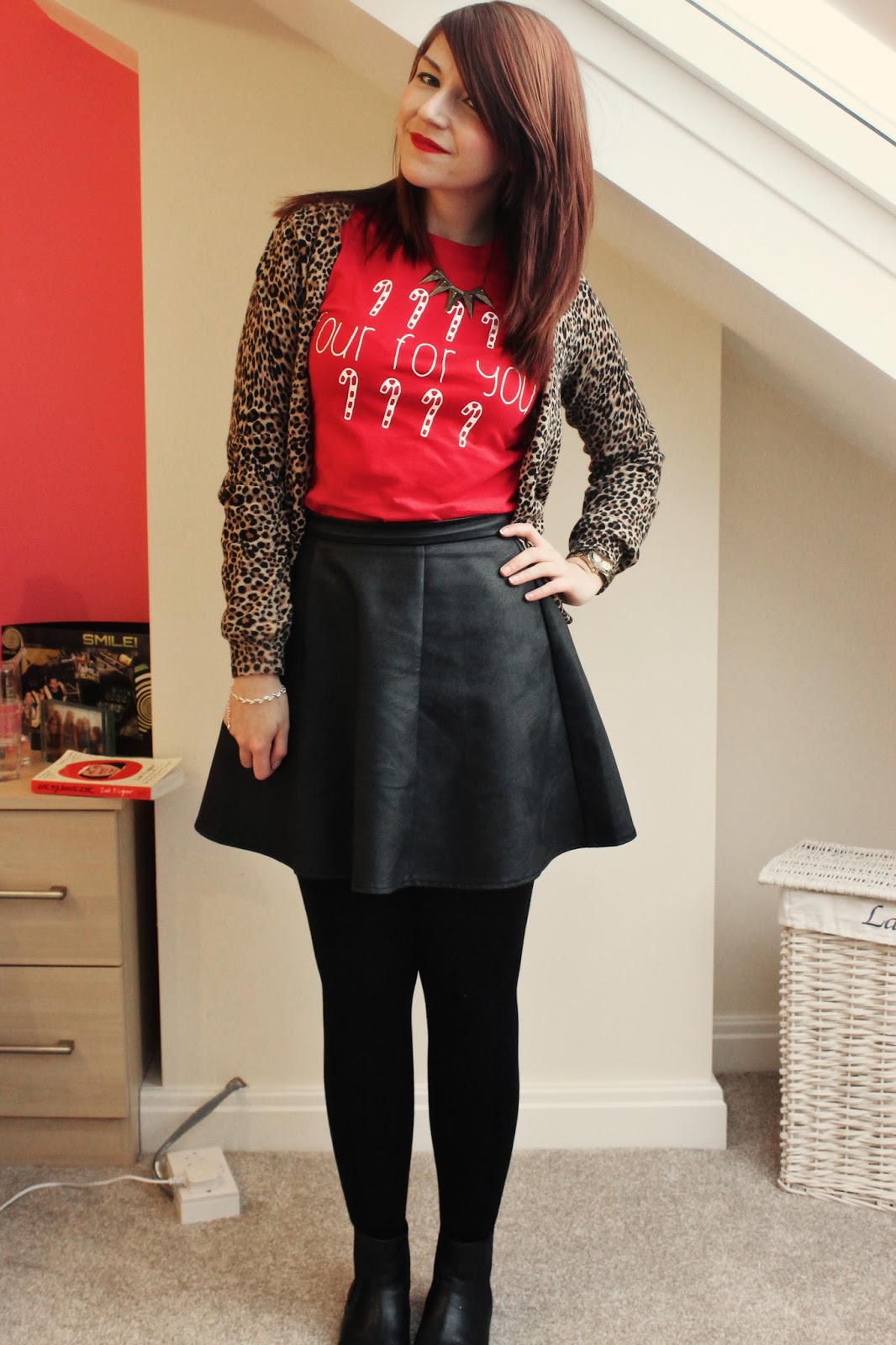 True story - Phil is too tall to fit in my usual photo-taking spot. It was absolutely chucking it down when we went to take these photos so I said " oh we'll do them in my room. You just stand there." Phil looked at me blankly. "I won't fit there." To which I replied "of course you will." Now, I wish I had taken a photo of Phil trying to duck to fit into the space. I guess I don't think about the fact that he's a foot taller than me. I also live in the loft room so it has a lot of slanty walls, hence my wardrobes above. But I like that they kind of look like normal-sized wardrobes so he looks like a giant. Anyway.
Apparently there are people who don't like Christmas jumpers. Not us obviously. But people. So Lush tshirts decided to let those jumper-haters get in on the Christmas apparel and created a line of festive tshirts, and they asked Phil and I to give them a try. OBVIOUSLY I picked this Mean Girls tshirt ("Four for you Glen Coco! You go Glen Coco!") and Phil went for Home Alone. We absolutely love our tshirts and they're a nice change from Christmas jumpers (although we do have three each now...). I also wore this tshirt for Ultimate Power on Friday night because it was their Christmas night. With a sparkly skirt, obviously. 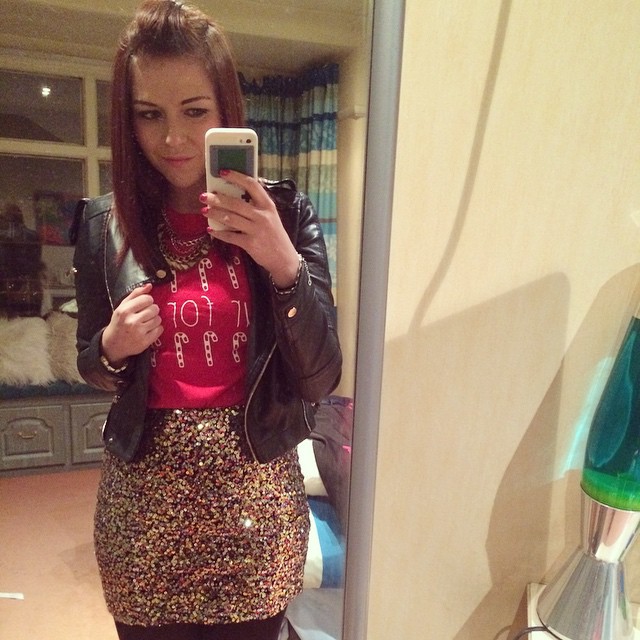 I've had a pretty festive few days, which is good cause I've not really been in the mood yet (except for exclaiming, every now and again "oh my god it's Christmas NEXT WEEK!"). Every year my Mum and I have a bit of a "festive day" where we put up the tree, listen to Christmas music, watch Elf and drink Baileys, so we made mince pies and did all that on Sunday. I also wrapped my presents and wrote my cards so it feels very close now! Then yesterday my choir were singing Christmas songs at a nursing home. We did it last year too and it's so lovely to do and the old people there really seem to enjoy it.
I'm really excited for Christmas this year. We always have family (and Phil!) round on Christmas Eve, but this year on Christmas Day we're doing a Vicar of Dibley and having two Christmas dinners! Last year we realised that with Phil's family having dinner at 12 and we having dinner at 6 it was totally possible for us to do both. Plus we both have all our traditions in the morning so we can spend the afternoon together. So the plan is Christmas dinner at Phil's family's first, then Christmas dinner at mine later on! It's gonna be lovely to spend Christmas together properly this year.

It's my 5 year blog anniversary next week so stay tuned for a post on that!