Race for Life with Scottish Power 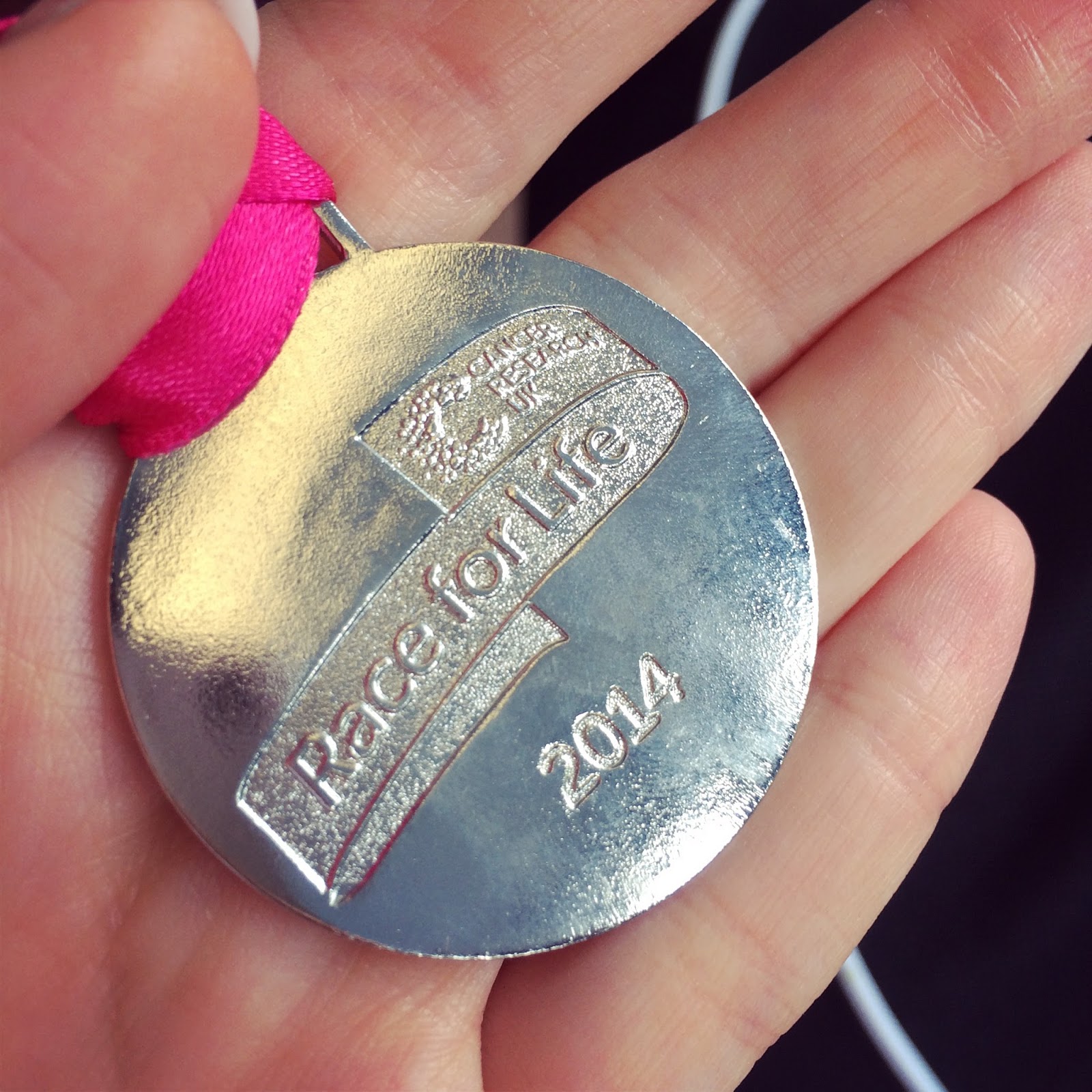 You've seen The Godfather right? The Godfather is my second all-time favourite film (my favourite film is Fight Club, if you're wondering). You know that bit when Johnny comes to Don Corleone and tells him about the big film producer who is trying to screw him over and won't give him the part he wants. And Don Corleone says "I'm gonna make him an offer he can't refuse"? Well, this is kind of like that. But with less blood, guns and cannolis.
Basically, I'd been having a tough time with running (in fact, I've been having a tough time with life recently!) and was all set to focus on Insanity for the summer and then get ready to train in September for the Stockport 10K until an email popped up in my inbox from Scottish Power. The email asked me if I would run the 5K Race for Life for them in Heaton Park, and in return they would donate £250 to Cancer Research.
Don Corleone would have been proud. How could I turn down an opportunity like that?
Over the last few weeks, my Twitter, Facebook and Instagram have been awash with pink. I know dozens of people who signed up to run, jog, or walk the Race for Life. The Race for Life is quite often the first 5K people sign up for, and it has a fantastic reputation as being a fun, accessible experience and not a big, scary, competitive run. After a break from running I was sure this would be a great race to help me to fall in love with the joy of running again. 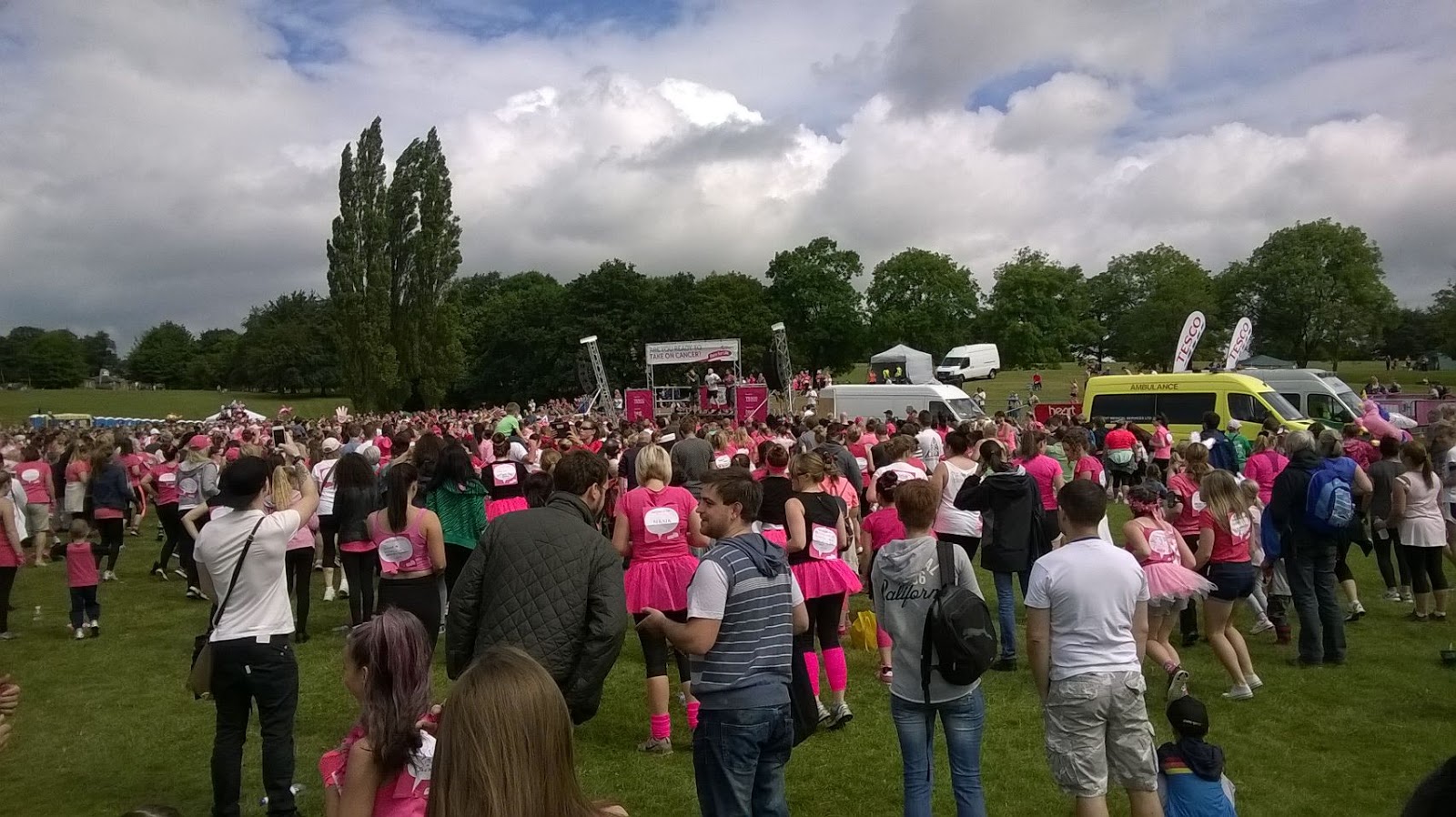 Phil and I arrived to an ocean of pink.
Women of all shapes, sizes and ages. Children. Dogs. Babies. Everyone was there to take part in the fight against cancer. The atmosphere was super-charged, electric and exciting. But of course, there was a strong sense of why we were there. Because everybody there had been touched by cancer in some way. Some people had signs on their backs with the names of the people they were running for, some survivors, some not so lucky. During the minute's silence at the start of the race, I found myself close to tears reading some people's messages, but also proud that everyone was coming together and doing something amazing. 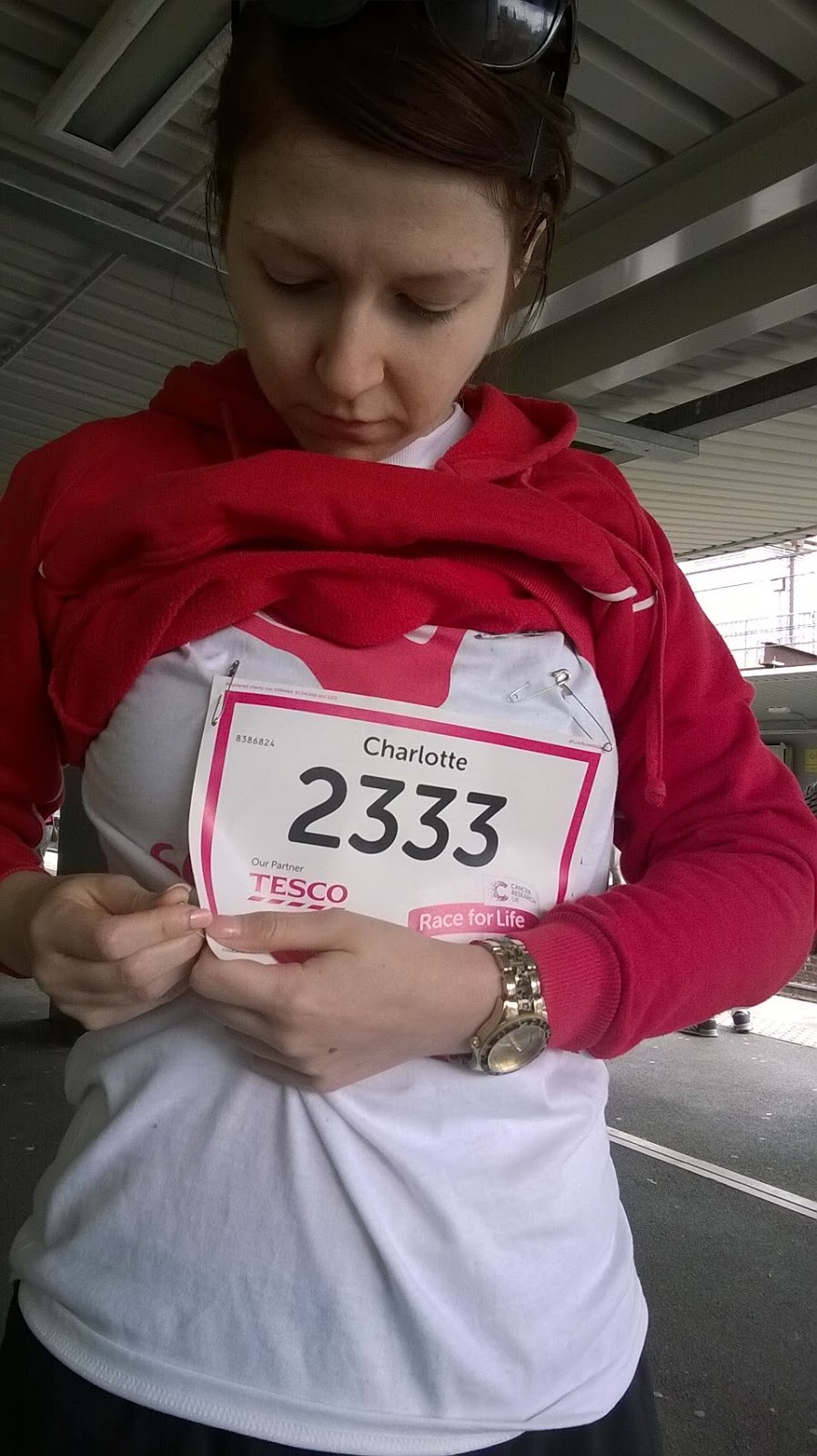 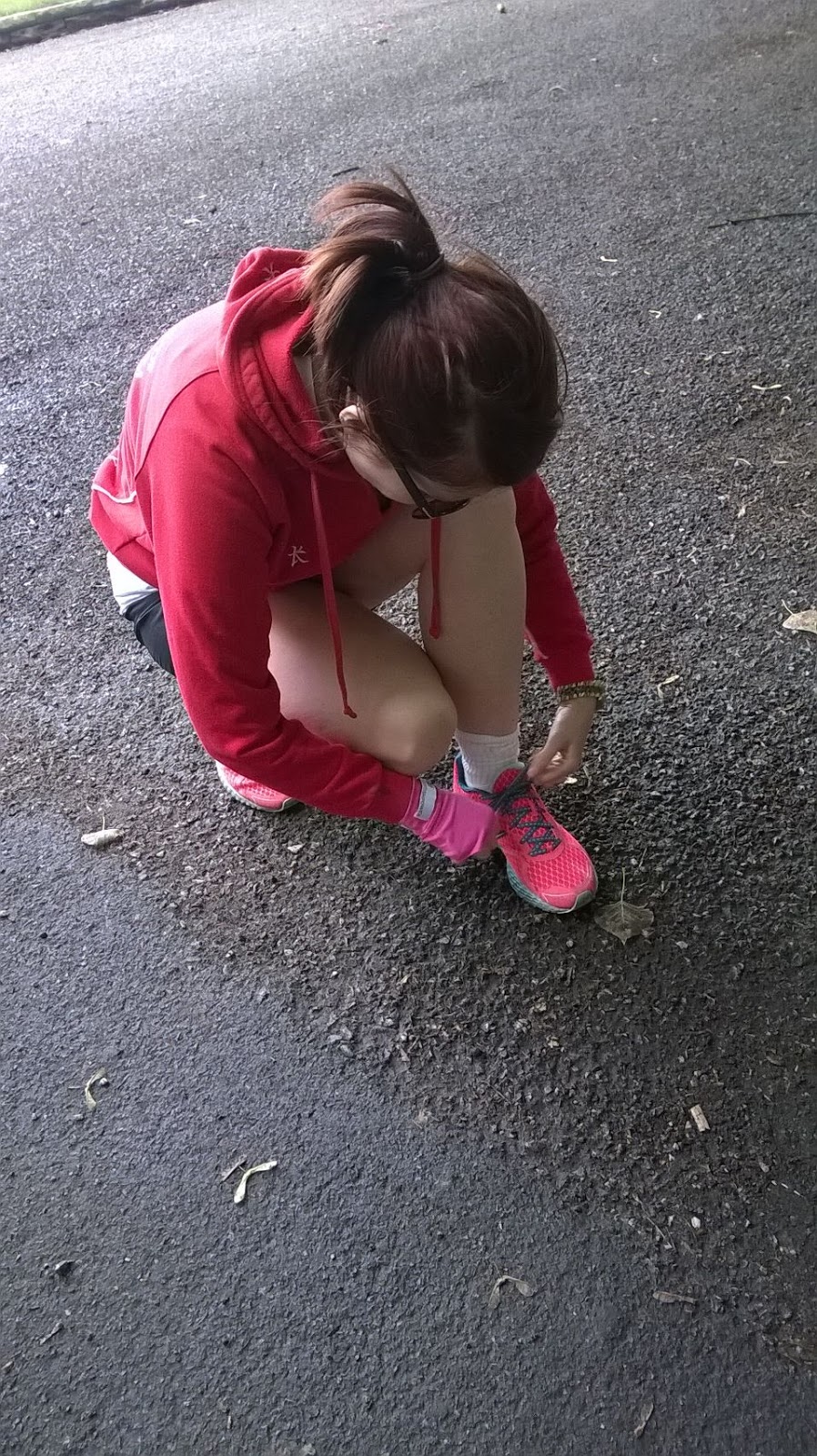 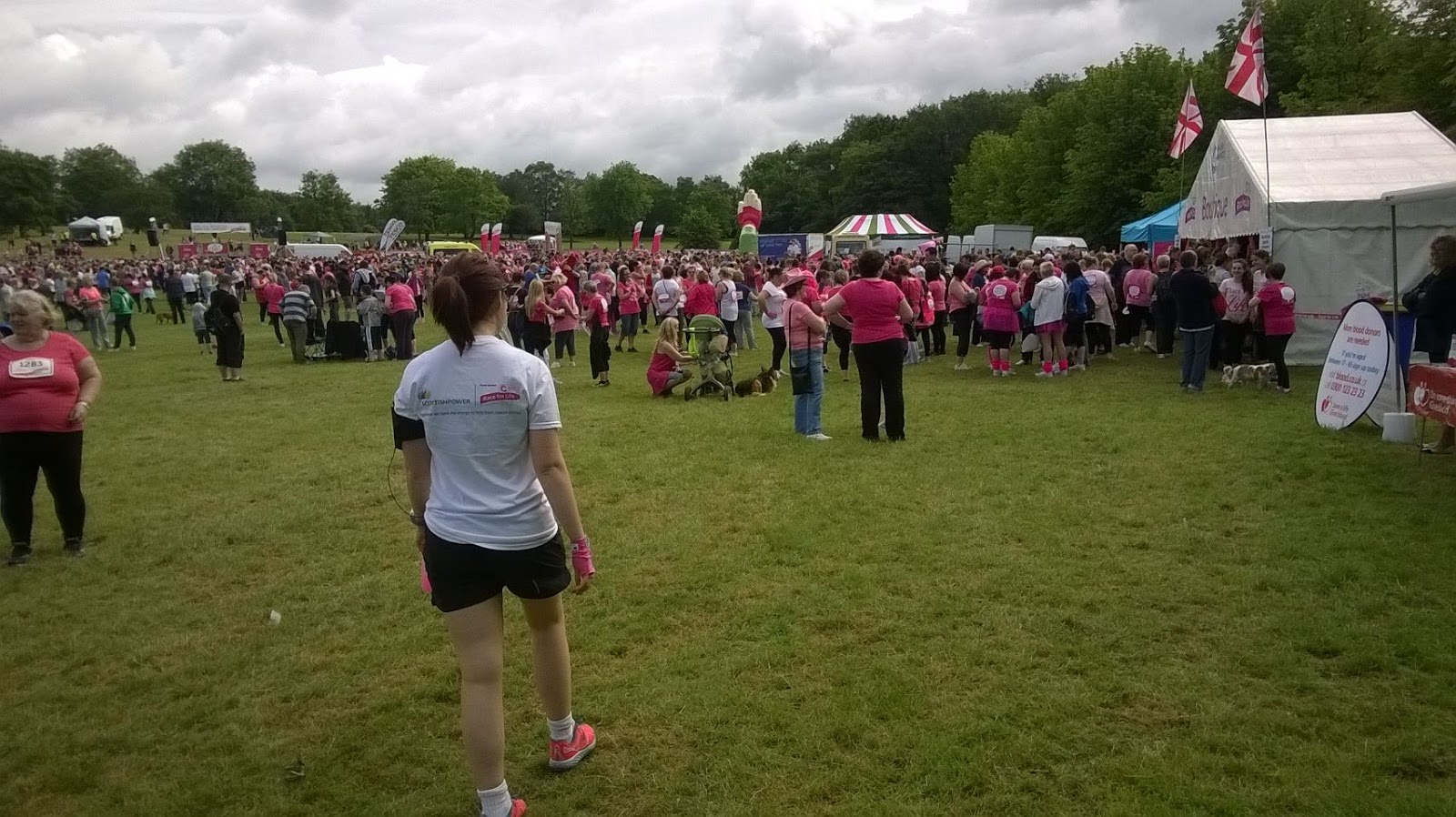 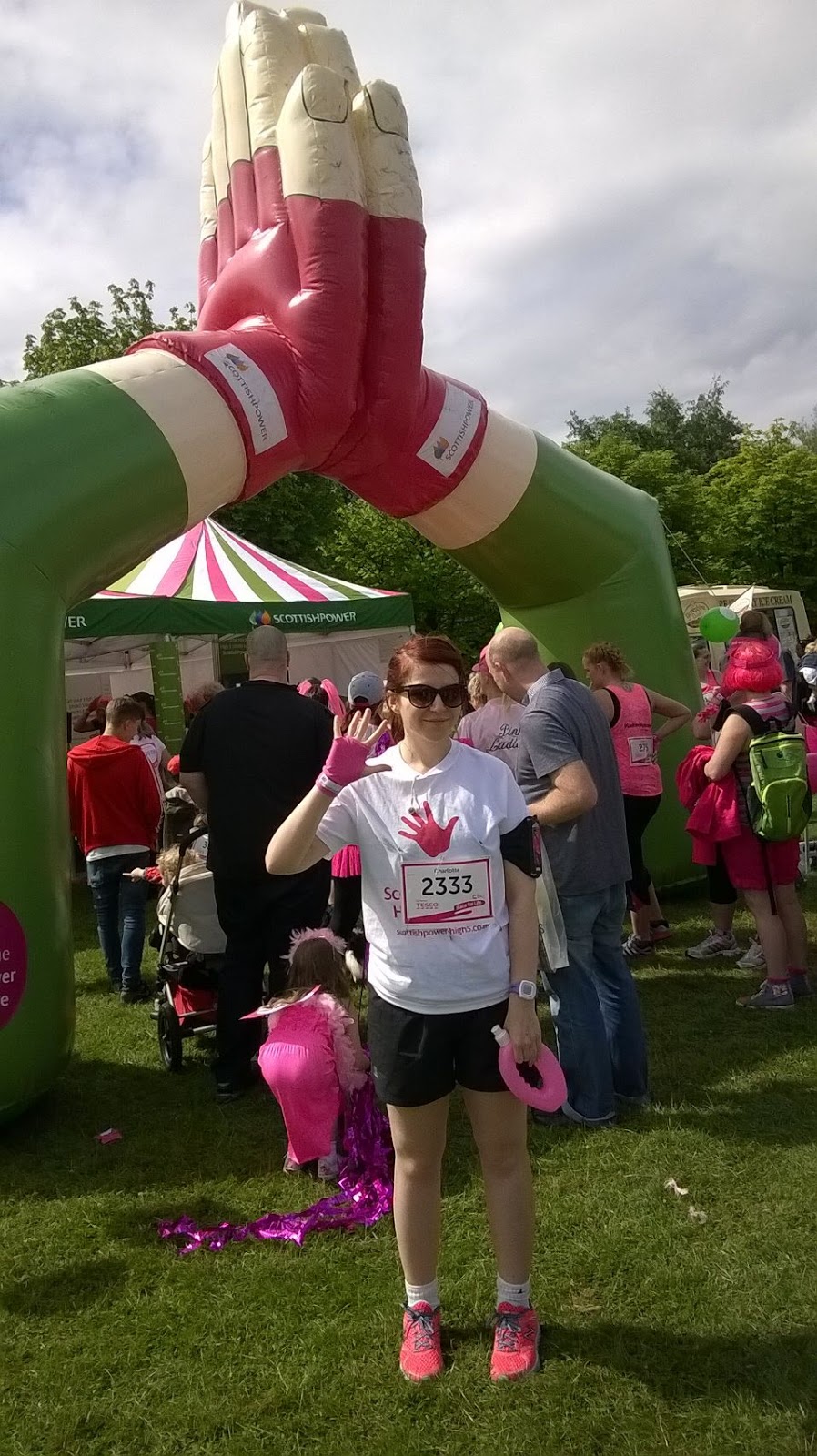 Representing the Scottish Power High 5 Wave
With Race for Life, you have the option to run, jog or walk the race, so I signed up with the runners. As we lined up, I set my Garmin to find my location, only to find that it wouldn't start. This ended up being incredibly freeing and allowed me to enjoy running, instead of staring at my pace all the time. 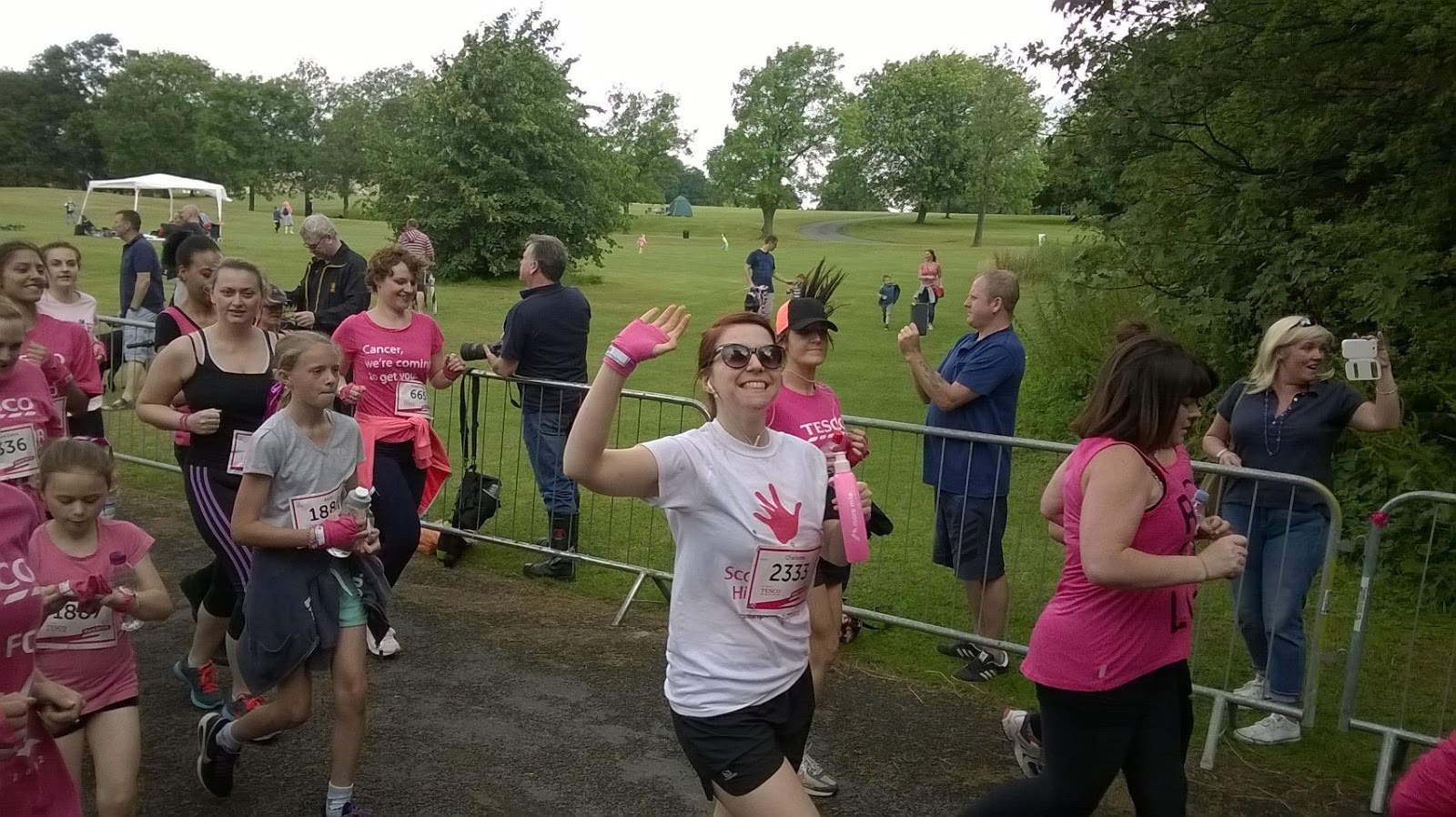 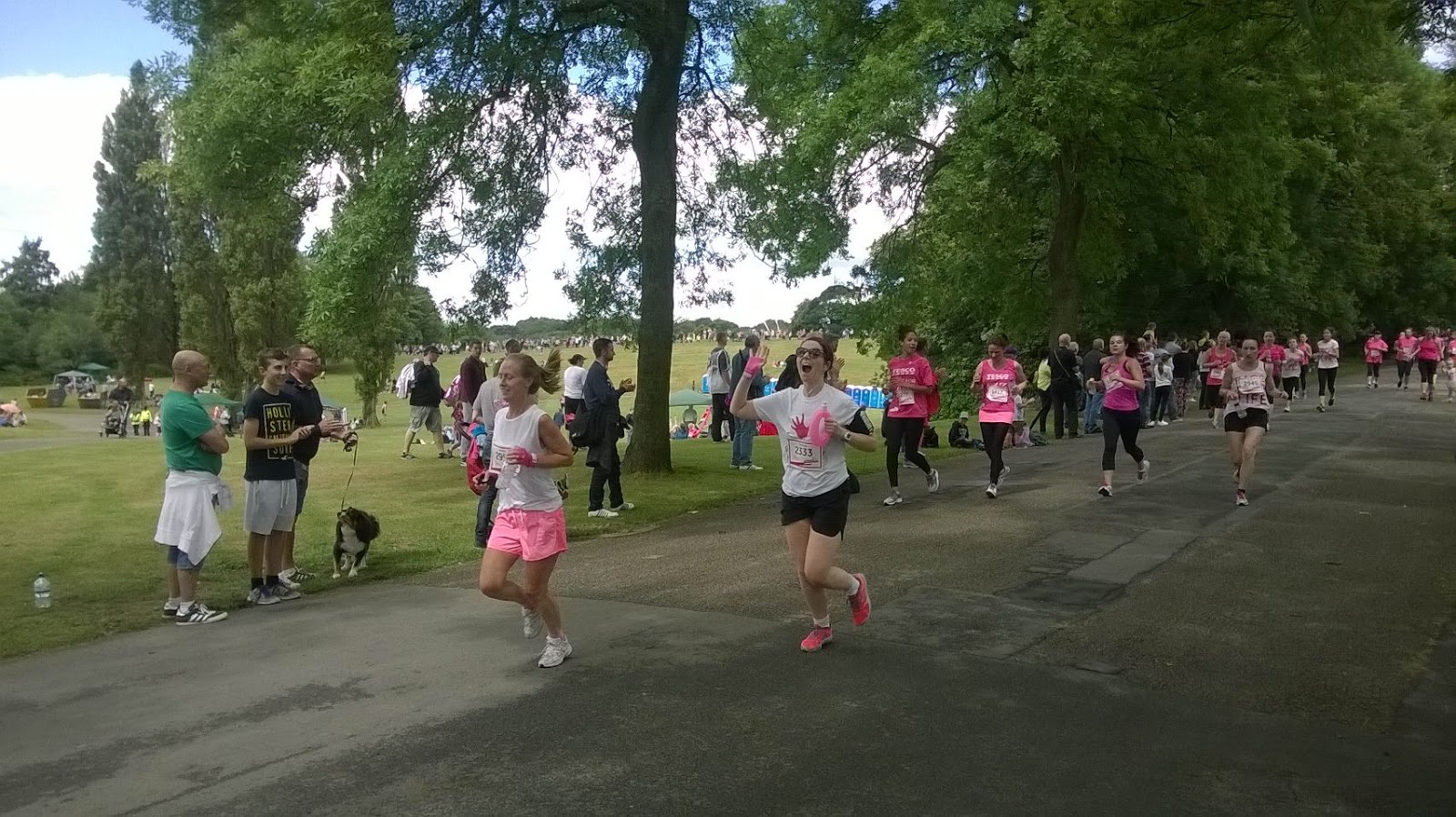 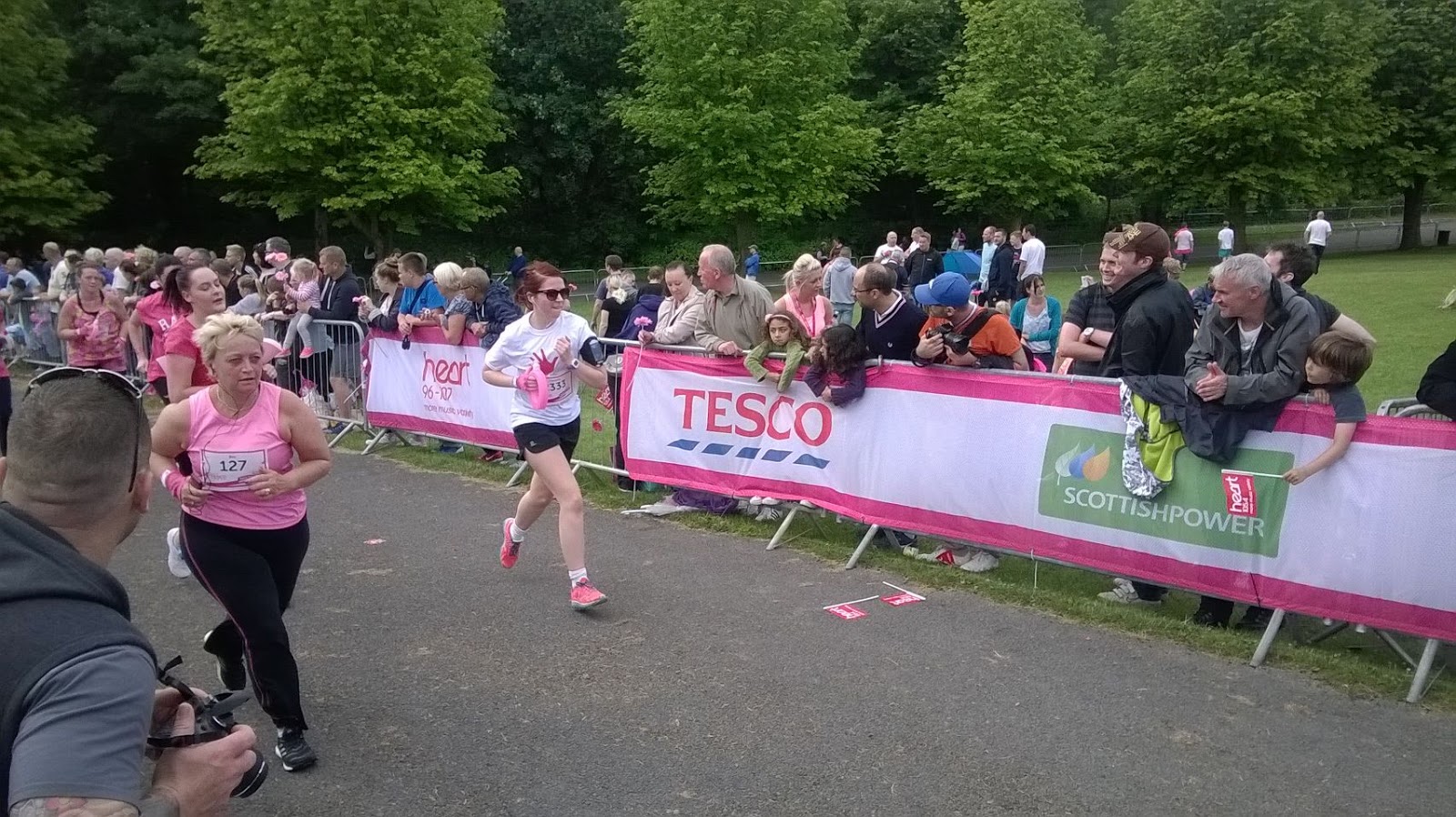 Now just for the record, this isn't a race you're going to get a PB for. A lot of the people in front of me decided to walk and as many people were in groups, you did a lot of weaving around and over taking. It's also a pretty hilly course (my second 10K was here and you might remember that it was not fun!) but it's not timed. You don't get a chip and as my Garmin didn't work I don't know my time except for the time at the which only counts from the gun, not from your time crossing the start line. It certainly wasn't my best and I think I came in at about 38 minutes. But it wasn't what the race was about. It was about raising money, raising awareness and doing something in memory of people we have lost. And for a lot of people, it was about walking, jogging or running their first ever 5K. I remember how excited I was when I completed mine!
It was a really, truly humbling experience and I'm so glad Scottish Power asked me to take part. I know it was worth it for that £250 for Cancer Research, which I know will be put to good use. 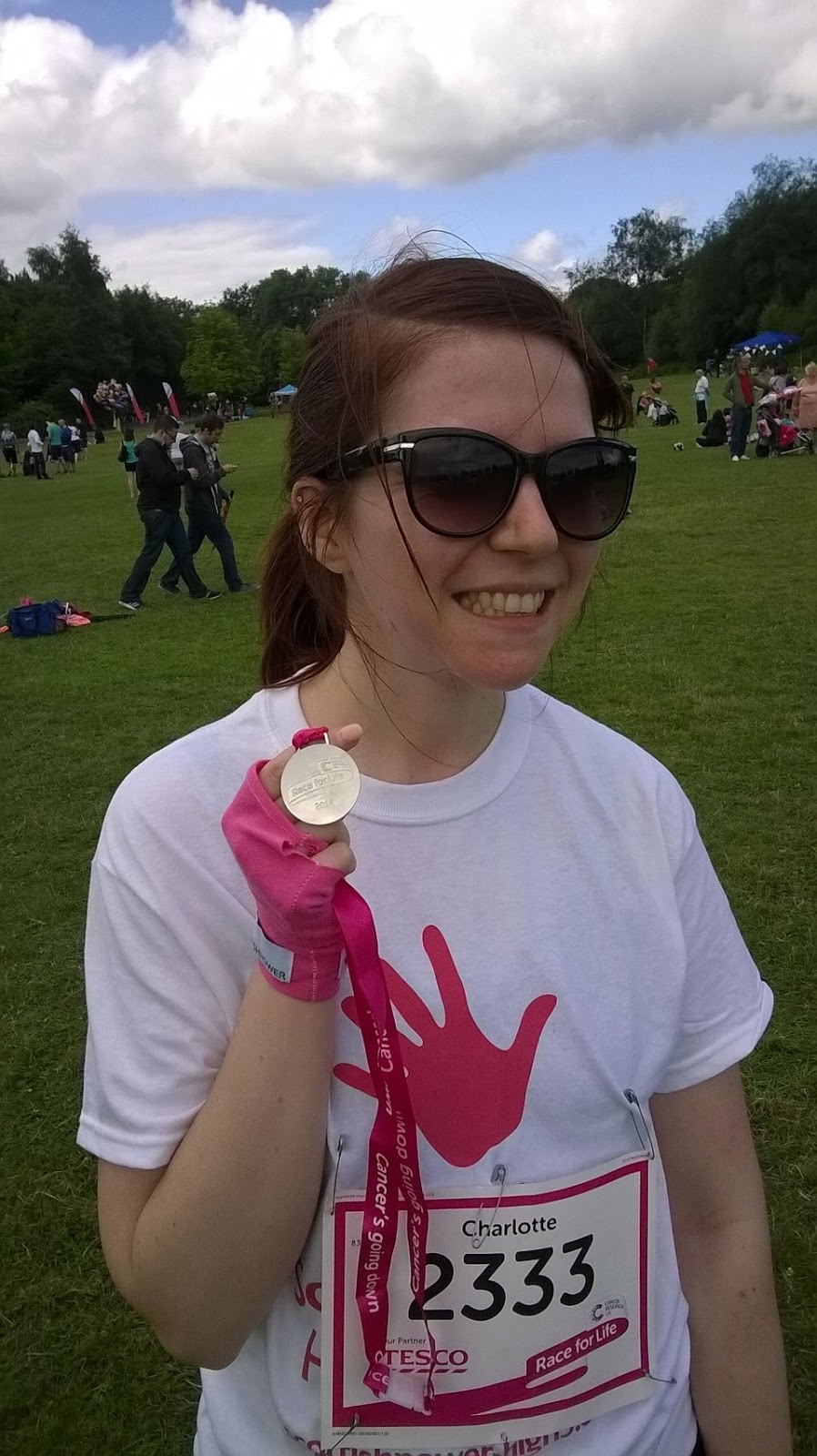 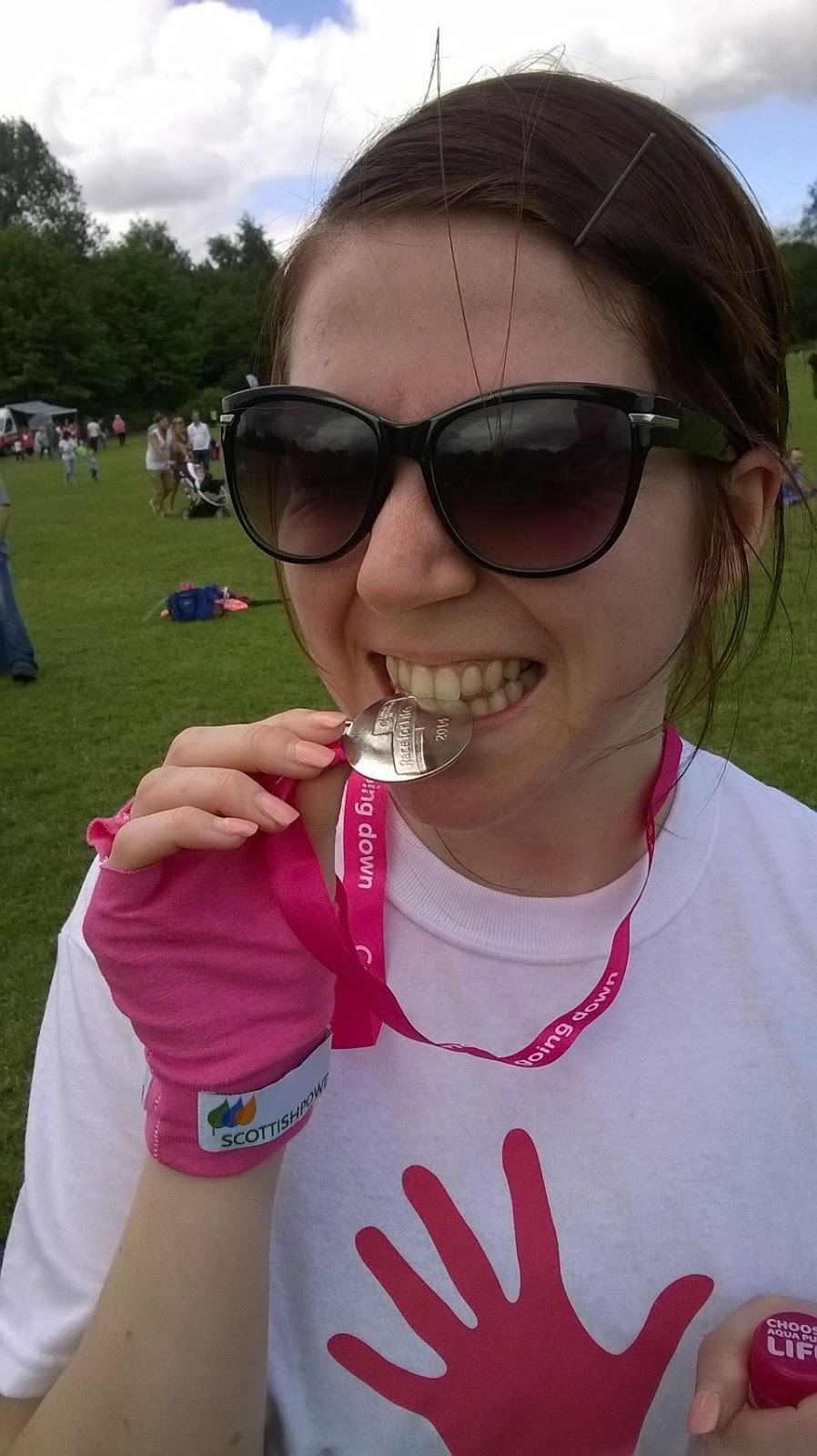 Thanks Scottish Power and thanks for having me, Race for Life. Oh and also thank you to my lovely boyfriend Phil who took all these hilarious pictures of me, and for coming with me to the event. With over £500 raised from my half marathon for the Alzheimer's Society and £250 here for Cancer Research, I've raised over £750 this year for charity. And that is something to be proud of.
Labels: race race for life running scottish power workout