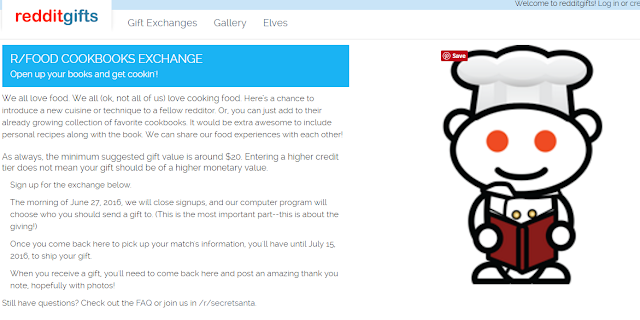 One of my biggest loves in life is surprises.

I love nothing more than planning the perfect present for someone and knowing they're going to love it. I get so excited about surprises sometimes that I ruin them because I'm just so excited. There is nothing in the world better than giving someone a surprise you'll know they'll love (I managed to make my Mum cry when I revealed I'd bought us a weekend away to Budapest as her present for her 60th). I also love to receive surprises. I want no clues, no hints. I just want surprise. Even if it's just that you got me a cookie. I love them.

So when my biggest loves in life are recipe books and surprises, it's no, ahem, surprise, that I was intrigued when my friend, Riven, told me about the Reddit Coookbook exchange that was happening last month. I instantly created a Reddit account and signed up.

The idea is that you fill in a profile about yourself - what you like, what you dislike, your favourite things to cook, and a link to your Amazon wishlist if you like. Then you get matched to your "santa" and someone gets matched to you. Then you go ahead and buy your santa something you think they'd love based on their profile.

They recommend a $20 budget (about £15) and you can choose if you wanted to be matched with someone in your country only or if you're happy to ship abroad.

Now I should have really pretty early on that I am a terrible person to get involved in something like this. I wrote an absolute essay in my profile. My likes, my dislikes, a list of recipe books I already owned. I realised even as I typed it that I was being way too prescriptive and that my biggest worry was getting something I already had. It was too much to list all the recipe books I owned, right? I added my Amazon wishlist and hoped they might get me something from that - I even added a few new ones.

I was matched quickly and was thrilled to find I'd been matched with a fellow veggie. And less thrilled to see their bio was short. I mean, basically, "I'm a vegetarian and I'm excited to try new recipes." Thankfully, I'd already had an idea of what I wanted to send my match regardless - Anna Jones' A Modern Way to Cook.

I have Amazon Prime, but I didn't want to look too keen, so I waited a few days before ordering the book for my santa. I wrote them a note, telling them which were my favourite recipes and recommending the sequel, and hoped they'd enjoy the book.

A few weeks of obsessively checking later, I started to get nervous that a) my giftee hadn't posted that they'd received their package and b) my gifter hadn't pulled my information for 2 weeks!

I started moving things around my Amazon wishlist, worrying that I was going to get something I already had, worrying more than my giftee's book which Amazon had told me had been "delivered to a neighbour" had gone missing. Honestly, I regretted getting involved in the whole thing!

The final day for posting came, and still nothing. No message from my gifter, no "thank you santa" from my giftee. Eventually I caved and messaged my giftee, panicked, asking if they had received the gift from "Tanya at number 20".

Thankfully, they got back to me right away and posted about how much they liked my book.

But I will still waiting for my book.

If you don't receive a gift, you can be "rematched" but this doesn't happen until a few weeks after the last day to ship. I was starting to wish at this point I'd just saved my money and just bought myself a book from my wishlist!

Eventually, finally, I got a message that my gift had shipped, and a few days later a message from my gifter, apologising for the delay.

And last week it arrived. A Hamlyn 200 Mexican dishes.

And it would be a lie to say I wasn't disappointed. My shelf is filled with beautiful, hard backed, wonderful recipe books - exactly what I'd sent my giftee - and instead I got a book I might have picked up in an Aldi. It also wasn't vegetarian - I had mentioned in my profile that I eat fish and was happy to receive a non-vegetarian book - but I was disappointed that I knew straight away I wouldn't be able to eat everything in the book.

Then the next day I came to my senses and had a proper look through the book, and it's actually really good. It's also, crucially, not a book I already had. Not something I would buy myself, but isn't that the point? I've filled two post-it notes with recipes I want to cook, which is usually a good sign.

Would I do an exchange again? Yes, but not for recipe books. I already have way too many and had to be way too prescriptive in my profile, which just stopped it from being fun. But in the end I got a new book, and I hopefully bought someone a book they will enjoy, so I'm glad I got involved. Now to arrange a Mexican feast!
Labels: cookbooks food