I remember years ago - who knows how many years ago - walking past the park near my parents' house and seeing them. Alien to me then. Hundreds of them. Florescent. Bright eyed. What overachievers, I thought, standing in the rain waiting to trudge through the mud for pleasure. Crazy.

I don't know when I first really heard about parkrun. I don't remember learning about it. All I remember is that it became a goal. All I wanted to do when I first started running was to complete that 5K course. 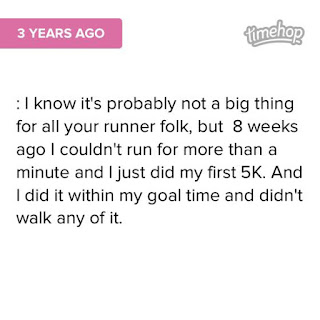 parkrun became my family. I would go every week - never speaking to anyone - but I would see the same faces every week, recognise the same people around me, feeling part of something bigger. We all went every week with this shared goal. It wasn't competition, at least, not with the people around us. It was about being better than you were last week. That was all that mattered.

And sometimes you were. In fact, for my first month or two it was PB after PB. So it was hard when they eventually dried up. It was hard being near the back, sometimes getting lapped. But it was habit, it was routine, it was discipline. It was every Saturday morning I could.

parkrun is my fit test. It's my one run per week when I push myself to my limits. And it's hard! I've run a marathon and I'm still exhausted when I cross that finish line every Saturday.

It's community, it's family.

I will do anything to avoid missing a parkrun, whether it's leaving a night out early on a Friday night or finding one nearby if I'm away for the weekend. If I'm injured, I'll volunteer.

This week marks 3 years since my first parkrun. I received my 50 runs tshirt in February and I'm currently on 66 runs. I'm on a great streak at the moment - I've only missed two runs in the last 12 weeks.

parkrun is part of my life now. Part of our routine. It's what we do on a Saturday morning before the food shop. The best way to start a weekend. Phil started joining me a few years ago and he's working towards his 50 at the moment. It's something we do every single week. I joke about parkrun for my future hen party. I talk about bringing my future kids. When Phil and I look at areas to move to, we always ask "which parkrun would we go to?"

parkrun is home. See you at 9am.