My friend Sophie did a brilliant post last week called "Tried and tested online recipes using storecupboard essentials" and I absolutely loved that idea so asked her if it would be okay if I copied her!
I am always reluctant to post too much of what I cook on the blog because I'm very aware that most of what I cook is from recipe books and in a lot of cases the recipes aren't available online, and I know how frustrating it is to find a recipe you really want to cook, only to find you don't own the book and can't make it!

So over the course of the last 2 weeks I started to make a note of all the recipes I had made that were available online, and it turns out there actually are quite a few! I have a lot of favourites which I turn to regularly online, and I'm always saving recipes from Bon Appetit or The Kitchn to come back to.

I think particularly at the moment I have been turning to the internet a lot for recipes using my storecupboard staples, rather than looking through my hundreds of books for inspiration. Instead I've been saving recipes that involve the ingredients I usually have in - always great to find a recipe you love the sound of and to find out you already have everything in!

I've decided to stick to recipes I've made in the last few weeks rather than looking back on all the thousands of meals I've made from recipes on the internet, but I'd love to keep this going as a regular feature.

So, here's what I've made over the last few weeks from online recipes, and links so you can make them too!


The Stew (aka, Spiced chickpea stew with coconut and turmeric) 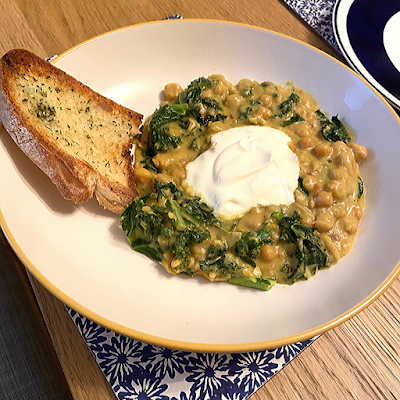 If you've been on food twitter/veggie and vegan twitter/pop culture twitter for long enough, you've probably heard of The Stew. Yes this stew is so famous it needs no name.

I've been wanting to make this for ages, particularly as it is a) right up my street, b) made up of ingredients I always, always have in (chickpeas, coconut milk, some kind of greens) and c) famous!

(This is a really interesting article on how it's become so popular).

And of course, with popularity comes backlash so I'd seen a lot of posts around "is the stew really even that good?" but the positive of these is that most of them came with recommendations for tips or tweaks or adaptations, which I really appreciate.

Verdict? It really is great. It's easy, it's fairly quick, it's made up of storecupboard essentials, it's tasty and it's vegan.

Recipe here, but I also enjoyed this video on how to make it, too. 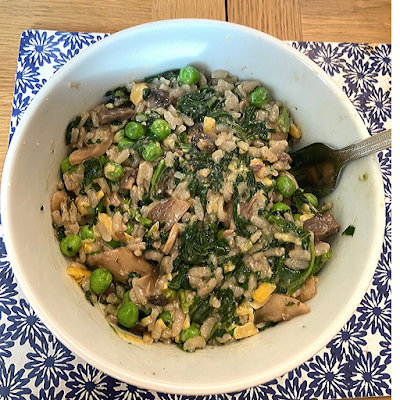 This is a storecupboard recipe I absolutely love for using up random bits of veg in the fridge. Making risotto is so so so easy in the Instant Pot. You literally throw everything in, leave it for a bit and hey presto, risotto.

I used mushrooms, peas and frozen spinach for this, and topped it with normal cheese as we didn't have any parmesan. It's ridiculously easy and delicious - I've made this so many times! 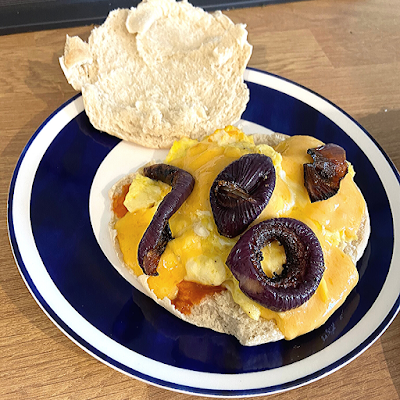 Weekend brunch is kind of a big deal in our house. Saturday mornings are for parkrun (or at the moment "not-parkrun", which is the 5K loop we've developed in our local park which we go to every Saturday morning at 9am in our parkrun tshirts and pretend is parkrun), and Sundays are for a long run or Military Fitness.

By the time we've got back from these activities we're hungry, and unlike every other meal of the week, this is not one we plan. It's nearly always eggs, sometimes Nigella's strapatsada, Nigella's Mexican eggs (we like Nigella okay), some kind of shakshuka or avocado and eggs on toast. I'm always looking for something easy, quick and delicious for a weekend morning.

As soon as I saw this recipe I knew we were onto a winner. I had pretty everything in already and I knew this would be delicious in a pitta.

We didn't have any fresh herbs so I skipped the "sauce" and just smothered it in Frank's Red Hot sauce. This was so tasty and quick and easy I'm already planning to make it again at the weekend. 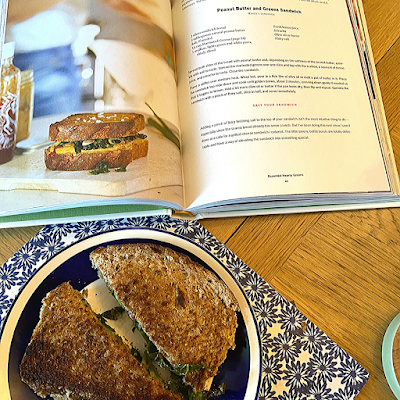 I can already tell about 50% of people are completly turned off by that title and the other 50%, like me, are all TELL ME MORE, TELL ME MORE.

This is insanely delicious.

So I mentioned in my last post that I recently bought Lukas Volger's Start Simple and I've been cooking from it over the last few weeks. It actually took a few weeks to arrive given the current climate, so I was hunting online for recipes I could try first, and this just absolutely caught my imagination.

I had a big bunch of spring greens (my fave greens) so I made the marinated greens first (you have some left over after the sandwhich which is great because they made a brill side dish to almost anything) and a couple of days later I made the sandwich.

It's basically exactly what it says on the tin - hot melty peanut butter (urghhhhhh), fresh crunchy greens, a squirt of sriracha and, for me the pièce de résistance, tangy spring onions, between some good toast and grilled on both sides in a pan. It's absolutely dreamy if you love peanutty, spicy satay flavours.

I already cannot wait to make this again.

PS. Spring onions aren't something I always have in, but I recently found out you can grow them back from scraps so I'm doing that at the moment. Might be worth a try if you like spring onions! 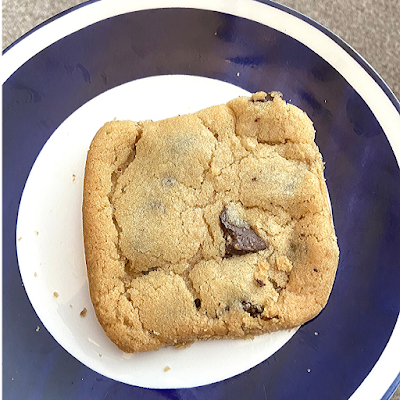 Loads of companies are posting their industry secret recipes at the moment which I think is absolutely brilliant! Pret is one of those places I think everyone misses at the moment, and they're doing some really great content on Facebook, as well as sharing their recipes.

As soon as I saw the recipe for these big cookies I knew I wanted to make them, and I had everything in (thanks to a bar of chocolate I got for free and really hated which has been sat in the cupboard for months!).

These are so tasty, but they spread like crazy and are enormous! We got 10 giant cookies from one batch. Definitely a good use of any Easter chocolate you might have lying around. 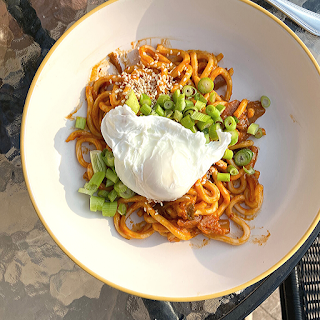 Okay, bear with me here. I know kimchi and gochujang aren't in everyone's storecupboard, but I also know a lot of cooks like me who bought an enormous tub of gochujang for one recipe 6 months ago (thank you Meera Sodha's East) which has been sat in the fridge ever since, and also saw kimchi in Sainsburys once and went "ooh, kimchi!", which has also been sat in the cupboard ever since.

Oh and the udon noodles were a "middle aisle" purchase in Aldi a few weeks ago.

So maybe not quite a pantry staple recipe for everyone, but it was for me!

This recipe has been on my list for ages, thanks to comments like "my favourite recipe in the whole world" and "this has all the right flavours".

I skipped the raw egg cause it freaked me out a bit too much, and we had poached instead, so an extra pan was needed. But this was super easy and really quick. I liked this but Phil really loved it. If I could get hold of udon noodles again I'd consider making it again (I have half a jar of kimchi open in my fridge now!), but it didn't blow me away. 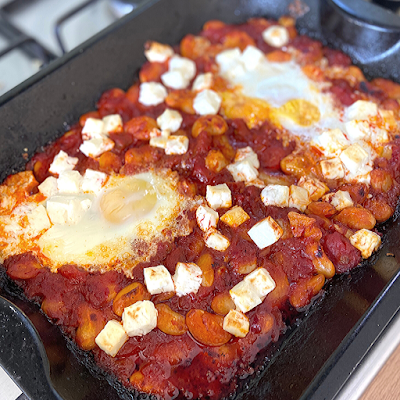 Here is a short list of things I love:

This was always going to be a hit - especially as it contained beans AND was cooked entirely in the oven so I could drink iced coffee in the garden while it was cooking after parkrun.

I absolutely love rose harissa and again, had a jar open in the fridge (mostly so I can make one of my favourite recipes, Ottolenghi's pasta with harissa, olives and capers) so I had everything in for this recipe too. I halved it for just two of us.

This was so so so delicious with some bread for mopping. Another one to go on my brunch rotation list! 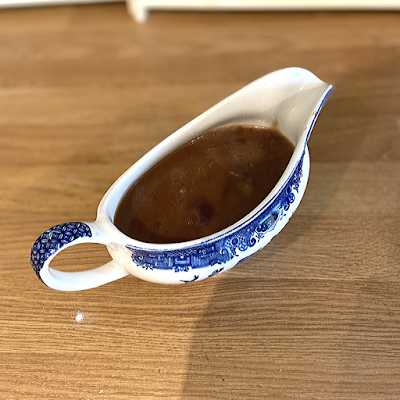 Nope, not Anna Jones (or at least I don't think so!). Just, Anna. I've been using this recipe for years because it's just so so so delicious. I made the serving for 4 for the two of us and it's just gorgeous. We had it at the weekend with mash potato, peas and veggie sausages and it really makes it a meal (rather than my onion-gravy-granules gravy I usually make...). 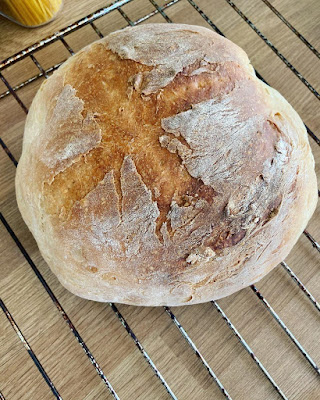 Yes, I have a sourdough starter. Are you realy surprised? This is such a "me" thing to do. Let me tell you, it's a bit of a pain in the arse to be honest. Do I regret doing it? No. Am I glad it's over? Yes. Mine took two weeks and lots of moving it around, changing flour, feeling like it was literally never going to be active. Reading hundreds of articles which all seemed to have contradictory advice. Dealing with Phil saying "your normal bread is really nice though, are you sure this is worth it?".

But I did it. And when I brought out of the oven my first little sourdough baby I was so proud.

I used this recipe for my loaf which turned out perfectly. I deffo recomend picking one recipe and sticking to it as there is so much advice out there. And I used this recipe for my starter, though I eventually moved to 50g flour/50g water feed every day, and then started using strong bread flour rather than all purpose flour towards the end which helped it to get active.

Will I make sourdough again? Yes, probably. Do you want my recipe for no-knead crusty bread which only takes 3 hours from start to finish and is almost as good? Of course you do.

At the moment I'm cooking mostly from Start Simple and Tin Can Magic as I'm hoping to review them on the blog soon, but I'll keep a list going of anything I cook where the recipe is available online so hopefully I can make this a regular feature.

Have a good week!