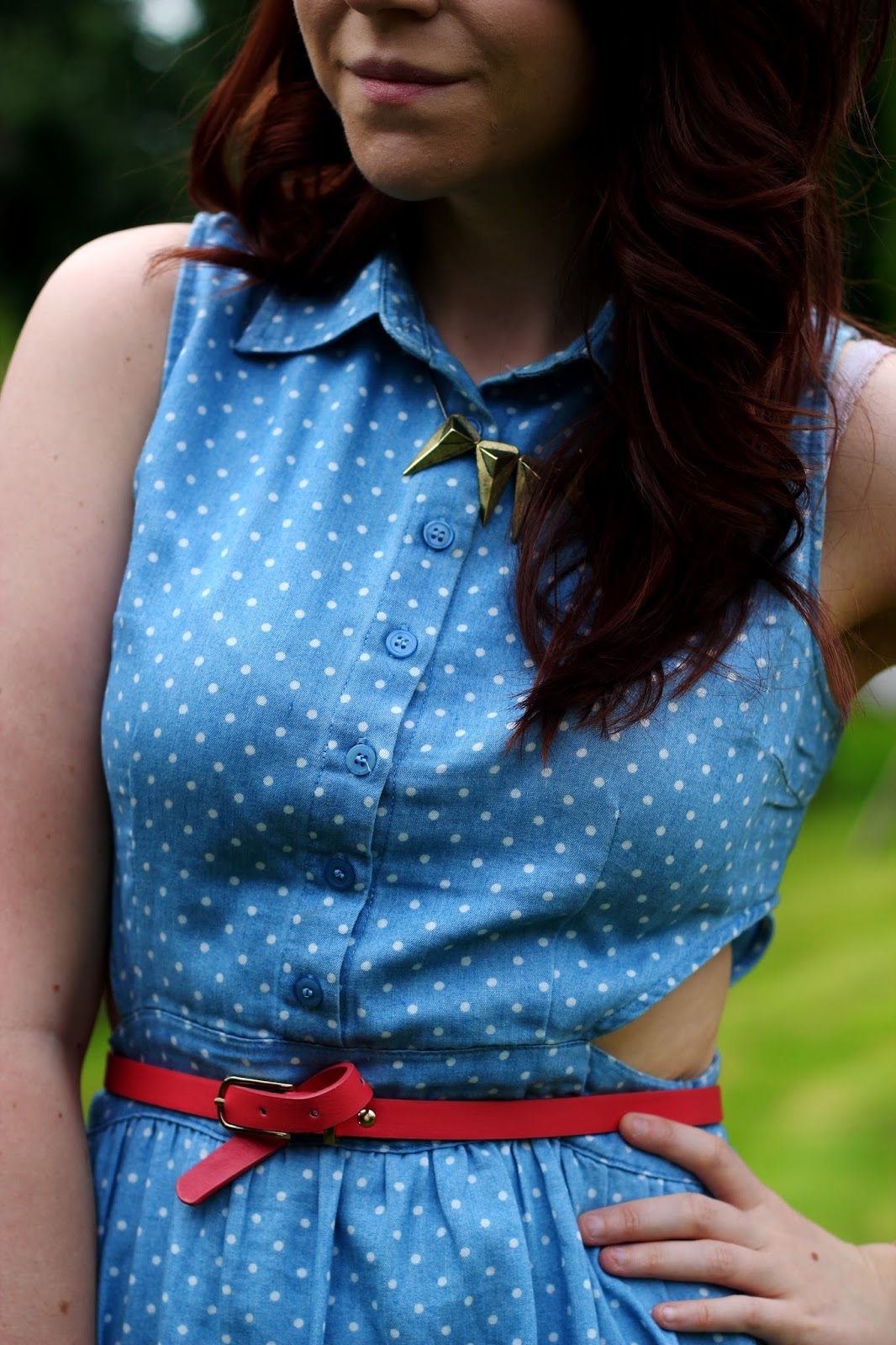 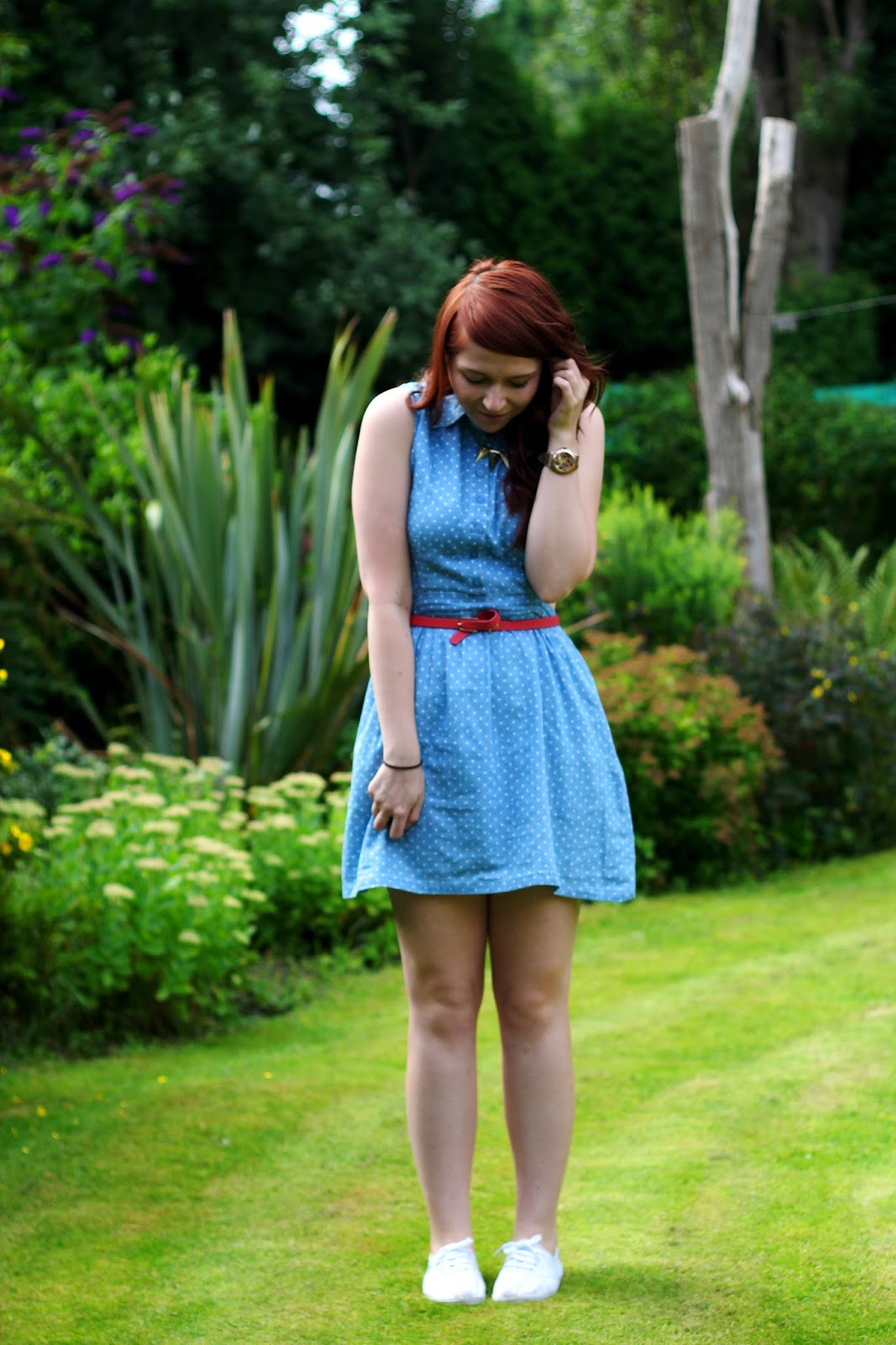 I'm calling this my Summer Finn dress. I almost never wear blue, but the minute I put this on I was reminded of all the blue outfits in (500) Days of Summer (which were apparently to match Zooey Deschanel's blue eyes) and instantly decided I really should wear more blue. As a fellow blue-eyed brunette (although unfortunately, I think the similarities end there). Anyway, I love this dress. So much so that when I took these photos it was the third day of wearing it (sorry not sorry). I'd been after a blue polka dot dress for ages and initially dismissed this for its cut-out sides (eek!). I purchased one from Forever 21 and one from She Inside by oh my god, they were both SO SHORT. Like, indecently short. Are hemlimes getting shorter or am I getting old, seriously? So because I have ASOS Premier (both a blessing and a curse I tell you- I've got a new skirt coming to work tomorrow I ordered this morning), I decided to give this Primark one a go, cut out sides or no cut out sides. It turns out they don't really bother me, and are nice for an extra bit of cool on a hot day. I wore this to travel home from Berlin but with black tights, red flats and a red cardigan, but for this outfit I kept it simple with white pumps. It felt very Summer Finn (maybe the scene when they first go to IKEA?), who let's face it, might be a bitch but she has amazing style (GO TEAM TOM). 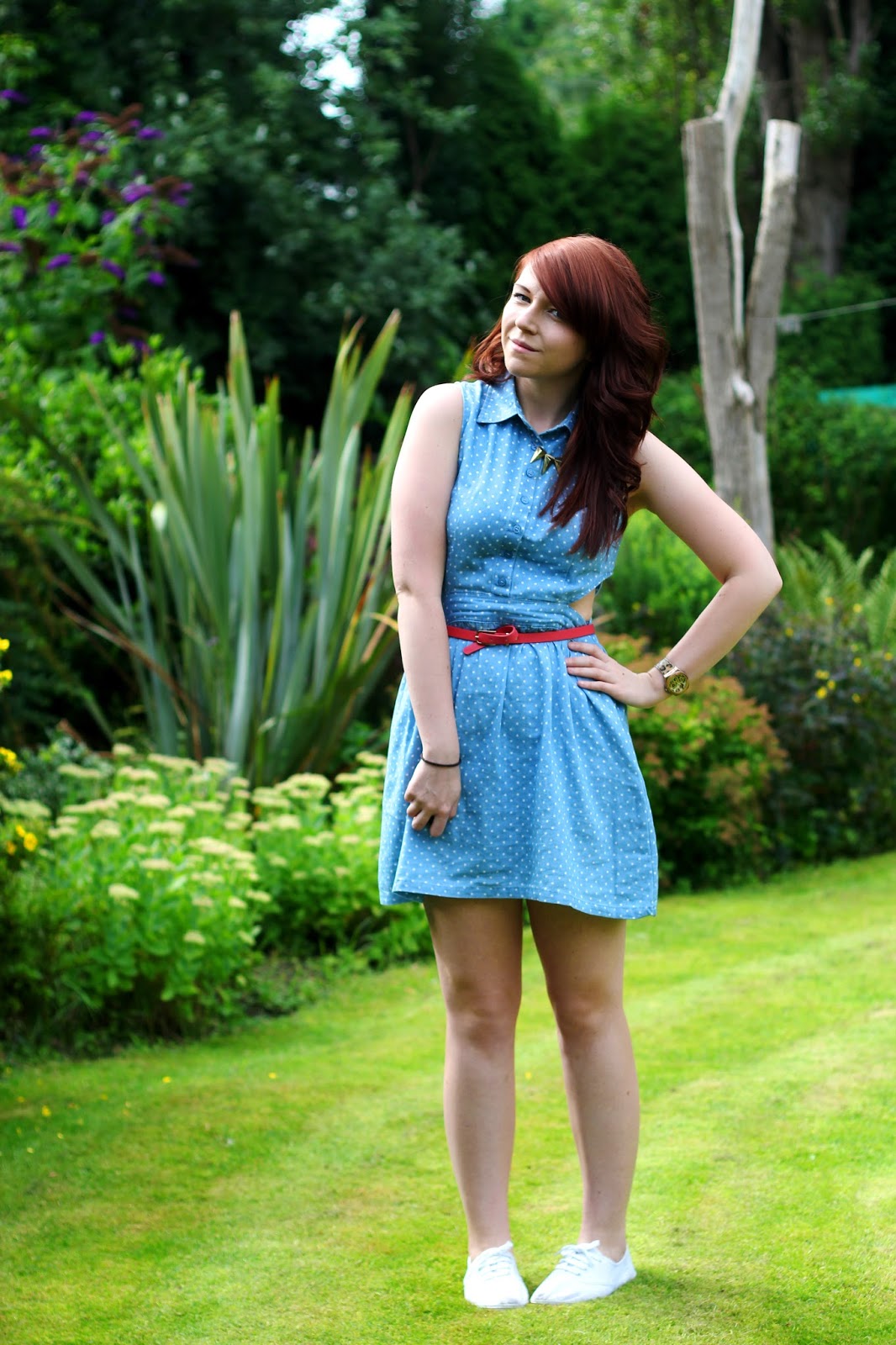 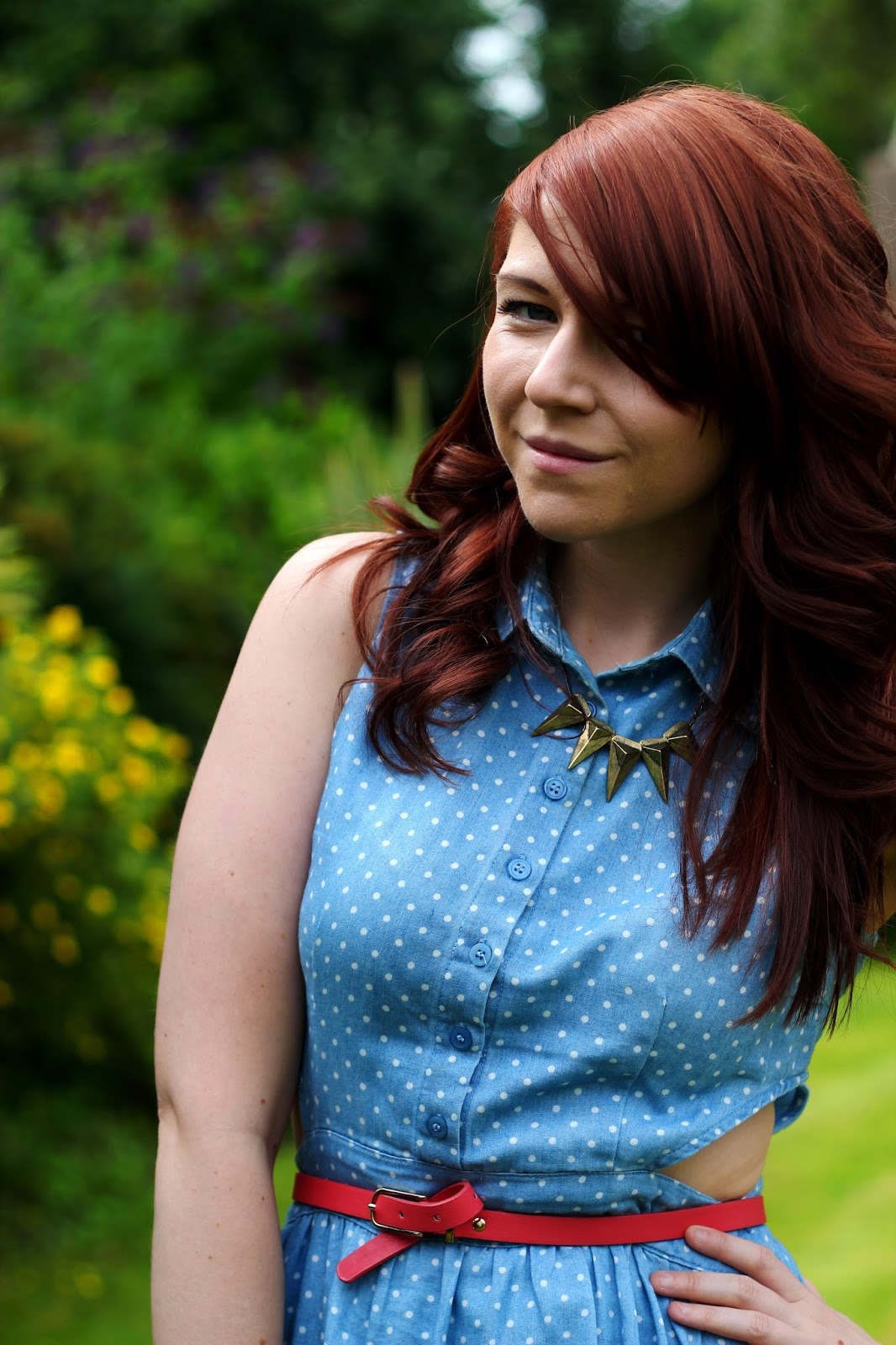 These photos are from Tuesday when I took a day off work to relax after holiday but ended up spending almost the whole day sorting out my phone. I won't bore you with the details but it's all fine now. I've had a pretty long week. I went back to work Wednesday, only to be ill Wednesday night, so I had to take Thursday off work sick, which felt even more rubbish considering I'd only been in one day! I've spent most of the last few days getting over being sick, but thankfully I'm much better now! On Saturday my Dad took us to the cinema to see Alan Partridge (it's hilarious, go see it!), and then out for an amazing dinner at Alberts (the aubergine and chestnut tagine was to die for). Yesterday we did our usual food shopping lark, and then went to see our family friends in Leeds. We had a lovely dinner and the best cheesecake I've ever had, and played on the Wii til midnight. And it's Bank Holiday Monday! Ours has been pretty relaxing. I've just finished my book (Mysterious Skin By Scott Heim. I highly recommend it), watched Breaking Bad (I can't even) and cooked a tagine for in the week (sadly, not as good as the one at Alberts). It's gonna be an early night tonight so I can get back into my 5am running routine. I had a few days off before I went to Berlin and was planning to get back into it before I was sick on Thursday, so I've had over a week and a half off. I did a (very) gentle two miles yesterday but it was absolutely awful after being sick and I had no energy at all. I'm going to go back to two mile runs this week and ease back into three and do Parkrun on Saturday, especially as I'm on holiday for the next two Saturdays. I was hoping to start increasing my distance towards my 10K this week but I think I'll give myself another week to recover! 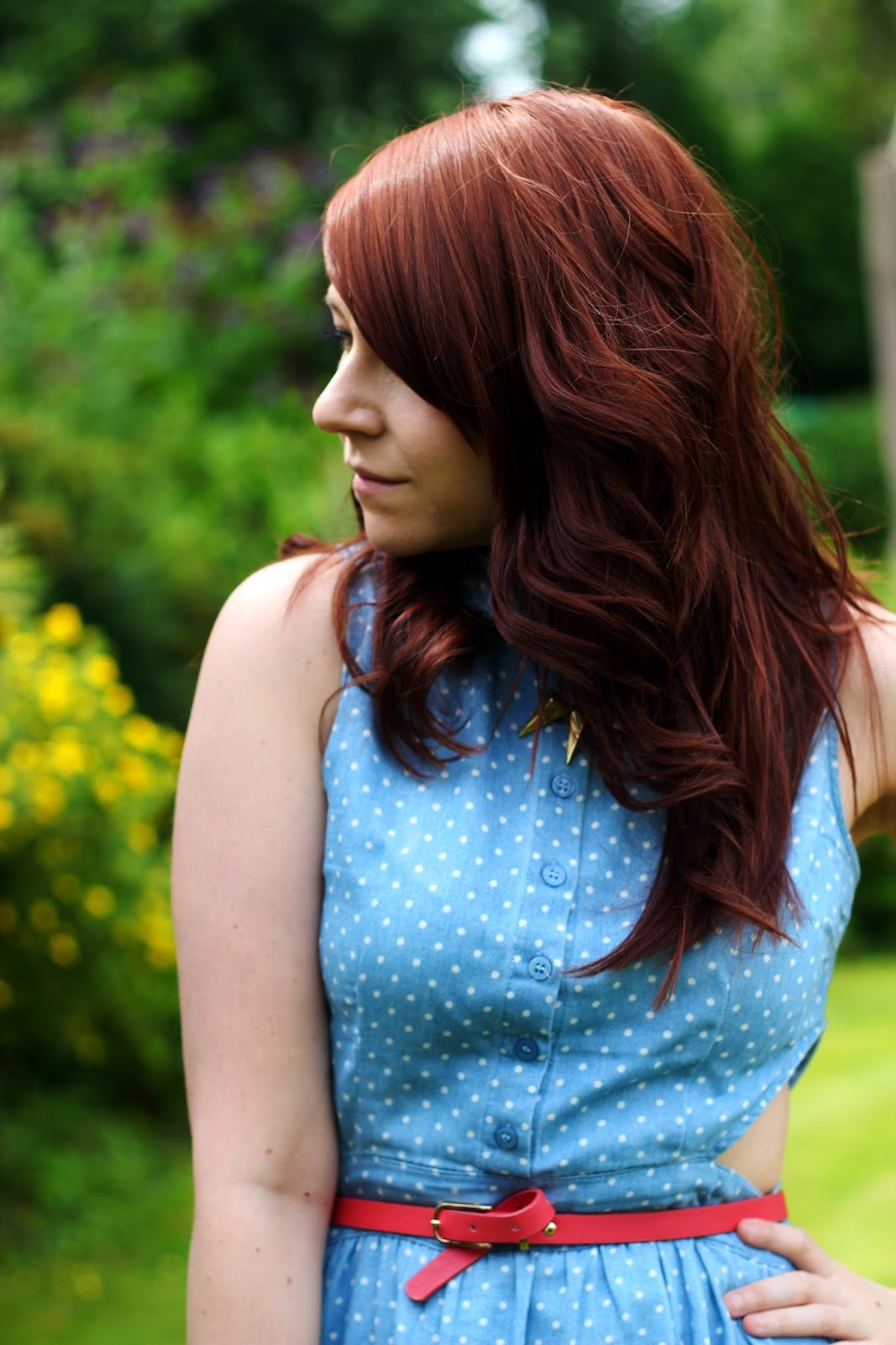 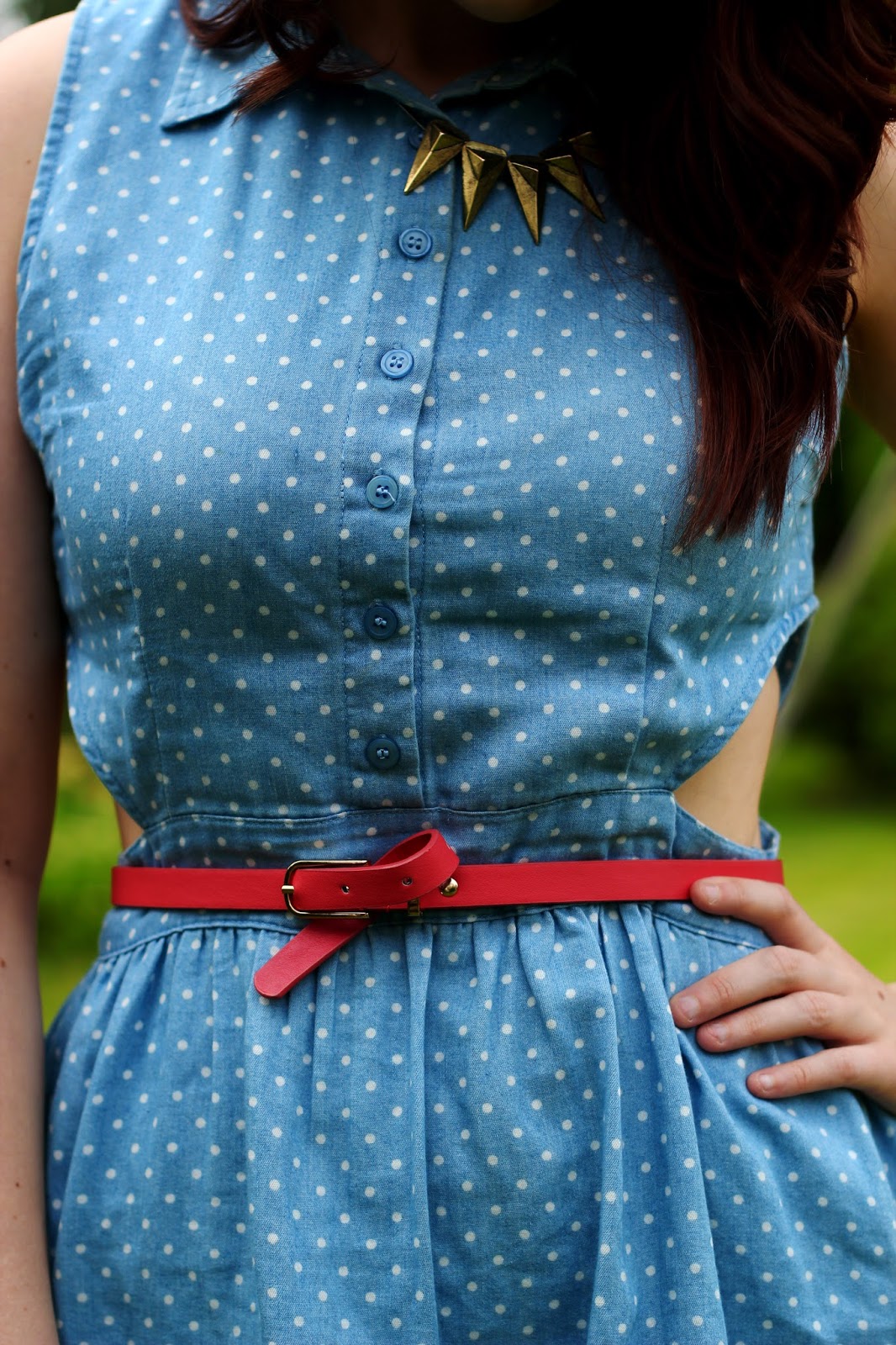 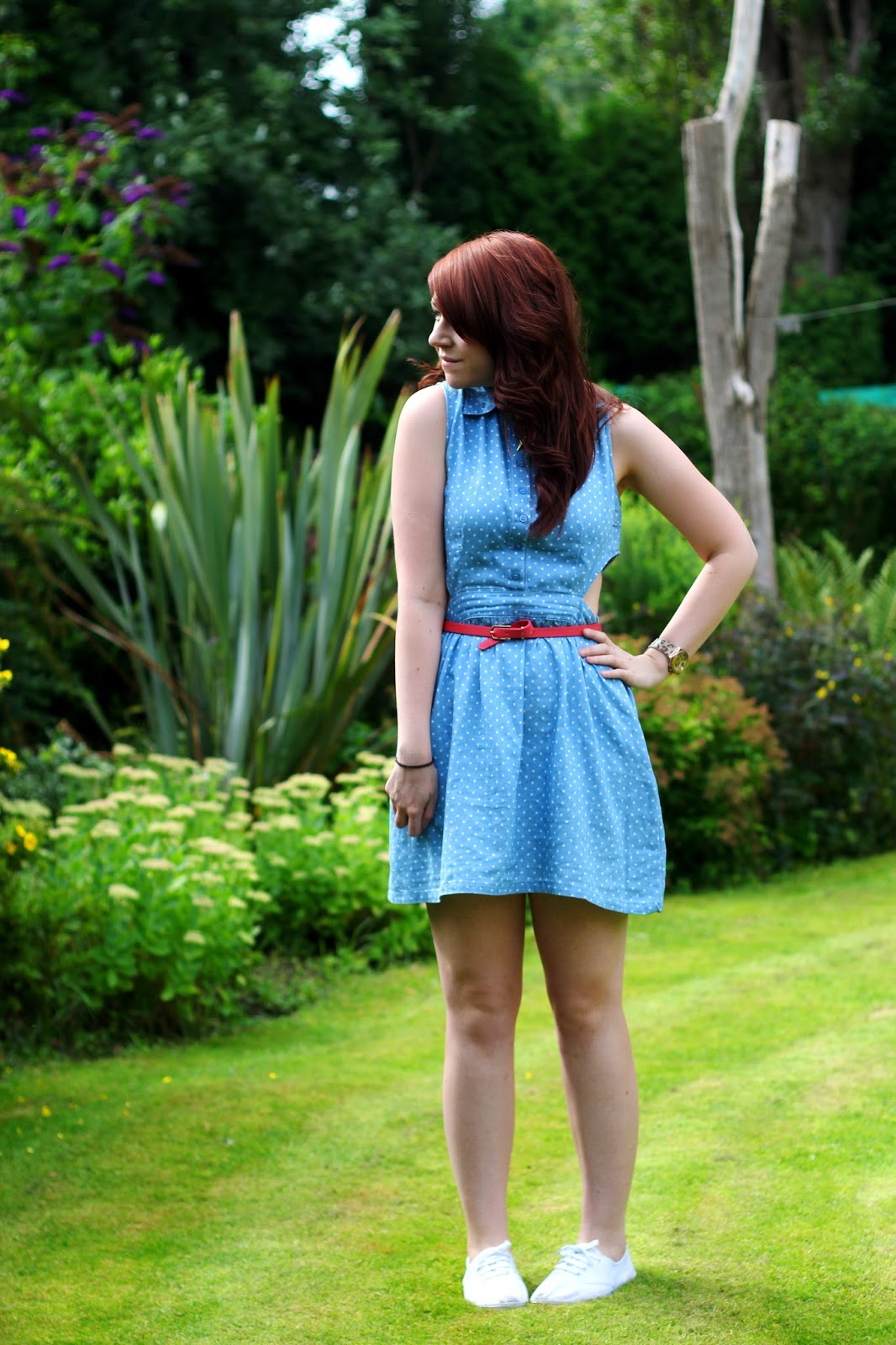 I can already feel myself starting to get sucked into the "oooh it's nearly autumn!" thing, so I'm gonna try to get a few more summery outfits up before I fully embrace the autumn. Plus I feel like summer has gone in the blink of an eye! I go to Spain a week on Friday for a week and when we get back in mid-September I feel like that will be the end of summer. Thankfully I've already ordered a tartan pencil skirt and a new pair of winter boots haha. Bloggers love autumn, dontcha know? Shame I really don't like Pumpkin Spice Lattes...
Anyway, I hope you've had a lovely bank holiday weekend. Back to the grind tomorrow, urgh!