A few weeks ago I received an email - "How fab can you look for £50?". I love a challenge like this, especially because at my core I'm actually really tight. Everything I buy is umm-ed and ahh-ed over profusely, I shop almost exclusively in Aldi and I get very upset if we run out of milk and have to buy it from the Spar next door (it's 50p more expensive!).

But while I love a bargain, ThinkMoney's challenge was to create a whole outfit for £50, which is no mean feat. I was given £50 worth of Love2Shop vouchers, which I could use at a variety of high street stores, but only instore and not online, and don't include my usual bargain meccas of Primark and H&M. I was going to have to really think about this.

It's once in a blue moon that I actually purchase clothes from physical shops, and even less frequently that I do so without consulting the website first. These days I'm not much of an impulse buyer. Most of my shopping is planned ahead from gaps I perceive in my wardrobe - spending hours browsing online or consulting Shopstyle. I can't remember the last time I just bought something without thinking ahead!

As it happened, I was going home last Saturday because my Mum was going to dye my hair for me (don't worry if you can't see any difference, that was completely the point) and she fancied a look around the shops first, so at the last minute before leaving the flat I grabbed the vouchers. I'm so glad I did.

It took me less than ten minutes in Debenhams to fall in love with this skirt. It was £20 in the sale, but I'm being extra-careful with money this month after having a little breakdown at the end of May (and as I said, I'm good with money!) so I knew I couldn't justify it. But then I remembered the vouchers! At £20, I had £30 left for the rest of the outfit. It was game on.

One element of the outfit I'd been worried about blowing my budget on was the shoes. I knew I wanted to create a daytime outfit so I only needed a pair of little ballet flats, but even at the cheap end of the scale they can be £20. As we walked through Debenhams my Mum said "you need some pale blue flats", and I'm not kidding you, the second I turned around I laid eyes on the shoes. £15! I was now onto £35, with £15 remaining for a top.

I decided I wanted a yellow top, and my Mum found one straight away, but at £18 it was just out of budget. We even went to the counter and got the girl to scan everything just in case anything was secretly reduced, but no, we were over budget. Then we stumbled over a display of simple jersey tops, and there was a yellow one - £8! With £7 left to spare we found a necklace and after a quick trip to the changing room we were done! We got to the counter, where the same girl who helped us earlier said "that's fifty pounds exactly"! So here's what we came up with... 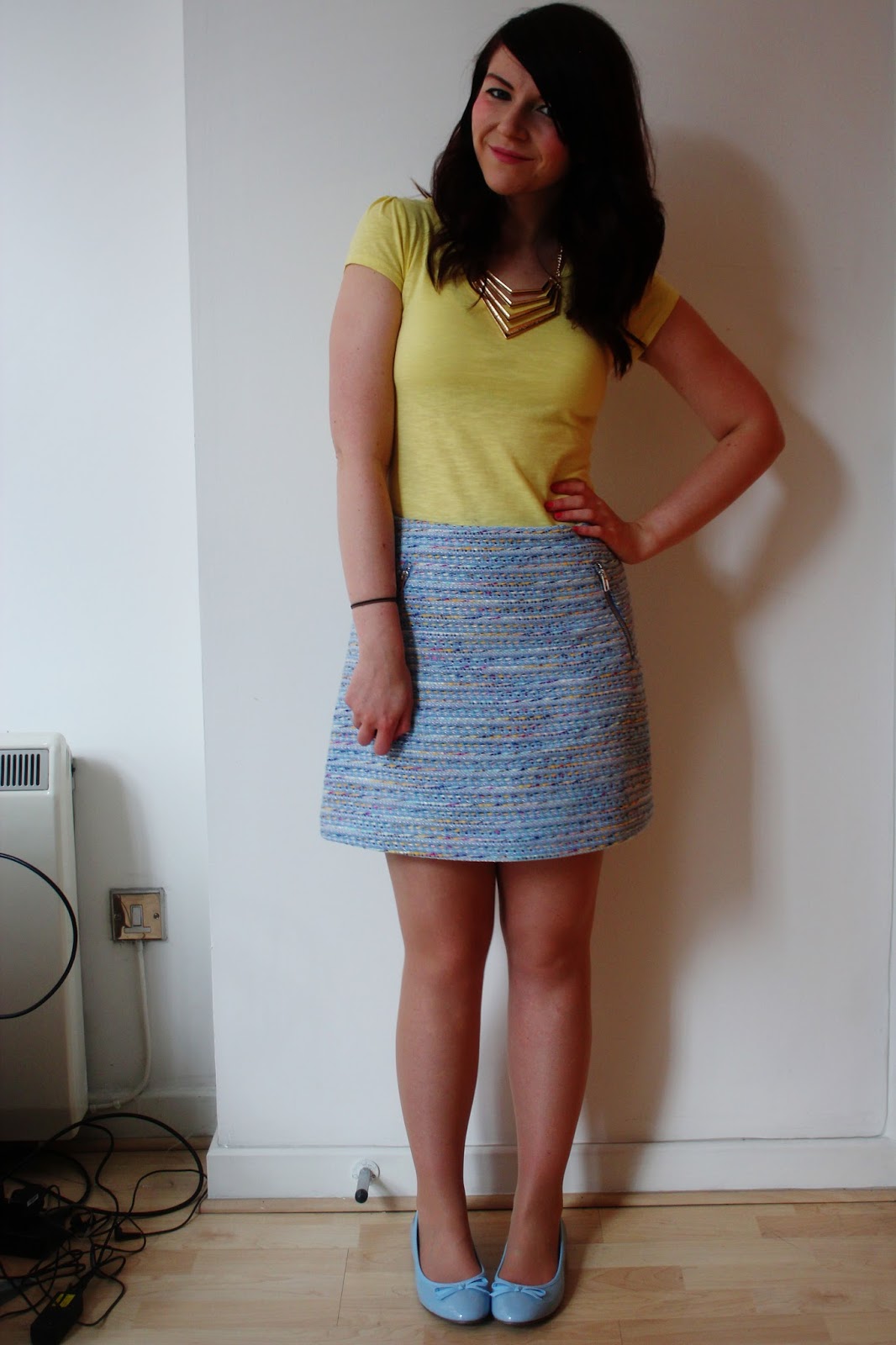 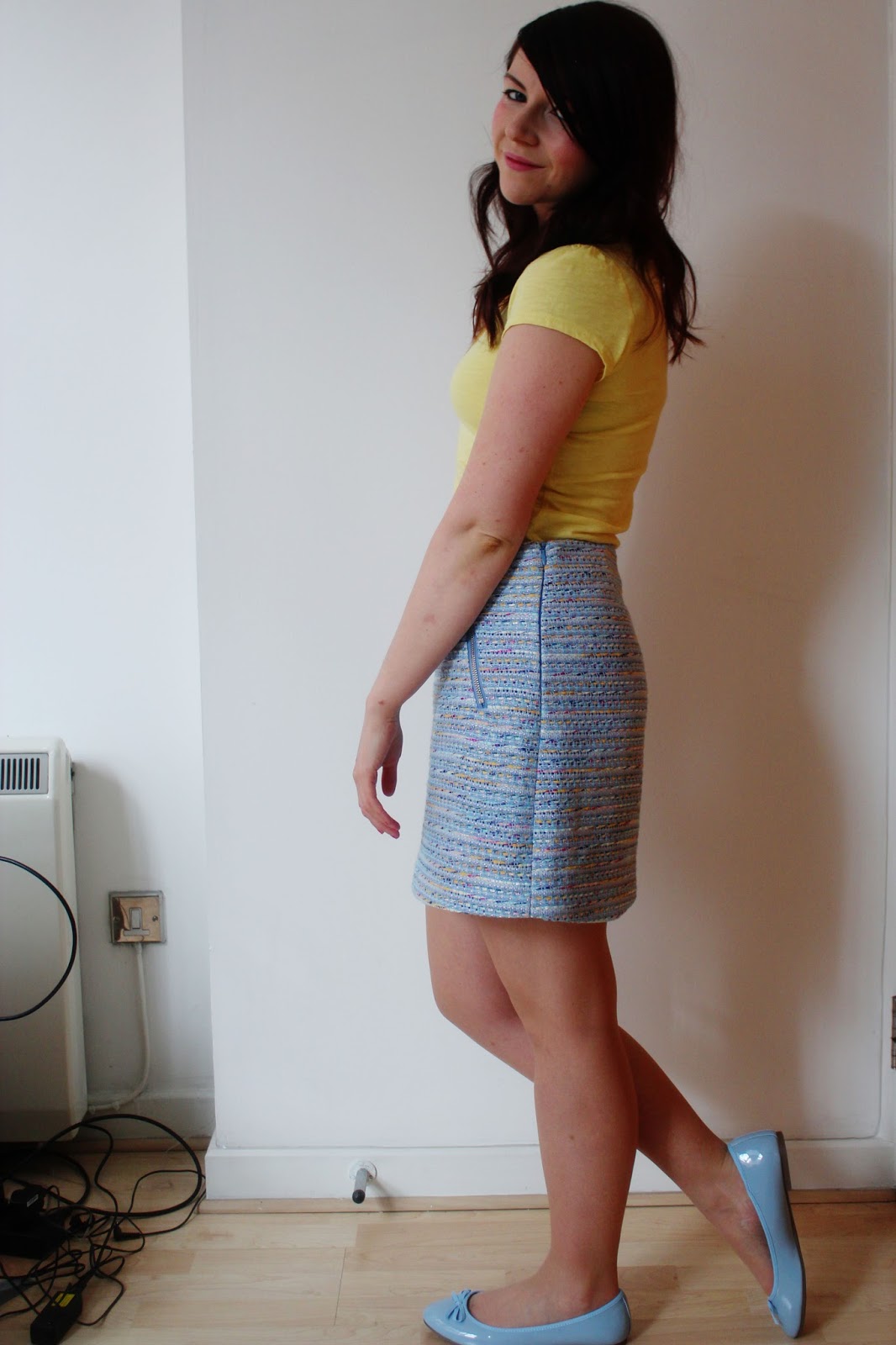 Everything Debenhams with vouchers c/o ThinkMoney 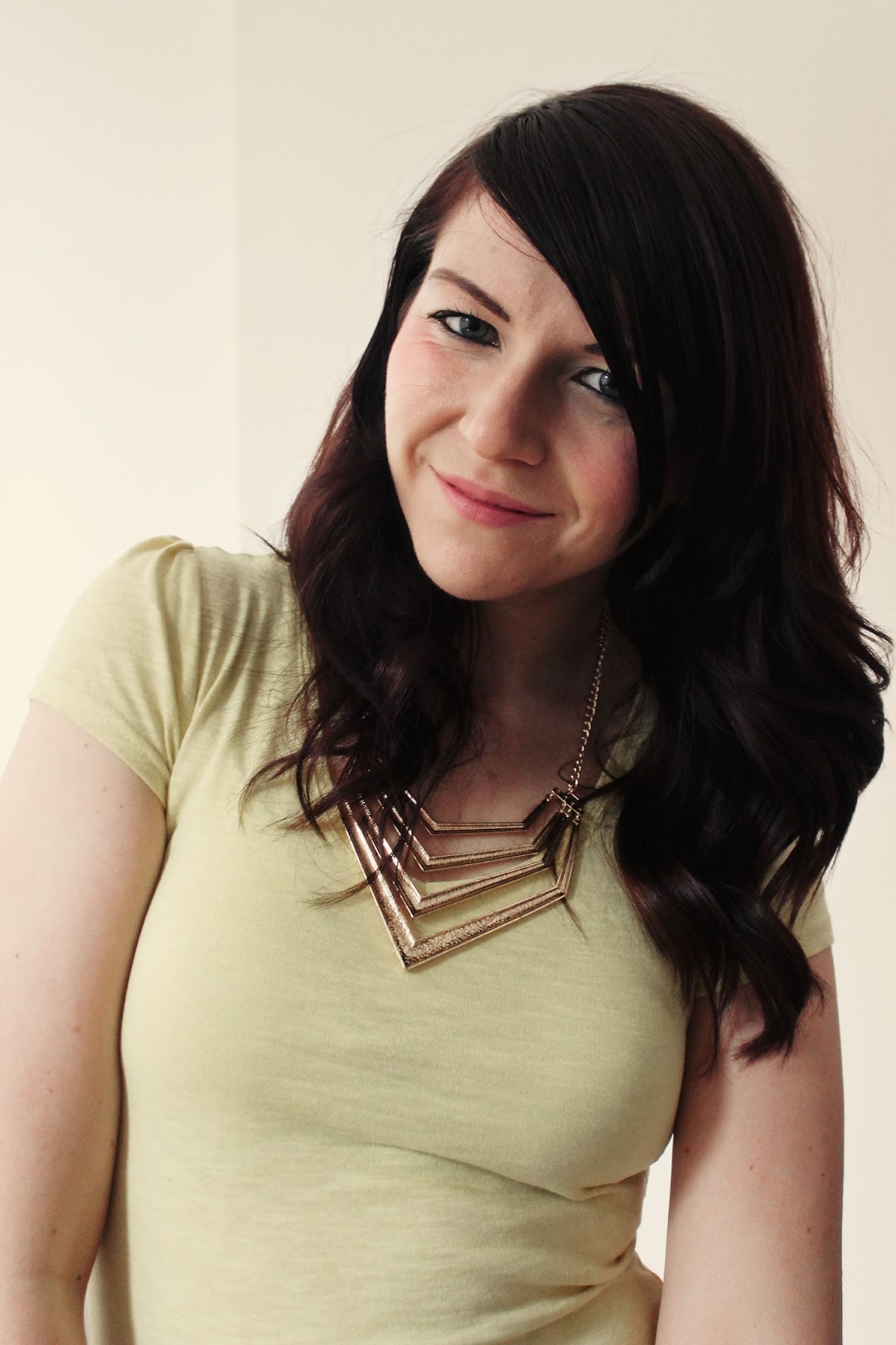 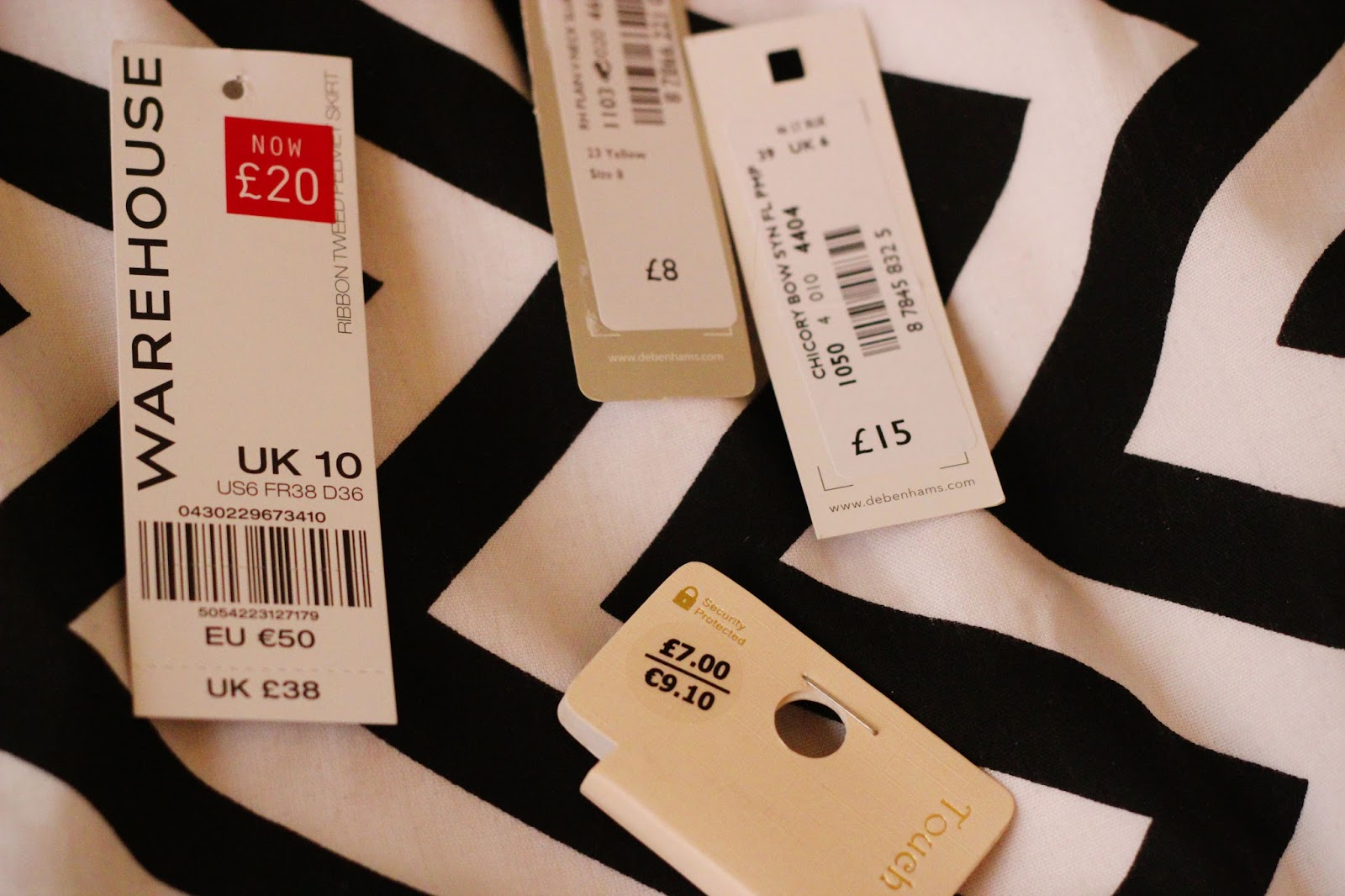 Just for proof!
I was so happy with what we came up with. I wasn't sure about the tshirt at first because the skirt is slightly too big (they didn't have a smaller size and the opportunity was just too good to miss) so I would have preferred a looser top so it didn't draw attention to the waist of the skirt, but to be honest, I don't think you can tell! I'm really happy with this outfit, especially because I can definitely wear each of these items again. I've been wearing the necklace absolutely loads, the shoes and top will be perfect for summer and I cannot wait to wear this skirt in the autumn/winter. 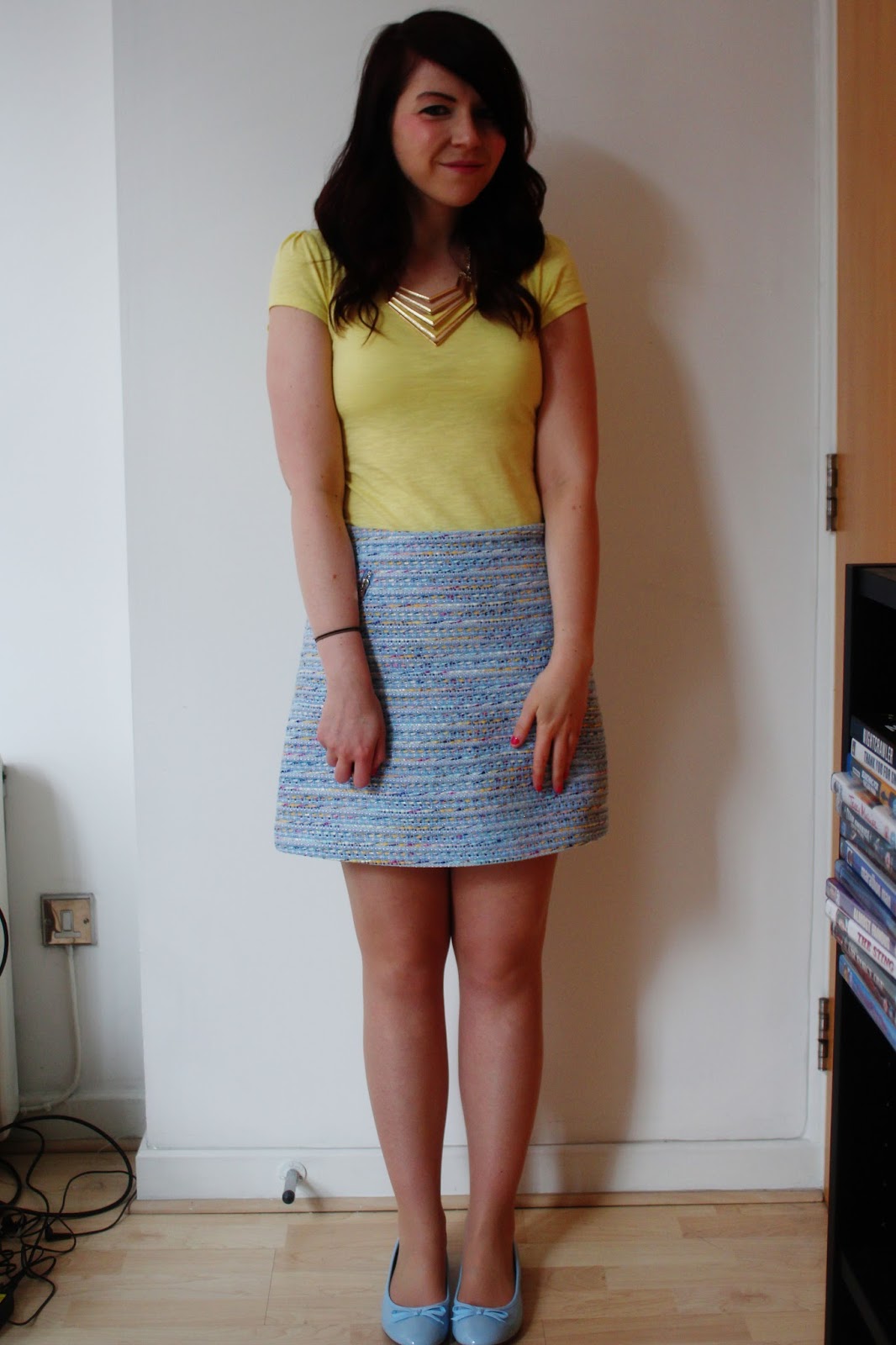 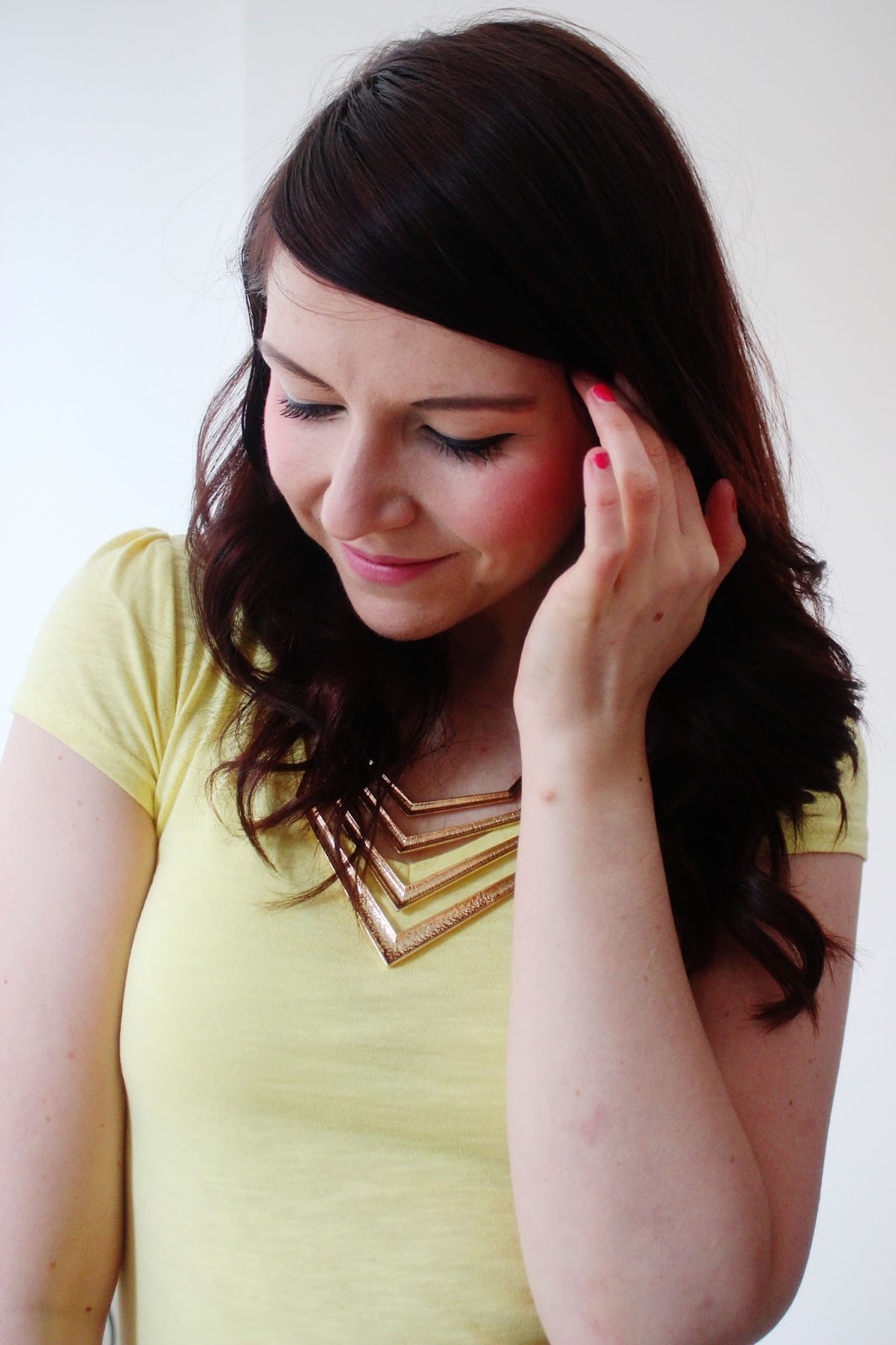 I was hoping to get this post up last week but I've actually been ill for the last few days! I was off work sick last Monday due to feeling incredibly nauseated and fatigued and spent the whole morning in bed. I felt better on Tuesday and went into work but started with a cough. By Thursday I thought I was feeling better, but then Friday my sore throat and cough just got worse, and by Saturday the cough had gone straight on my chest and I had a horrible, wheezy cough. I'm not too proud to admit that I had a huge cry on Saturday morning when Phil told me it probably wasn't a good idea to go to Parkrun. At my Parkrun they have pacers on the last run of the month, and I was chasing another PB (even though I only got one the week before last - 27:47, which still seems insane to me considering three months ago I was working on getting under 30 minutes) but I knew deep down it would have been a bad idea, and it's a good job I didn't go! On Saturday we went to the theatre with my parents, Phil's parents and his sister, and after dinner Phil's Dad said to me "are you getting better or worse?" and I think that was the moment I realised I was actually getting worse!
I woke up yesterday with a throaty cough like I smoked 40 a day and no voice! I had to cancel all my plans for the day and ending up sleeping and on the sofa all day. I definitely didn't manage the 10 mile run I had planned! I'm feeling better today and I'm glad I pushed myself to work (even though I worked from home - I didn't want to infect everyone in the office/put makeup on) but choir is out for tonight cause I still can't speak properly, let alone sing!
So I'm home tonight feeling sorry for myself as Phil has just gone to his parents for the night as he's off to Wimbledon tomorrow! The only good thing about being ill is that I've had plenty of time to read (I read two books last Monday, finished one yesterday and am hoping to finish another tonight), but I'm hoping to have an early night tonight so I can try to go for a run tomorrow.
Hope you had a lovely weekend!