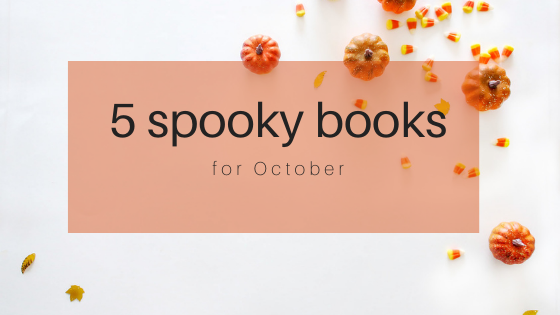 I wrote in my September Life Lately post that I wanted to write some more short posts and not dedicate 3 days and 2000 words to every single topic.

So inspired by my friend, Michelle, who is both brilliant at writing short posts and loves October, here's a little mini post on some of my favourite spooky books for Halloween season.

Now I love a spooky book, and I've loved a spooky book since the Point Horror books of my teens. In fact, until a few years ago I would read any scary book but I was terrified of most scary films (this has changed a lot - I'm planning a post on my favourite scary films soon too!).

When I went through my Goodreads to hunt for my favourite scary books, I found myself with a stupidly long list (what me? Writing a long list? Me who wrote a post so long I lost count of all the points?), and it was also way too hard to pick favourites.

So I went with my gut and went with the first books that came to mind when I think of spooky books (though these are all definitely in my top 10 favourite scary books). Some of these are old classics and some are more recent, but these are all great books for getting you in the spooky spirit this October:

Six Stories by Matt Wesolowski is a series of books set around a podcast called Six Stories (you know what I love nearly as much as books - podcasts!). Each book in the series is also a series of the podcast, and each episode is a story from someone involved in a spooky mystery.
It's a really tricky line to combine two mediums, especially as true crime podcasts are so popular, but what works so well about Six Stories is how it seamlessly blends the genres - it feels both like a podcast and a novel.
There are now four books in the series, Six Stories being the first. Six Stories follows the story of the death of a teenager ruled as misadventure, but not everyone is convinced. The second in the series, Hydra, is the story of a young girl who killed her family. Third is Changeling, the story of a missing child. And more recently, Beast, the story of a vlogger who is found frozen to death.
All the stories in the series are spooky, mysterious and ultimately incredibly compelling. I also found the series gets better and better as it progressed. I think this was originally meant to be a trilogy as Changeling nicely ties up the other stories, but Beast appeared early this year so I'm hoping there might be more to come!

The Silent Companions by Laura Purcell

The Silent Companions is always the book I recommend to anyone asking for a spooky story, mostly on the grounds that it was so scary it made my friend sick. If that isn't a strong review I don't know what is.
Just thinking about the ending to this book makes my skin crawl. It is truly one of the scariest books I have ever read.
I really don't want to give anything away so all I'm going to say is this book is a hauntingly atmospheric gothic which is perfect for Halloween.

I could have put so many Stephen King books on this list, but I've kept it to just this one. I only read Pet Sematary last year as Phil had started to read it a few years ago not long after a bereavement and found it too sad to finish, which made me worried I'd find it too upsetting.
It is definitely the saddest of the Stephen King horrors I've read (I personally love when horror is also sad and deeply emotional - it's what I love most about The Haunting of Hill House), and I did find it incredibly upsetting, but it's also probably one of his scariest.
I would write a review, but I would say with this one, the less you know the better.
Honorable mentions here to my other favourite Stephen King books - The Shining and It.

Is Rebecca a horror? Is it a ghost story? Maybe not, but it's definitely a spooky book.
Rebecca is everyone's favourite book for a reason - it's atmospheric, it's dark, it has moments that stick with you for a lifetime.
It's the perfect book for autumn - spine-tingling, intense, haunting and unforgettable. And is it a ghost story? I guess that's for you to decide.

The Lottery and Other Stories by Shirley Jackson

Let's finish with some short stories shall we? And let's finish with the queen of the gothic, Shirley Jackson. The Lottery is the most famous story in this collection, but for me the story "Like Mother Used to Make" absolutely haunts me and I think about it all the time.
The titular story, The Lottery, does not disappoint either for its horrifying premise. This collection might have been written over 70 years ago, but it still feels as haunting today.
Labels: books horror lists october