6 Scary films (and one scary TV show) for October 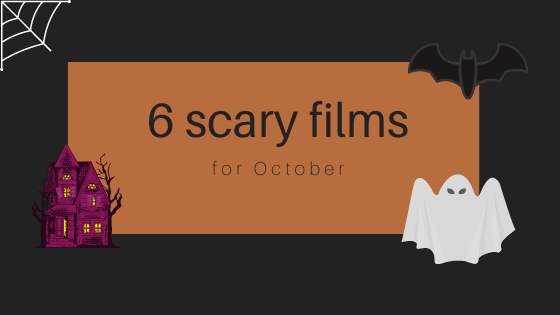 Following on from my post on spooky books for October, I thought I'd write about a couple of my favourite scary films too.

I used to HATE horror films, though like I said in this post I loved a horror book. I'd quite often read a scary book then be too scared to watch the adaptation!

Now I enjoy horror films much more, but I have very specific requirements. I hate gore. I can't even watch injections, so I am behind a blanket for anything gory. I also hate anything overly jumpy. And I'm good at knowing what is, as we call it "too scary for Charlotte" (it took me a loooooong time to watch The Exorcist, The Texas Chainsaw Massacre terrified me, and there are a lot of films I know I'll never watch). Basically, I'm still a bit of a wuss, but I'm trying.

So while I'm quite new to the genre (and there are sooooo many classic horror films I'm yet to see) I definitely have a few favourites. Like with the scary books, there are so many I wanted to include on this list but I've tried to keep it short, and to keep it to films I've seen more than once (with one notable exception) and one TV series.

Also, scary is completely subjective. And like I said, I'm a bit of a wuss.

So here are some of my favourite scary things to watch this October...

I was 16 the first time I saw The Shining and it terrified me. Then at university I read the book (my first Stephen King) and loved it so much I found the adaptation disappointing. Now it's one of my favourite ever films. It was one of the first films I ever saw with Phil and last October we went to see it on the big screen which was incredible. I've watched the documentary Room 237 about it. I have a tshirt with the carpet pattern on, and socks with the Grady twins on (thanks Riven!). I love it. It's one of my favourite films which still manages to scare me every time.

I only saw The Thing for the first time about 5 years ago, but it instantly became one of my favourites. I love the atmosphere, I love the tension, I love the practical effects (so many incredible moments!) and most of all I love the ending (no spoilers here I promise!). It's one of those films I think about a lot.

Cabin in the Woods

I watched Cabin in the Woods for the first time last October and it's now one of my absolute favourite films. I love everything from the opening scene to the way it subverts the genre to the final horrible climax. I love the little Easter Eggs in the background and I get something different out of it every time. Oh and it's really funny (you'll see from my next few entries I love a comedy horror). One of those films I could watch at the drop of a hat - October or not.

Until this weekend I hadn't seen Scream since I was a teenager and I have such bad movie memory that it was like watching a film for the first time.
Scream is absolutely genius, and definitely enjoyed it even more now I can really understand a lot of the references to other horror movies and the rules of horror. I found it absolutely great fun, hilarious and utterly meta. I can't wait to watch it again next October.

American Werewolf in London is a "Phil's family" film. I never get tired of the story of Phil's Mum going to see it when she was at uni in London and her friends having to walk her home because she was too scared (on the Underground particularly I think!).
We rewatched this last week and it's just utterly perfect. As I mentioned before I love a blend of horror and comedy and this film is just so iconic. Plus also, practical effects! I love them! I love learning about how they were done! Another of my favourites.

Okay I broke my own rule for this one, as I've only seen it once, but if I had £1 for every person I've recommend this film to during lockdown I'd be able to buy Bobby even more treats.
The first time we heard about this it was from Phil's brother, Andy, who knew a lot of the cast and crew from his Master's course. It sounded really fun - a horror film set, and filmed, during lockdown. But then we started to hear more and more people talking about it and knew we had to watch it.
One downside, it's currently only available on Shudder (we got a free 1 week trial to watch it), but I believe it is getting a theatrical release.
I cannot recommend this film more right now. As it's not only set during lockdown but filmed during it, it captures everything about this time perfectly, from the boredom to the struggling relationships to the endless Zoom calls.
If you watch one film from this list this year make it this.

The Haunting of Hill House

I'm sure I'm preaching to the converted here because I'm not sure I know one horror fan who isn't completely obsessed with this masterpiece, but I couldn't write a list without including it.
The Haunting of Hill House is one of my top 5 favourite TV shows of all time, and maybe my absolute favourite horror watch. I really enjoyed The Haunting of Bly Manor, but it was nothing like Hill House for its scares, its perfect editing and its haunting sadness.
I'm simultaneously still reeling from some of the scares (the car! The entirety of episode 5!) but also desperate to give it a rewatch (the genius of episode 6!). It's one of the best things I've ever watched (but watch out for those hidden ghosties!).
Hope you're having a spooky October!
Charlotte
Labels: films horror lists october