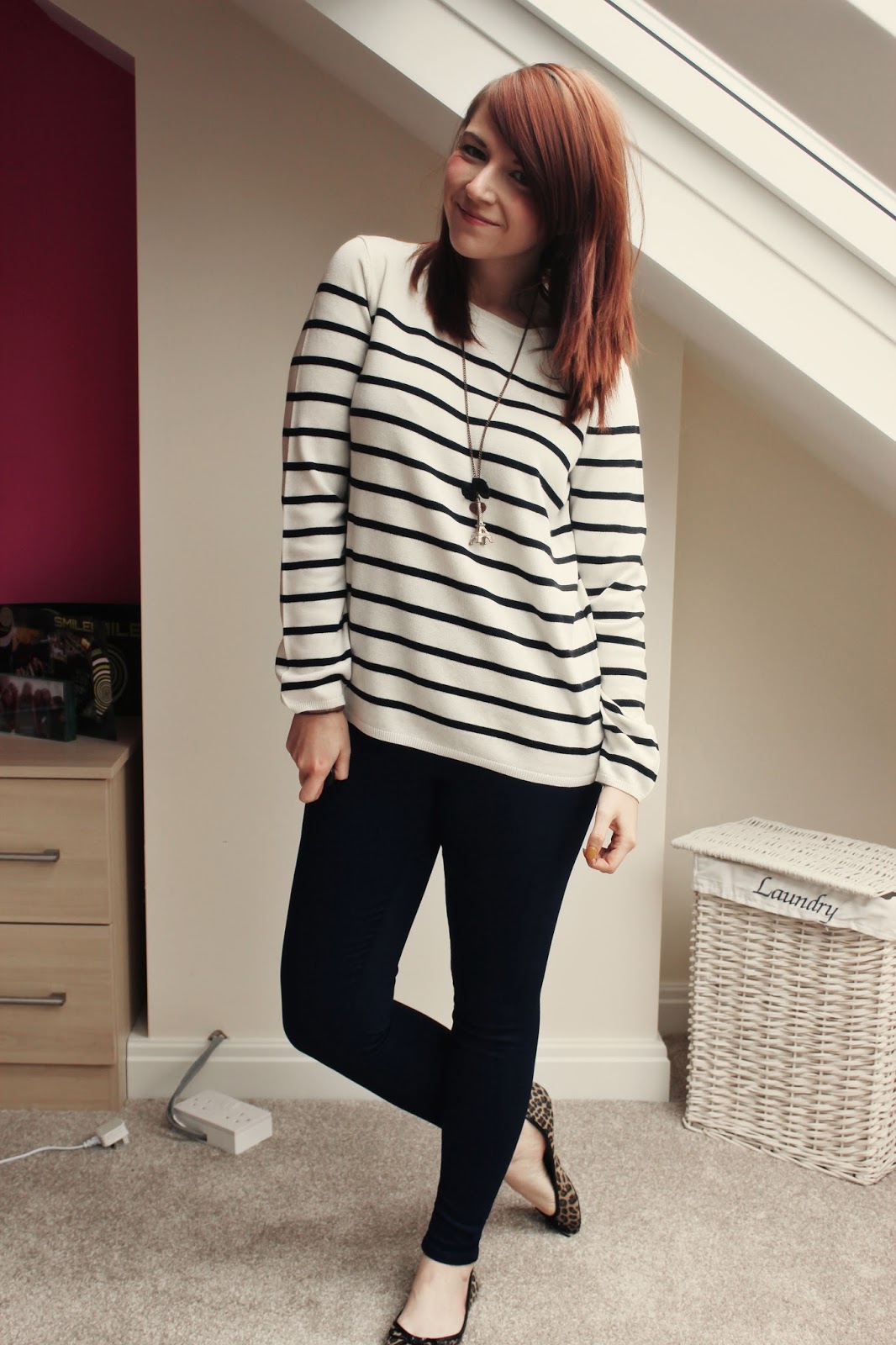 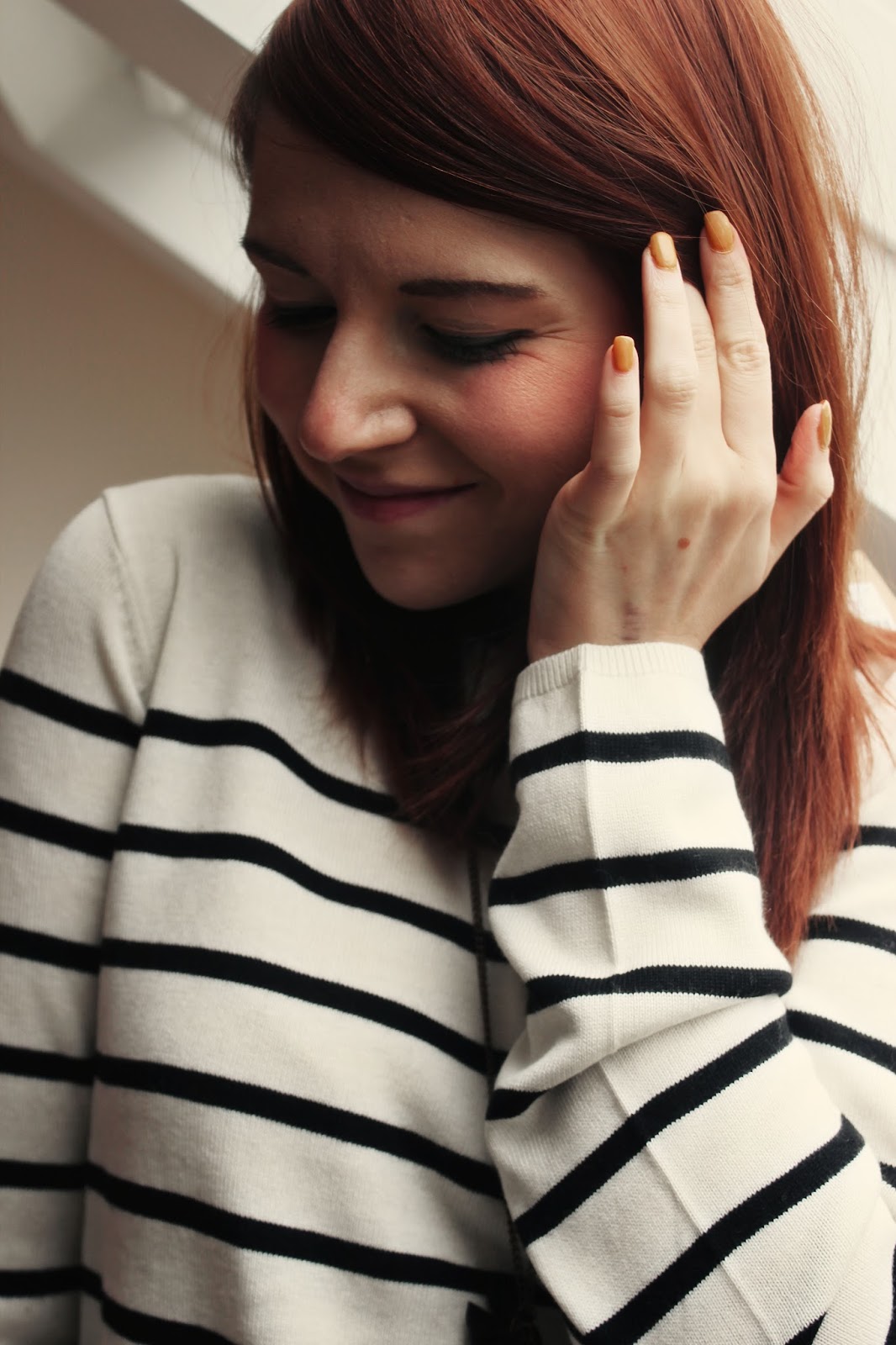 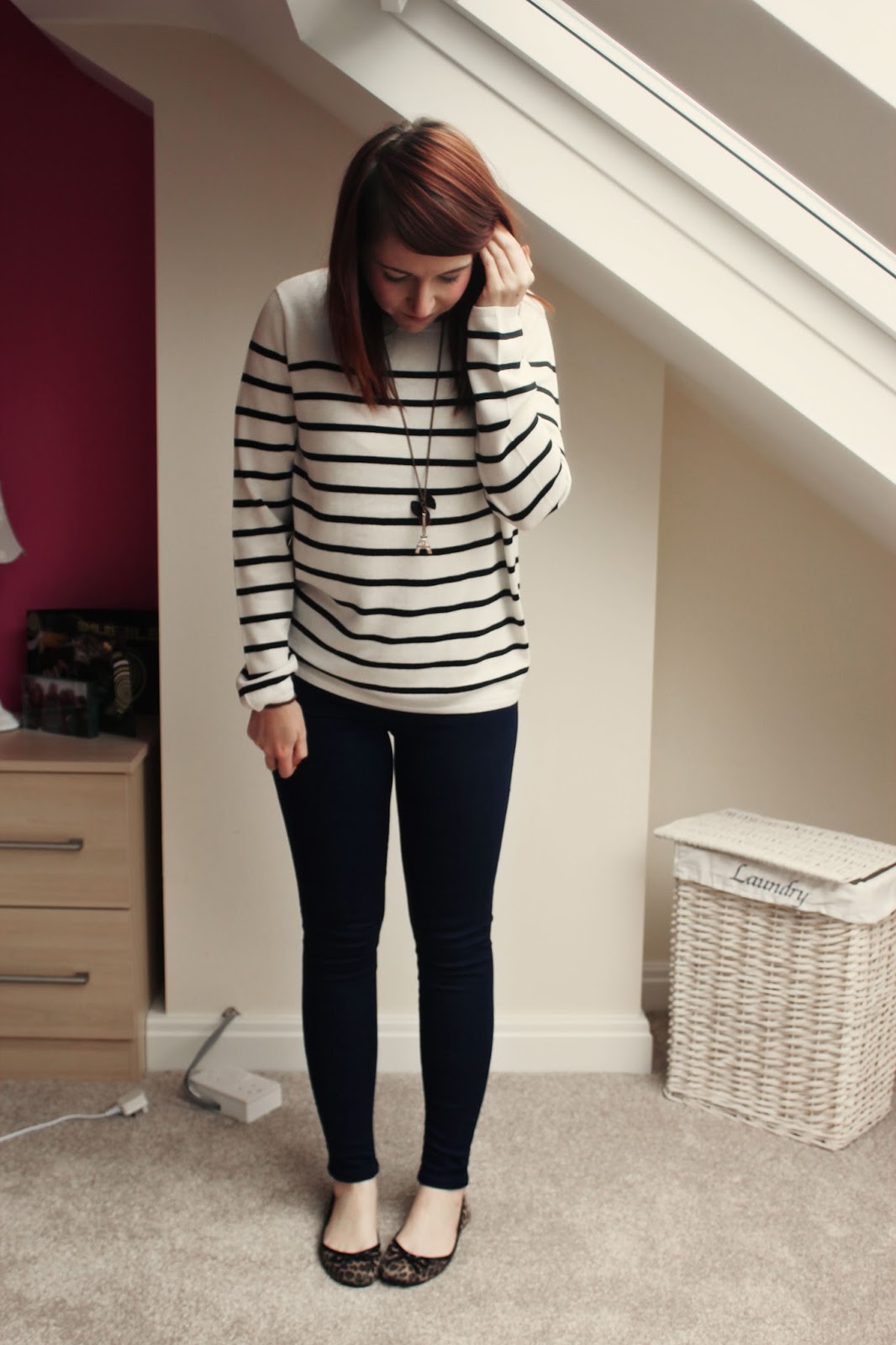 On Thursday I realised, much to my dismay, that my absolute favourite Leigh jeans had a tiny hole in the inner thigh. I knew it was coming- I've had them for almost three years now and wear them at least once a week, and plus their twin pair in black had ripped a few months earlier. I knew it was time, but I wasn't ready to let go. As a girl who hates wearing jeans (let alone buying them!), Topshop Leigh jeans were a revolution. Stretchy, comfy and without the "fits-my-hips-but-not-my-waist problem", that I know many pear-shaped girls like me understand. These jeans turned me from someone who never wore jeans to someone who wore them all then time. Initially my first response was simple to rebuy them. However it turned out Topshop had stopped doing the Indigo colour a few months ago, so I wouldn't be able to get the exact same pair. Which led me to start looking at other options. I considered New Look jeans on Natalie's recommendation, but a few people told me the quality and stretchiness wasn't as good, so I decided not to fix what wasn't broken and to head back to Topshop. Then the conversation turned away from Leigh and onto Joni. Now I have always had a love-hate relationship with high-waisted jeans. I've also found if they fit right on the hips, they are too big on the waist, or worse, fit fine for a few weeks and then after a wash go too big. So I popped to Topshop after work, picked up a pair of Leigh jeans (in a darker blue wash) and also a pair of Joni jeans. As soon as I tried them on, I loved them. However, I started chatting to Sarah and Sian about them, and Sian told me her Joni jeans stretched out and she had to size down. I'd bought my Joni jeans in my usual size and they fitted perfectly, but I panicked then and decided I should try on a smaller size. I hit Facebook and Twitter for advice. I was already going to Outfit the next day, so I begrudgingly took off my lovely new jeans that I was planning to wear and headed to outfit to try on a smaller size. As it happened, they didn't have the intense blue colour that I loved in the Joni jeans in the smaller size, so I stuck to my guns. Some people have told me they stretch out, some have told me they haven't, so fingers crossed they won't. 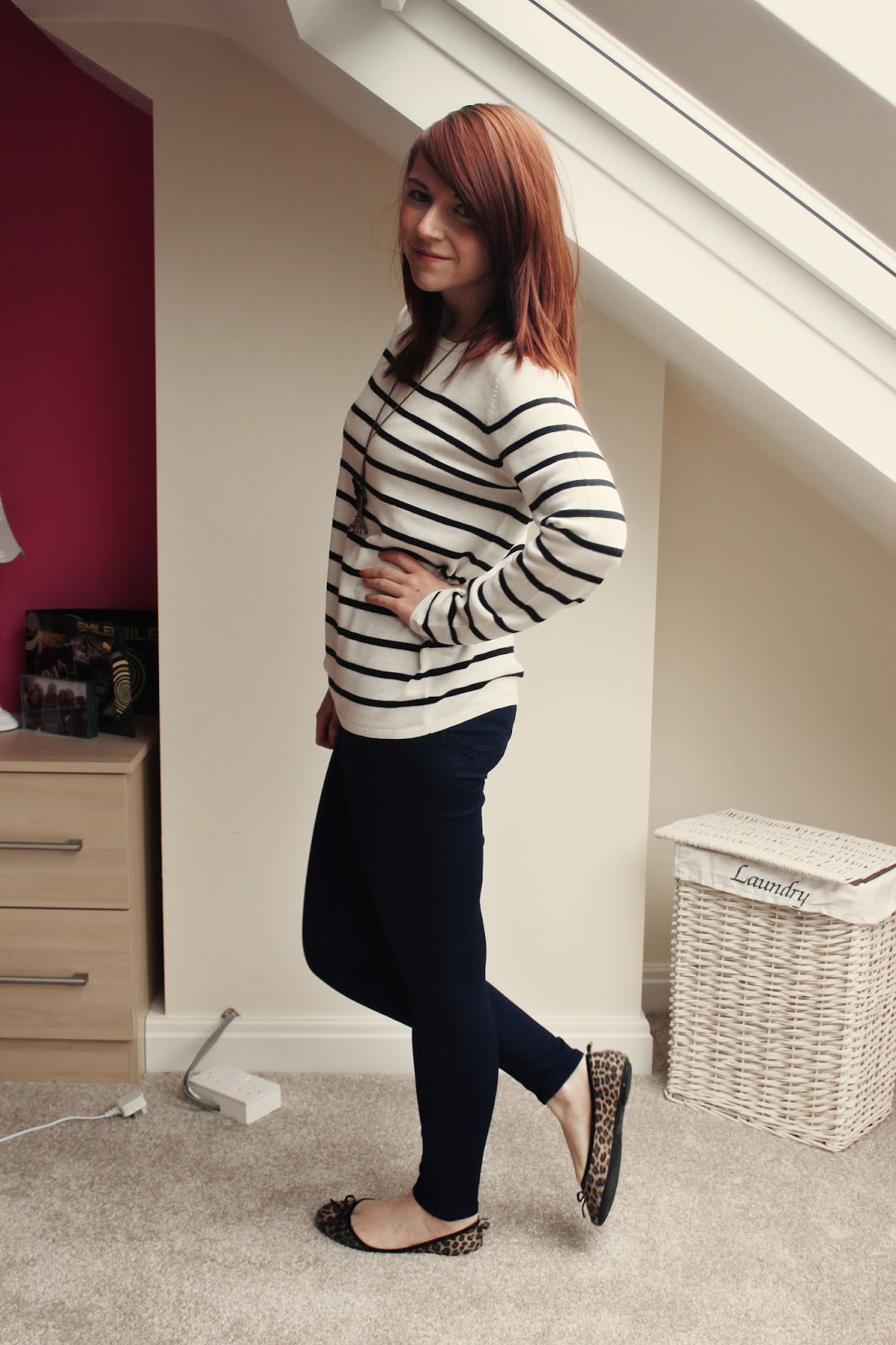 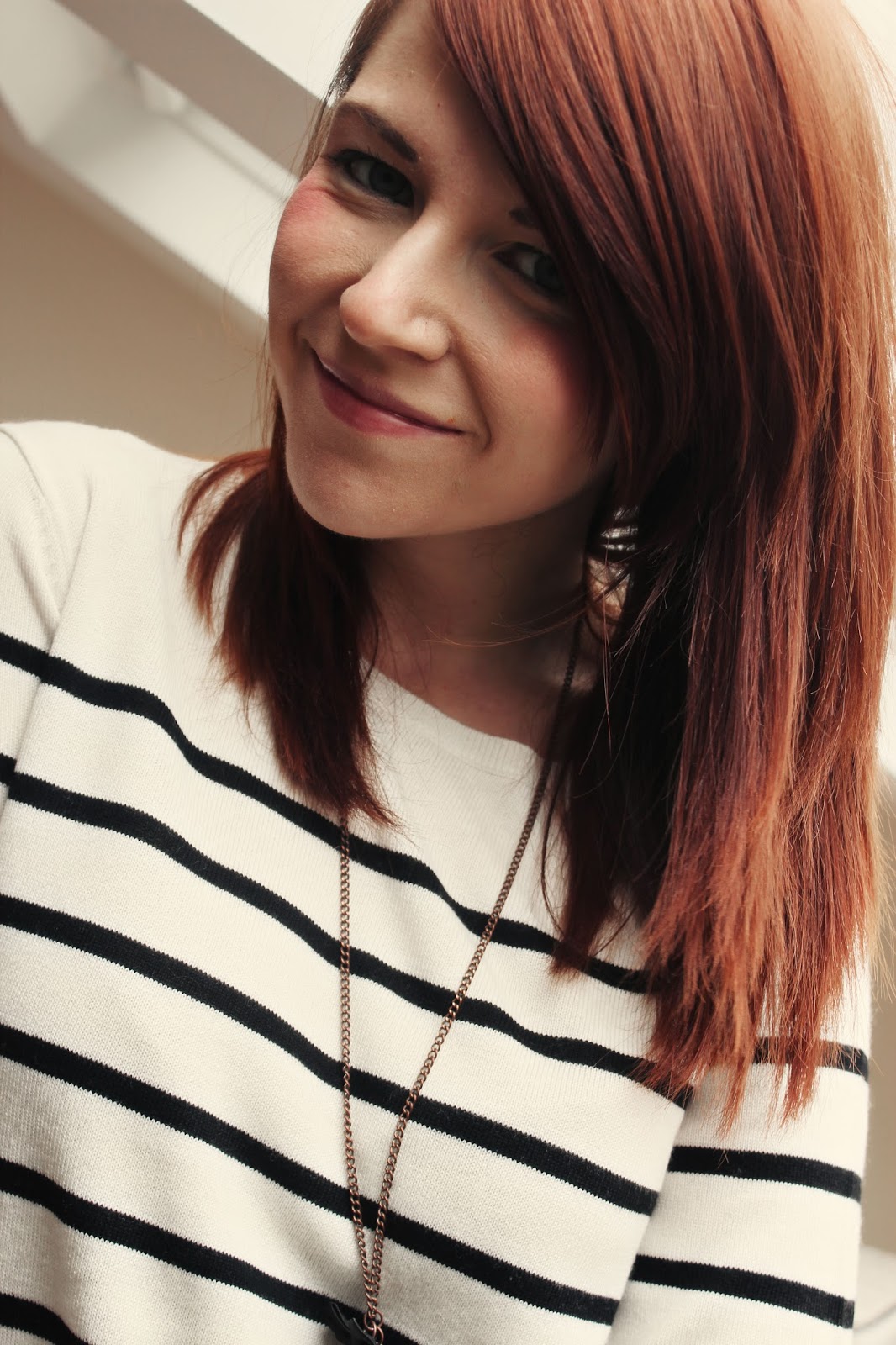 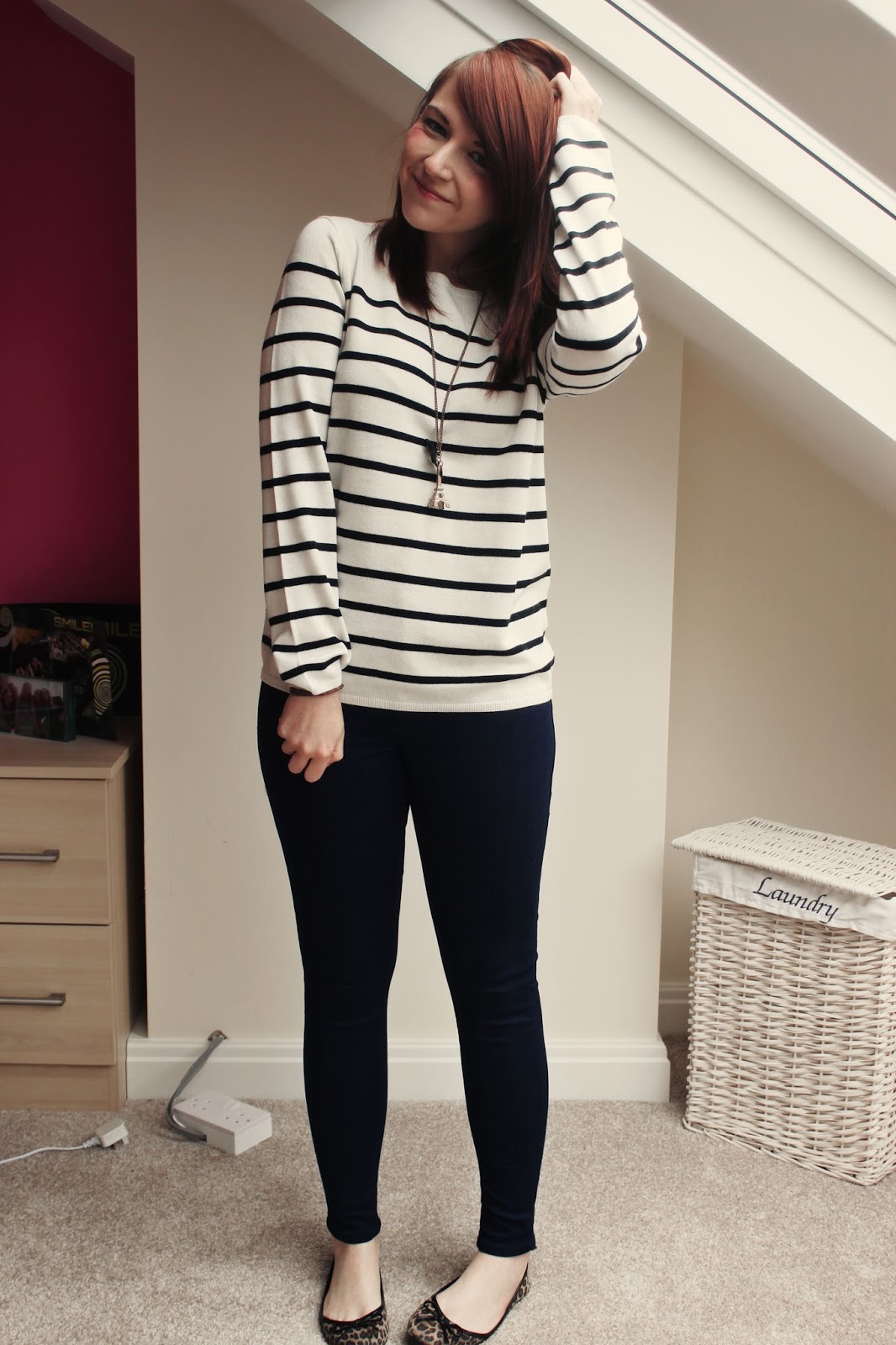 Anyway! One of the reasons I decided to lean towards Joni was to have the option to wear them both high waisted and regular waisted, so I thought I would show you two outfits- one with them worn normally and one with them high waisted. I actually wore the first outfit on Saturday and the second one today. This jumper was sent to me by Hush and it is my new favourite jumper. It is so snuggly and warm, and has that perfect slouchy fit that I didn't think I could pull off. I have a feeling it's going to be worn a LOT this winter! The second outfit is another super casual one- just my favourite Brand New tshirt and ballet flats. A typical Sunday outfit for me! I also added my leopard cardi later but I didn't realise I would need it when I snapped these photos. 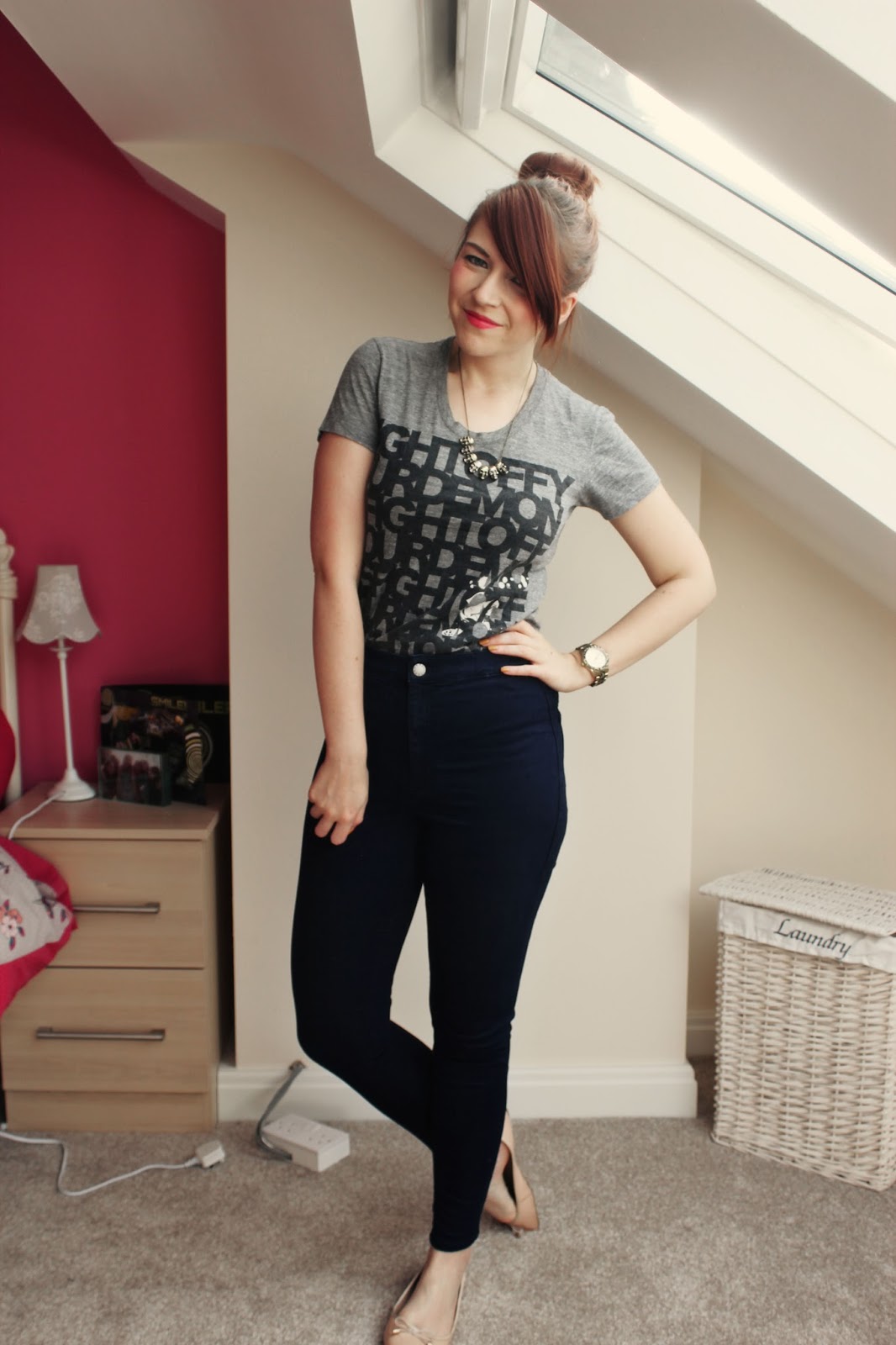 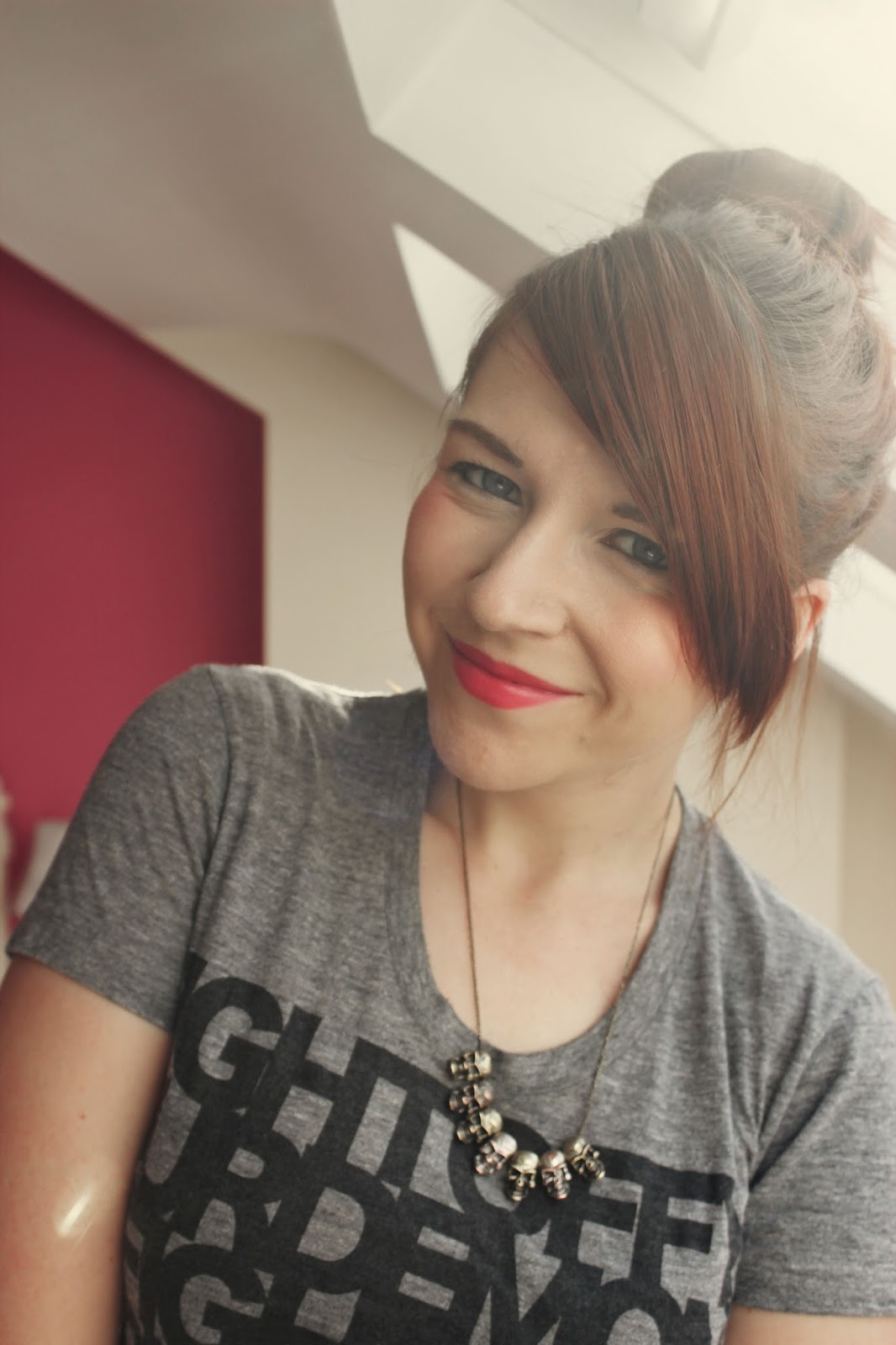 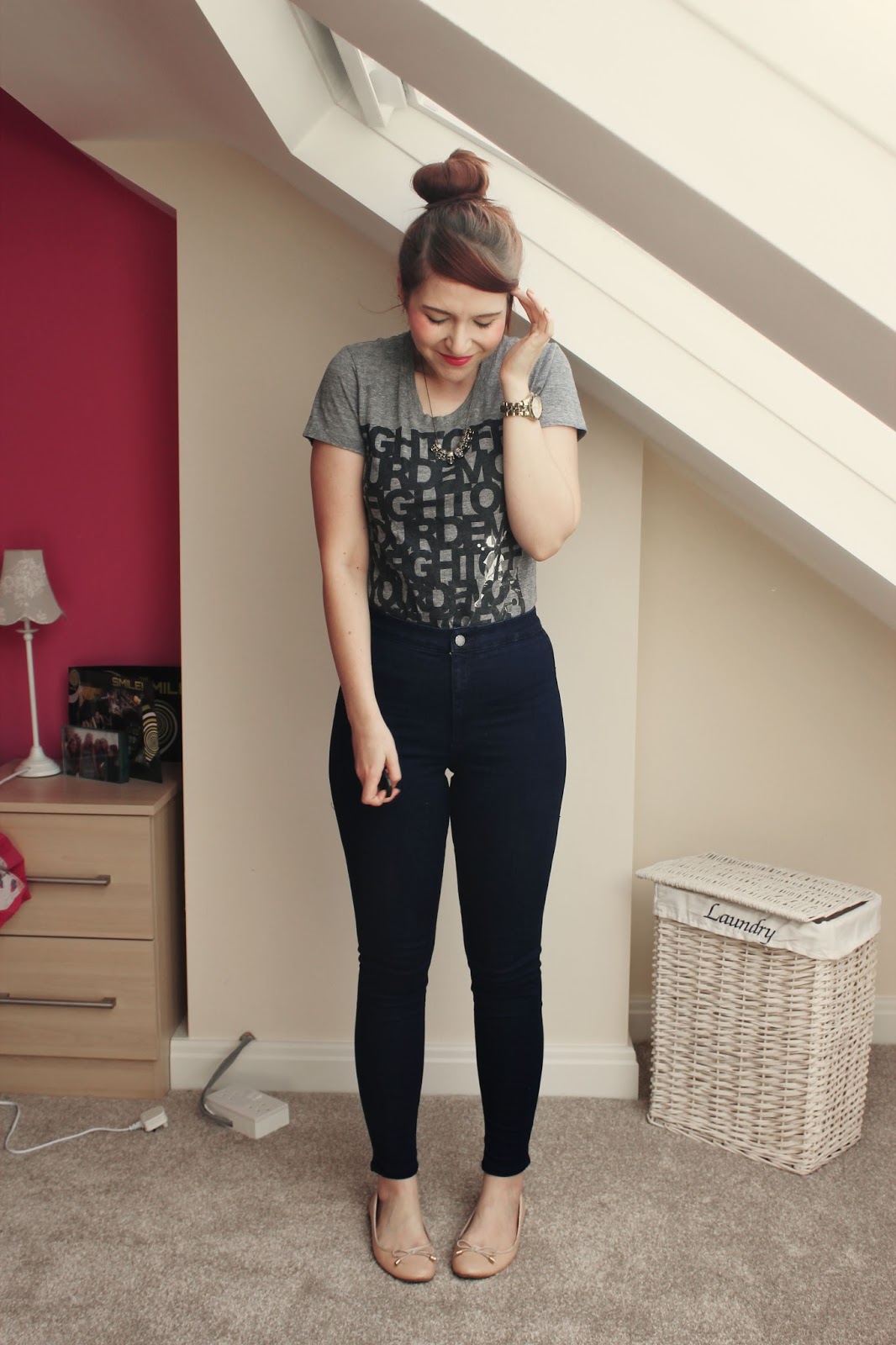 I'm trying not to buy too much for Autumn Winter (apart from these jeans, obviously). I have so many jumpers and cardigans I can hardly close my knitwear drawer (yes, I have a knitwear drawer. Is that weird?) and I have lots of dresses I can layer over, plus I think I definitely have ten coats (or more!) now. With Phil and I moving in together after Christmas I know I won't be able to take all my clothes with me so buying loads of new things seems redundant. So what's on my A/W list? A new pair of black ankle boots, a cream cable knit jumper (I've been looking for the perfect one for years), a grey sweatshirt and this leather skirt from Oasis. I'm going to pop into Manchester on my lunch to buy it next week as they didn't have it in Outfit yesterday. I was hoping I could exchange it for the other jeans and then it wouldn't feel like I was spending anything. Does anyone else feel like that? 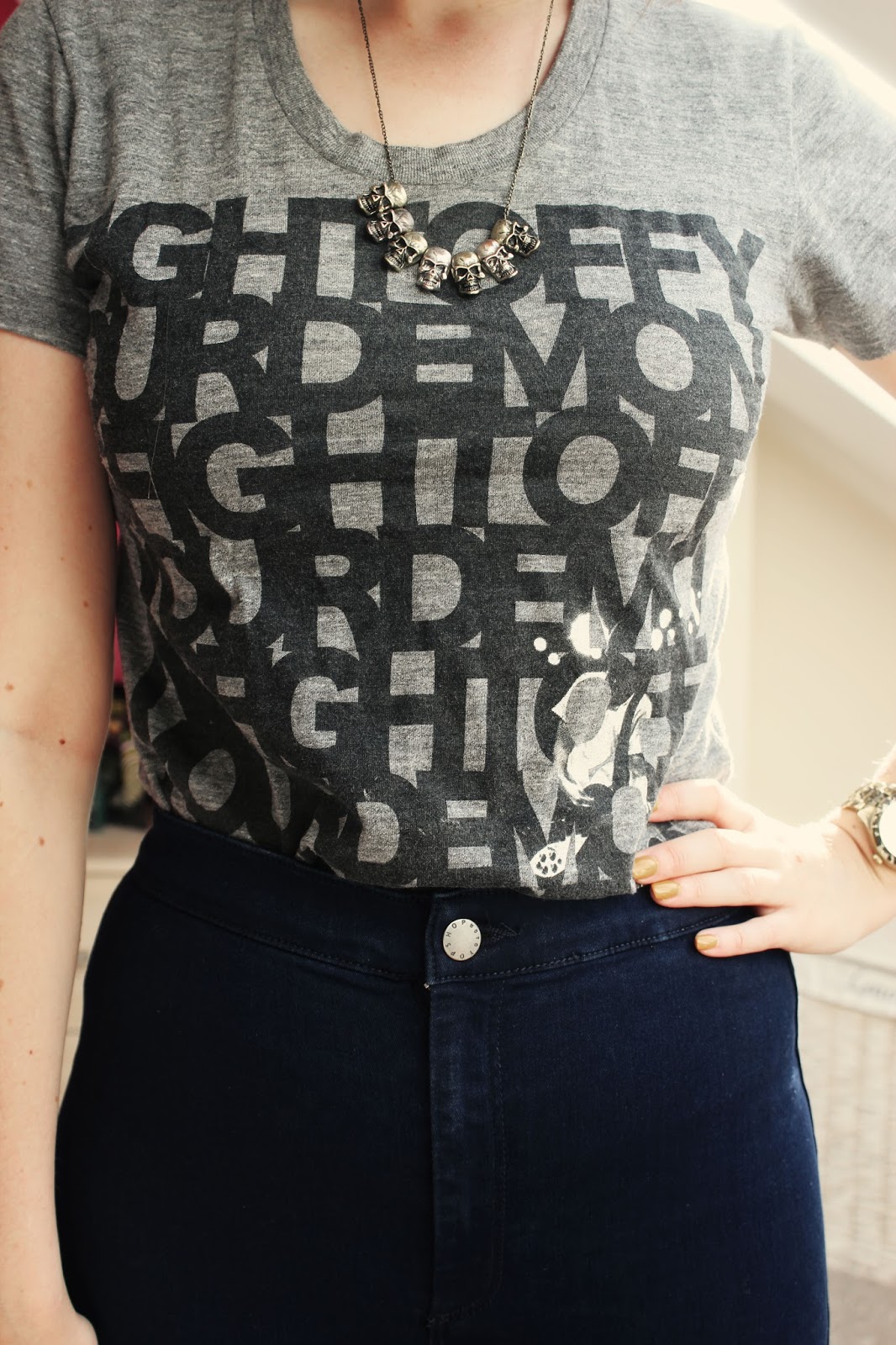 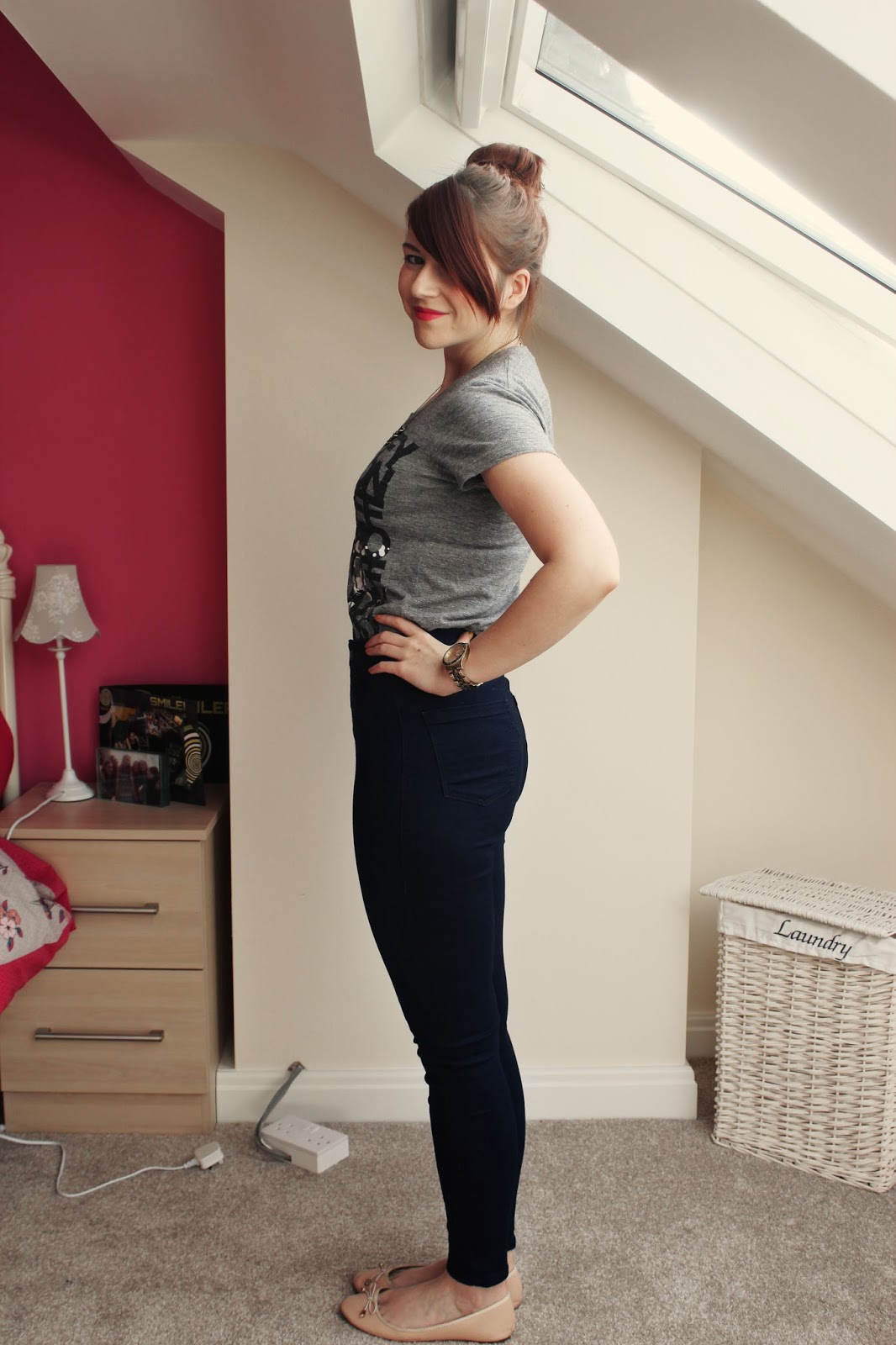 Wow I feel like I have a lot to say today- sorry! I planned to get a post out on Tuesday and took the photos before work, but on my walk to work on Tuesday (it is literally about five minutes) my foot was hurting so badly that I decided I needed to go to A&E, so that was where I spent Tuesday evening. I had an X ray and the doctor doesn't believe it is a fracture but that it is just a sprain or a strain. I'm not entirely convinced because I read that sometimes stress fractures are too small to be seen on an X Ray, but he told me it should recover in three to six weeks. However it's been two weeks since it first started hurting now and I think it feels like it's getting worse rather than better. I'm giving it as much rest as I can (I'm not much of a rester) and trying to keep it elevated (when I remember) but I'm getting very frustrated. I keep cursing runners in my head when I see them run past. I want to be able to run again! 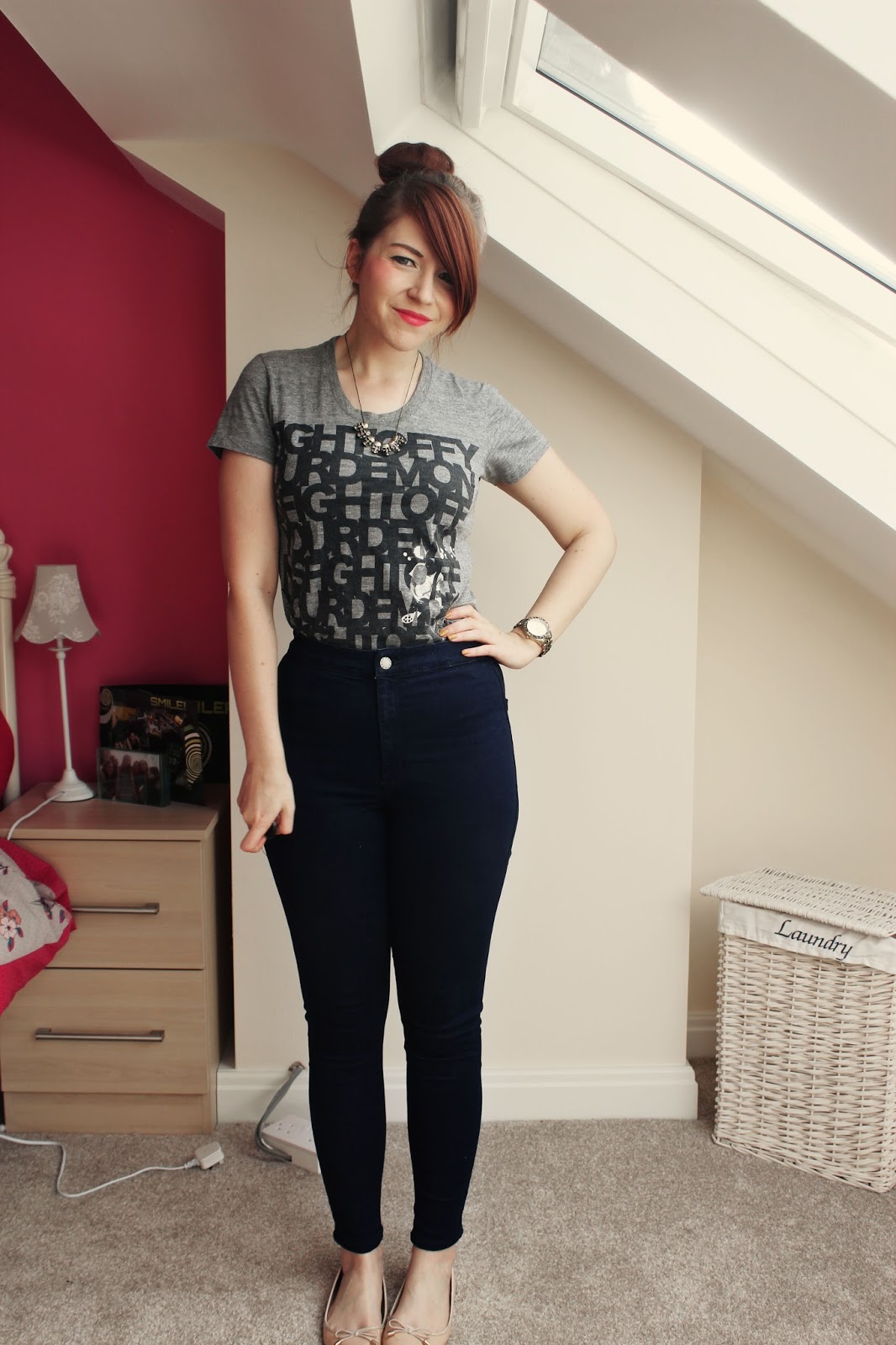 I've had a really quiet weekend, which has left me feeling a bit bored and tired. I felt like I had a really long week this week so I was ready for a quiet one but now I'm kind of fed up! Last night my parents went out so Phil and I had the house to ourselves and he's got me watching Friday Night Lights because he loves it (I like it so far!). It's nice to have a boxset to watch at the moment while we're both living at our parents' cause it means we don't have to go out for dates all the time. Today I've done my usual Sunday shop and Sunday cooking. I've made lentil and coconut milk soup and a big pan of red cabbage so far, and I'm going to make a veggie shepherd's pie with sweet potato mash this afternoon.