I've always loved the idea of subscription boxes.
I'm the kind of person who LOVES surprises and loves anticipation. I'll eat the part of the meal I'm looking forward to last. When it's my birthday I ask "which ones do I know about?" and open them first so I can savour the excitement of a surprise. Similarly, when it's someone else's birthday I give them an "order" to open their presents so the one I'm most excited about is last.
So as you can imagine, the idea of a subscription box is pretty exciting to me.
The only problem is that the majority of the ones I've come across have been beauty boxes, and I'm quite boring and predictable when it comes to beauty. I don't need 5 more mascaras or two new blushers, plus I always wonder whether things would match my skin tone (do they do surveys or something? They must do, right?). I also hate the idea of not getting fullsize products because I know what I'm like and I'll fall in love with something and I'll want it RIGHT NOW because I know I'll never be able to bring myself to use up the whole small one.
Anyway, I digress.

One thing I can never have enough of is nail polishes.
Ask anyone who lived with me at uni - I used to have dozens. Maybe almost 100.
I had every shade of pink, blue, red, yellow (remember when everyone used to do ombre nails and added various degrees of white to their existing colours? I genuinely just had enough colours to own five slightly different shades of blue. Okay, ten.), and often came home with a new polish only to find I already had it.
However when I went to America in 2012 I started biting my nails again and stopped painting them completely. It was also during a period of flux and moving and I ended up losing my entire nail polish collection somewhere during all the moving (I'm convinced they are all sadly dried up in a bag somewhere at my parents'). But last year (almost a year to the day) I had acrylic nails put on for the first time and managed to finally, FINALLY break my life-long nail biting habit.
So I started to rebuild my collection.
This time it was only two or three reds. Maybe only one yellow. Five shades of pink.
As I mentioned in my last nail post, I have a bit of a nightmare with my nails and can't keep polish on for more than a day, so it felt redundant to spend loads of money on polishes and loads of time painting my nails, only to have to redo them again the next day.
As a result I have quite a sorry collection of nail polishes.
But despite rarely painting my nails, I love having them done. I always feel so pretty when I have my nails done, especially now I actually have nails and not just little stubs.

So when Nailbox got in touch a few weeks ago, I was so excited to find out a nail polish subscription box existed. And they're all full sized polishes! They contain brands such as Essie and OPI, and each box contains a selection of polishes and tools. So from £13.50 a month (or £15 for a one-off subscription) you can be getting at least four times that in products.

I received the May subscription box which contained: 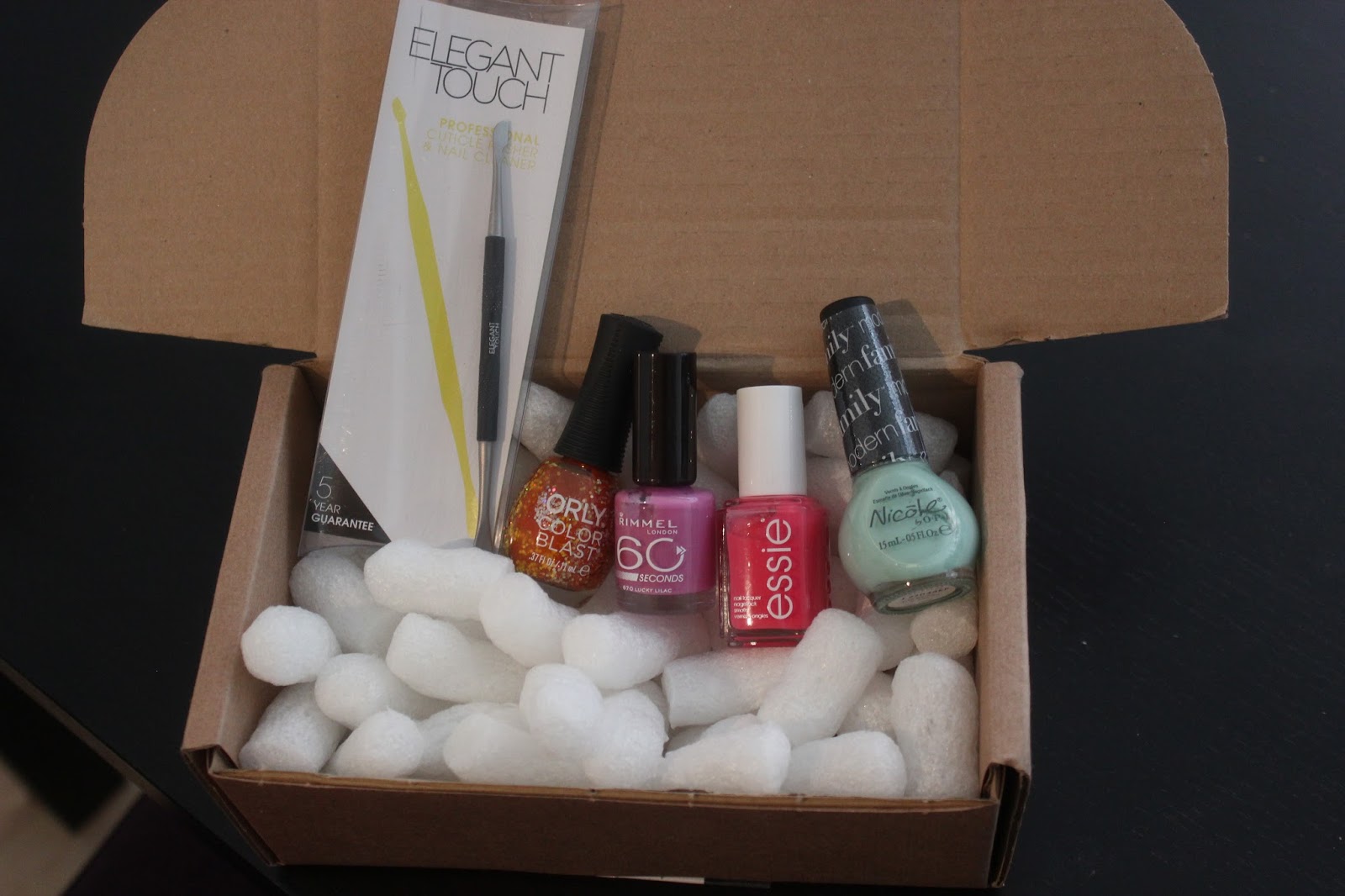 I was really impressed with the selection, especially as I've never owned a cuticle pusher and also because, with perhaps the exception of Fiery Orange, these are the exact kind of colours I would choose if I was buying nail polish.

Naturally, I went straight in for the bright pink... 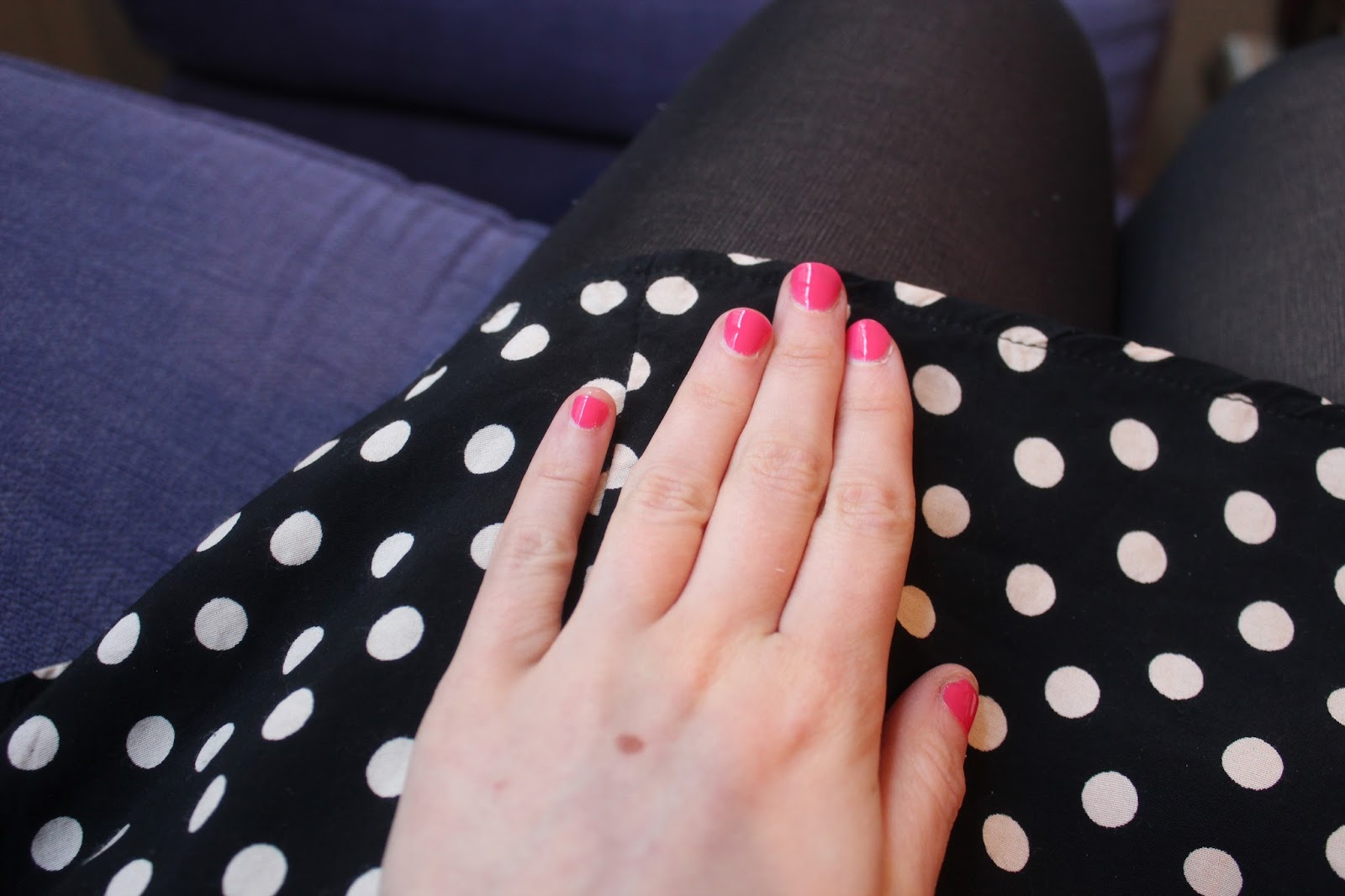 (I apologise - I am terrible at painting my nails!)
This was two coats with a base coat (Essie first base) and top coat (Sally Hansen) of Essie Status Symbol. I haven't tried the other colours yet, but I am so excited to try that lovely mint green! If you want to see swatches of the other colours you can find them at Nail Lacquer.

Overall, I was really impressed with Nailbox, so much so that I really, really want a subscription! It's the kind of thing I would love to receive as a gift, and it's perfect for someone who is a regular nail polish buyer because you get so many products for the price! Right now I would definitely sign up if I didn't think Phil would kill me for ending up with 48 new nail polishes over the course of a year...