We all have our vices.
For some it's drink or drugs or food, or handbags or shoes or dresses.
For me, it's recipe books.
I love them.

For Christmas last year I got 6 new ones. For my birthday I got 5.
I have 4 pre-ordered and one hanging out in my Amazon basket, waiting for me to cave.

It's not just about cooking from them, although that is obviously a huge part.
I read them like novels, flicking through them, reading the steps.
I trawl the internet for reviews on blogs and on forums. Trying to decide which recipes to try next.

It's a real love, and one I have no intention of giving up.

I've talked before about how I've tried to manage this addiction, and between January and April I didn't buy any new recipe books, and I blogged the recipes I'd made from my current books. But when I'm looking to buy a new recipe book (or justify a recent purchase!) I tend to look to forums and blogs for real reviews.

One of my favourite blogs is Cookbook a Month, where three friends work through the same cookbook over the space of a month and blog about it. I considered doing something like this for my blog, but I decided I didn't want to feel so restricted.

So instead what I am going to do is review my existing recipe books, based on the recipes I've tried. If I love reading about other people's experiences with recipe books, maybe someone else will enjoy this too!

When it comes to reviewing recipe books, here are the things I care about:


Also, I'm going to apologise now for photos. Photos will undoubtedly have been taken right before eating, when I'm tired and hungry and just want to take a photo taken before Phil starts asking, "can we start yet?". So I'm not going to win any food photography awards in these reviews..

For my first book, I'm going to be reviewing Aine Carline's Keep it Vegan. 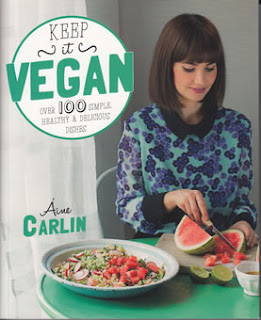 You probably already know this, but I am not vegan (I am pescatarian though). However, I really love buying vegan recipe books purely because they give me new ideas and because they are often much more creative with the things I love - vegetables and beans and lentils.
I asked for this book for my birthday after reading some really great reviews, and when it arrived I spent my birthday evening flicking through and writing a list of the recipes I wanted to make on a post it note to stick in the front of the book (I do this with all my recipe books, and yes for me that's my dream way to spend my birthday evening!). This is also the way I judge a new recipe book - the more recipes I'm excited about, the better the book.
I had a good list of recipes from this book, and after doing some sleuthing online (Twitter is a great place to search for recipe book reviews), I added a few more to the list. 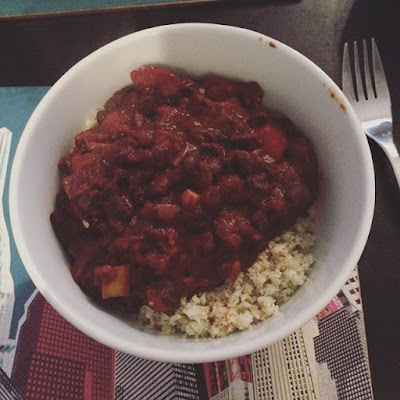 I love a good chilli, and although I already have a favourite (Cookie and Kate's sweet potato chilli), I am always on the quest for the best vegetarian chilli. This took a while to make for midweek, and was tasty, but, in the words of my notes "not life changing." I'd probably make it again, purely because I rarely make chilli midweek, and this involved mostly storecupboard ingredients.
If you fancy giving this a go, the recipe is available on the Telegraph website. 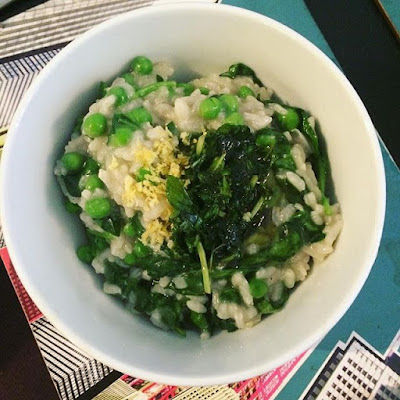 So, context. I don't really love rice, I'd never made risotto before (and never order it in restaurants) and I only made this because a few people on Twitter said it was amazing. And oh my god was it amazing. There were a few fiddly steps (like boiling water in a pan - I used a kettle), and I hate it when recipes say "heat the oil" and give no indication of the temperature, but it came together relatively simply, and like Aine, I do enjoy the stirring of a risotto. I was really impressed with this, particularly with no cheese. I did agree with another reviewer (Epicurean Vegan) who said the "mint oil" was nowhere near thin enough to pour, so like her, I just spooned mine on top.
It said it served 2-4. We got 2 portions for dinner and one portion for leftovers. Which I think was about right.
So this was a huge hit. Something I would never have considered making, but would even make for a dinner party. Although I will remember to add the lemon juice next time...
Recipe here. 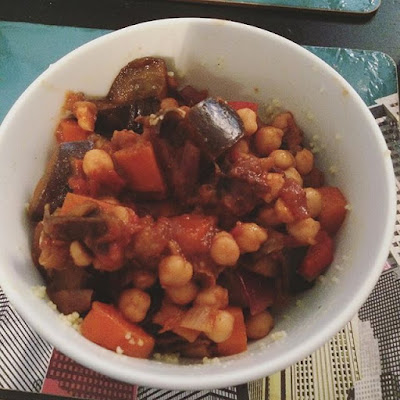 Tagine is one of my favourite foods, and I already have a few go-to recipes, but like chilli, I'm always keen to find something as good as in a restaurant. I had a few small issues with this dish - it asks you to simmer when there is no liquid, there's no guidance on temperatures, I had to add a mug of water (however I did used tinned tomatoes so that could have made a difference) and I thought some of the ingredients here were a bit expensive (I used regular dates instead of expensive medjool dates, and while I did have saffron, I think it's a bit indulgent and could easily have been optional). I also reduced the amount of cous cous (the recipe suggests 250g for 4 people, but my packet suggested 36g per person) and thought 3 tablespoons of oil in the cous cous was a bit much. I wasn't actually going to bother with the cous cous, but I'm so glad I did because it really made the dish. We got three portions, and it's officially up there with my favourite tagines. I'll definitely be making this again. 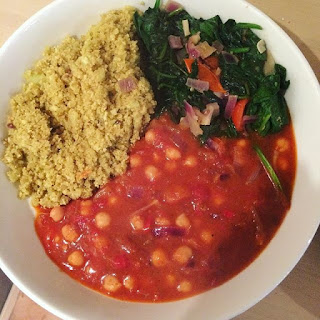 We eat quite a lot of chana masala at home because it's quite an easy dish and this was no different. It was easy and quick and not much different from my usual chana masalas. I did serve it with cauliflower rice and spinach and tomatoes from Veganomicon, which made it a really lovely meal. Oh and lots of mango chutney! 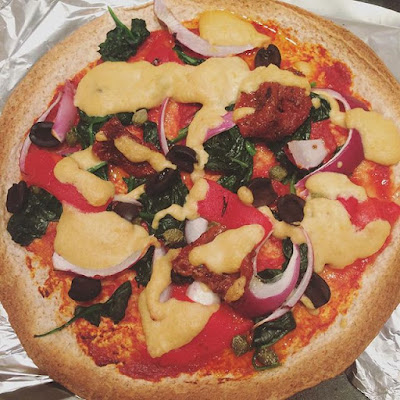 I really wasn't sure about this. I really know how I felt about serving my meat-eating boyfriend baked tortillas with houmous on top and declaring it pizza. But this was amazing. Aine advises using two tortillas as the base, and the tomato sauce is a mix of tomato puree and garlic puree. But the real star is the houmous topping. I thought houmous thinned with lemon juice would be too tart to be edible, and a base of tomato puree would be dry and tangy. But together it totally worked. While there were quite a few steps, these pizzas were quick and easy to make (although I did have to make them one at a time) and I loved using tortillas as a base.
Slightly adapted recipe here. 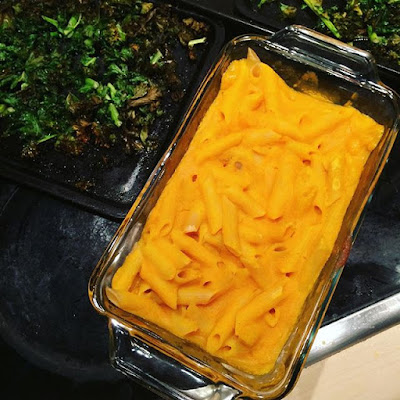 I've had little success in the past with vegan mac and cheese, and inevitably end up adding dairy milk or grated cheese in order to make it edible, but I've always been waiting to find a vegan version for when I want something a little bit healthier. I'm not the biggest fan of pasta in the world (which is challenging when you don't eat meat!), but every now and again I do love to make mac and cheese (Nigella's sweet potato mac and cheese is my favourite). I liked that this recipe uses roasted butternut squash and coconut milk instead of relying on cashews. I was very sceptical of whether it would really taste like cheese, especially without the addition of nutritional yeast, which seems to be prevalent in most vegan mac and cheese dishes. It was definitely a Sunday afternoon dinner, with the butternut squash needing an hour in the oven, and as we like our mac and cheese baked, I had to allow for 15 minutes baking time too. The verdict? It was tasty, although I have to admit it didn't really taste of cheese and didn't go crispy in the way we like it. I'll definitely make this again as an alternative to Nigella's, which really has to be a treat, however, I'd be curious to try to next time with some nutritional yeast. Oh but we both loved the crispy kale - yum!

Overall, I really love this book. I have at least another dozen recipes earmarked to try, and everything I've made so far has been a success. I would recommend this book to vegans and non-vegans alike, and there's a good mix of traditional vegan recipes (mac and cheese, chana masala), and more innovative dishes (Indian tacos, Swedish meatballs) that I can't wait to try. There didn't seem to be too many difficult-to-obtain ingredients, and with the exception of the mac and cheese, most of the recipes came together easily enough on a weeknight. I would have liked there to have been an indication at the start of each recipe of how long each recipe would take to cook, though. In terms of ease-of-use, there was some implied cooking knowledge, but not enough to deter a newbie.

I'll definitely be cooking from this book again, and the tortilla pizza, chickpea stew and mint risotto will undoubtedly become regular dinners in our house.