These are a few of my favourite things 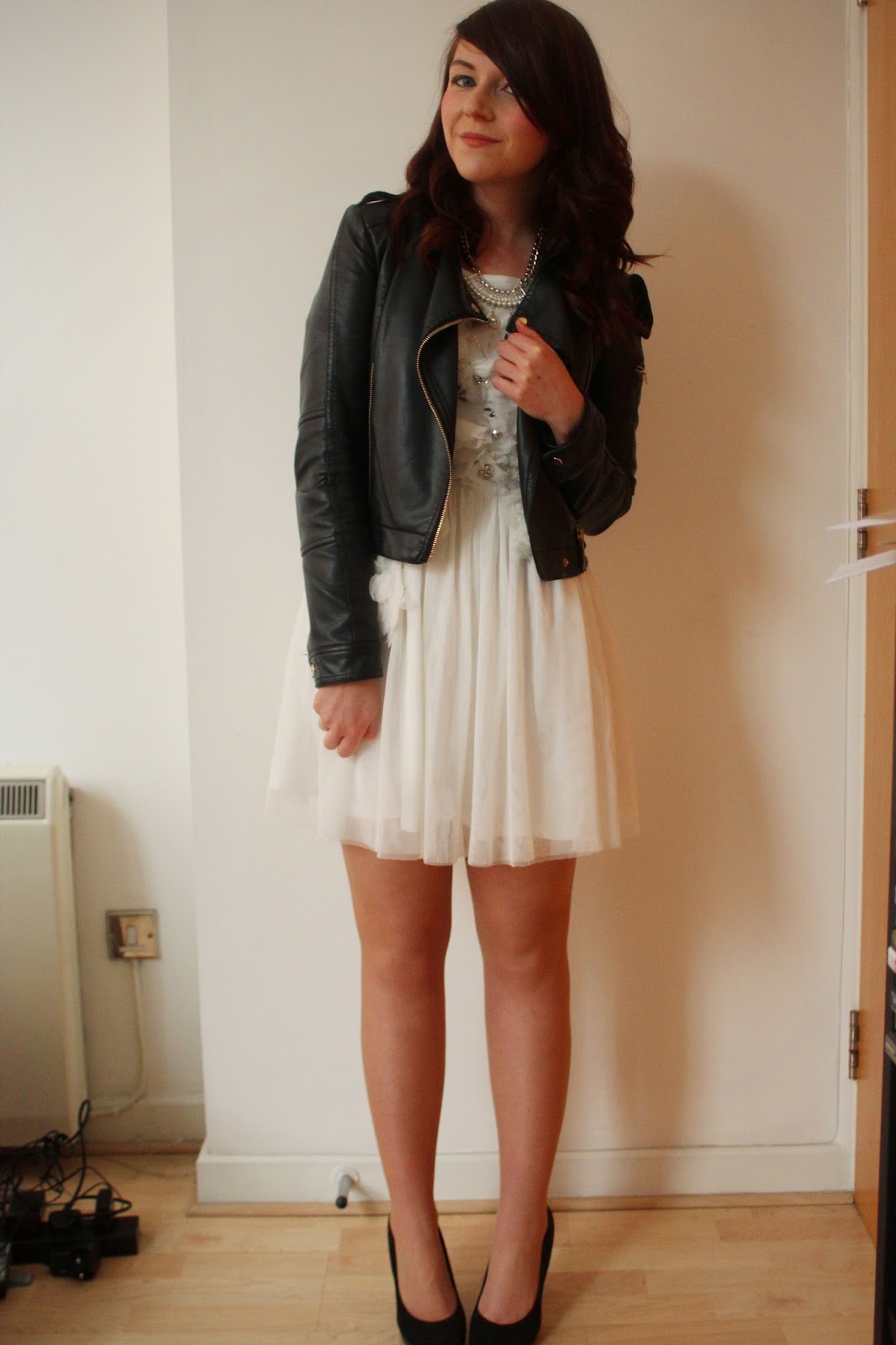 Growing up, I danced from the age of two. Ballet, tap, modern, jazz. Monday nights, Tuesday nights, Wednesday nights, Thursday nights. Sometimes Saturday mornings. I had swimming lessons too. Then horse riding. And I played the cello. And the piano. And I was in the school choir, and most of the school plays.
I'm 25 now, and not much has really changed. I work full time. Take on some freelance work when I can. Run this blog. Sing in a charity choir. Run a home and do all the chores that running a home involves, including cooking dinner from scratch every night. Oh and I'm training for a marathon.
I joke that if I was applying to university now I'd have a killer UCAS application. 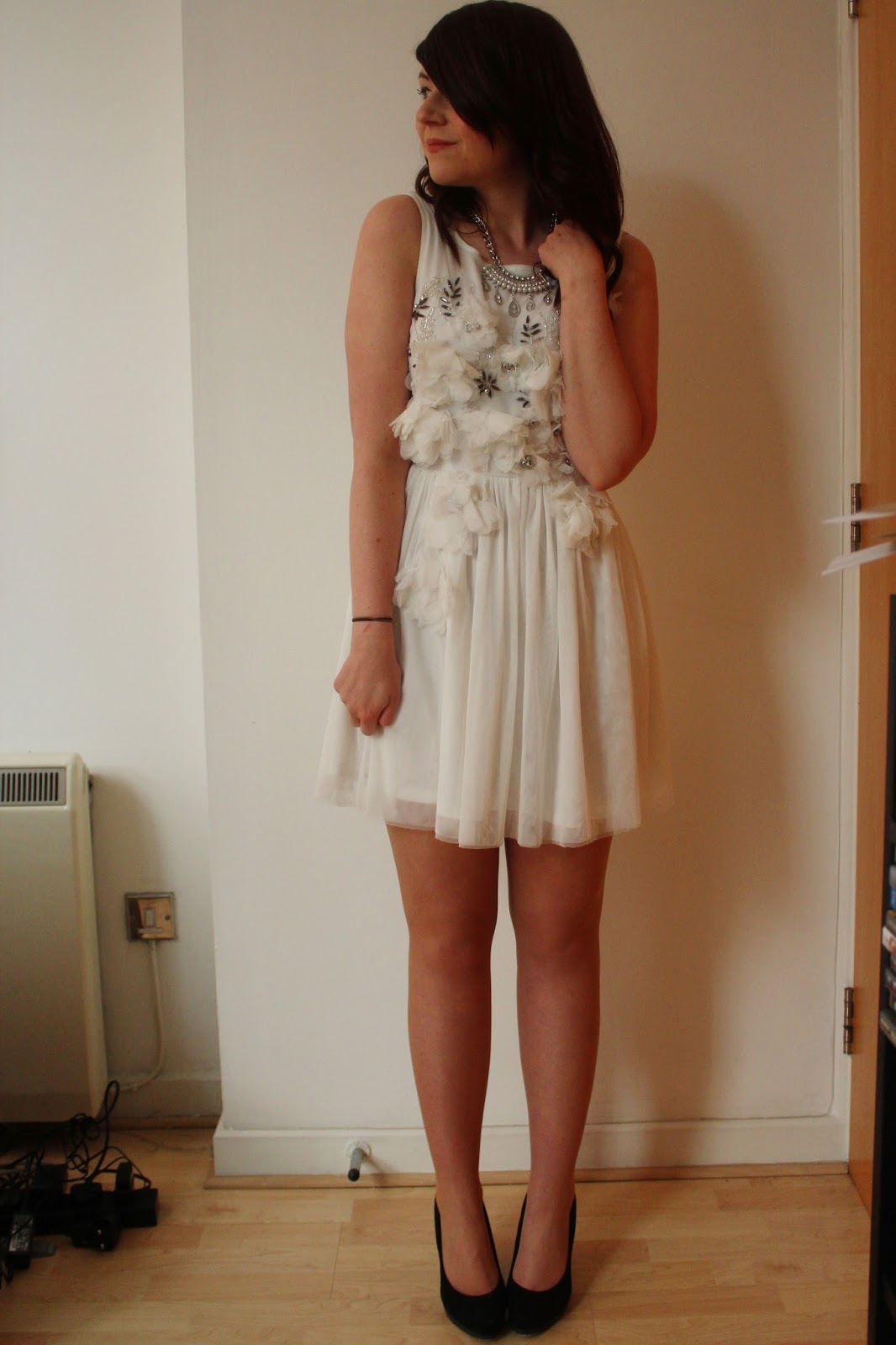 This weekend was a culmination of nearly all of those things. Friday was date night, but when I left work at 5pm the heavens had opened. Now living in Manchester you get used to a bit of rain, but this was torrential. I scuttled back home and hastily texted Phil asking, do we really need to go out tonight? Instead we ordered takeaway from the restaurant we were planning to go to (Deliveroo is amazing!), lit some candles, put on our comfy pants, drank a bottle of wine and watched far too many episodes of The Office.
On Saturday I was up and out to get the train to Liverpool for my cousin's wife's hen do meal. They're already married, but they had a quiet ceremony with just a couple of witnesses so Sarah had her hen party afterwards, and a group of my family and her friends went out for the day for lunch and a drink. At 5pm I rushed back to the train station after the meal to make it back to Manchester for a choir concert I was singing in at 7.30. The concert went well - with a few little mishaps! - and we had a great time. The acoustics in the church were so good I was a little taken aback that my solos sounded pretty alright!
Then it was back home to bed, because on Sunday we had the Great Manchester Run. Now if you've been reading for a while, you might remember that two years ago I watched my friend Eve run the Great Manchester Run and was so inspired that I signed up for the 2014 race the next day. I'd never run in my life! As you know now, running has been the most amazing journey for me over the years. Four 10Ks, one half marathon, countless 5Ks. Early starts and long runs and chewing jelly babies while trying to keep breathing. Running has become one of the biggest parts of my life, and the Great Manchester Run has always had a place in my heart as the place where it all began.

Annoyingly, Phil was two waves ahead of me, so I went down with him at 11.30am even though I wasn't running til 1pm. Living right in the city centre though meant we were literally around the corner from the start. I even went home for a bit while I was waiting for my wave!
Thanks to a little bit of confusion, I almost ended up running in the wave before mine, but right before crossing the line I realised, but it meant I was right right at the front of my wave!
Then, just as I was about to start, I spotted Phil! He'd finished his run and was walking back to our flat! I just got a chance to shout to him and he told me he finished in 56 minutes, which was amazing.
But then we were off! I knew being close to the front I had to be careful I didn't set off too fast, but it was hard to not be carried by the other racers. I was aiming for under 1 hour 5, but really hoping for under 1 hour 2. Under an hour wasn't even crossing my mind. It's one of my big goals for this year, but I just didn't think this would be the day.
As the first kilometre marker approached, I looked at my watch and saw I was under 6 minutes. I knew I was running a bit too fast, especially after a while when my watched flashed up with 9:20 for the first mile. But I also felt good. And I knew if I kept up this pace I could do it in under an hour. The excitement started to bubble up.
Ahead came the 2km marker. I was still under 12 minutes. I knew I knew I knew I was running too fast. But I felt so great. I didn't feel tired, I felt exhilarated.
3km in under 18 minutes, 4km in under 24 minutes. I knew I was setting myself up for disappointment, but I had it in my head now. I could do this. I could do this in under an hour.
For the first time ever, I ran without headphones. I listened to the bands. I listened to the cheering. I listen to the other runners breathing.
5K, 6K, 7K.
8K was when I knew I was going to do it. At 8K (5 miles) in 47:37  I knew I had over 12 minutes to run just over a mile. I could taste it.
By 9K I was exhausted. But I forced myself to keep pushing.
And then I saw the finish.
If you ever ask me, I always sprint finish, but my legs just wouldn't go any faster.
But it didn't matter.
With the end in sight I saw the clock click over to 59 minutes.
I could see the end.
And I started to cry.
I started crying with pride, with exhaustion, with the overwhelming feeling of "I'm about to complete my goal. The goal I've had since I started running two years ago."
I crossed the line.
59:20.
And burst into tears.

I cannot explain the feeling. I can't explain the feeling of hitting a goal you really didn't think you could achieve. The feeling of pushing yourself to your limits. The feeling of, oh my god I did it - what else could I do?
My goal has always been to run a 10K in under an hour. So what next? Could I run one in 55 minutes? What about 50? Suddenly this whole world has opened up to me.
And stupid as it sounds, I feel like I've finally broken the barrier. I'm no longer a "slow" runner. I no longer have to preface every race time with "well I'm slow but...". I no longer have to justify myself. I no longer have to worry that people who have only just started running are going to beat me.
I'm finally... average at running!
I know that sounds terribly defeatist, but that's not what I mean. I've always been slow. Not even not-fast. But slow. And I've always been embarrassed by my times, as awful as that is to say. I've never felt good enough at running, and I've often thought, you know, maybe this isn't my sport. But a love of running prevailed and yesterday I finally proved that I could do it. And now I can do anything. 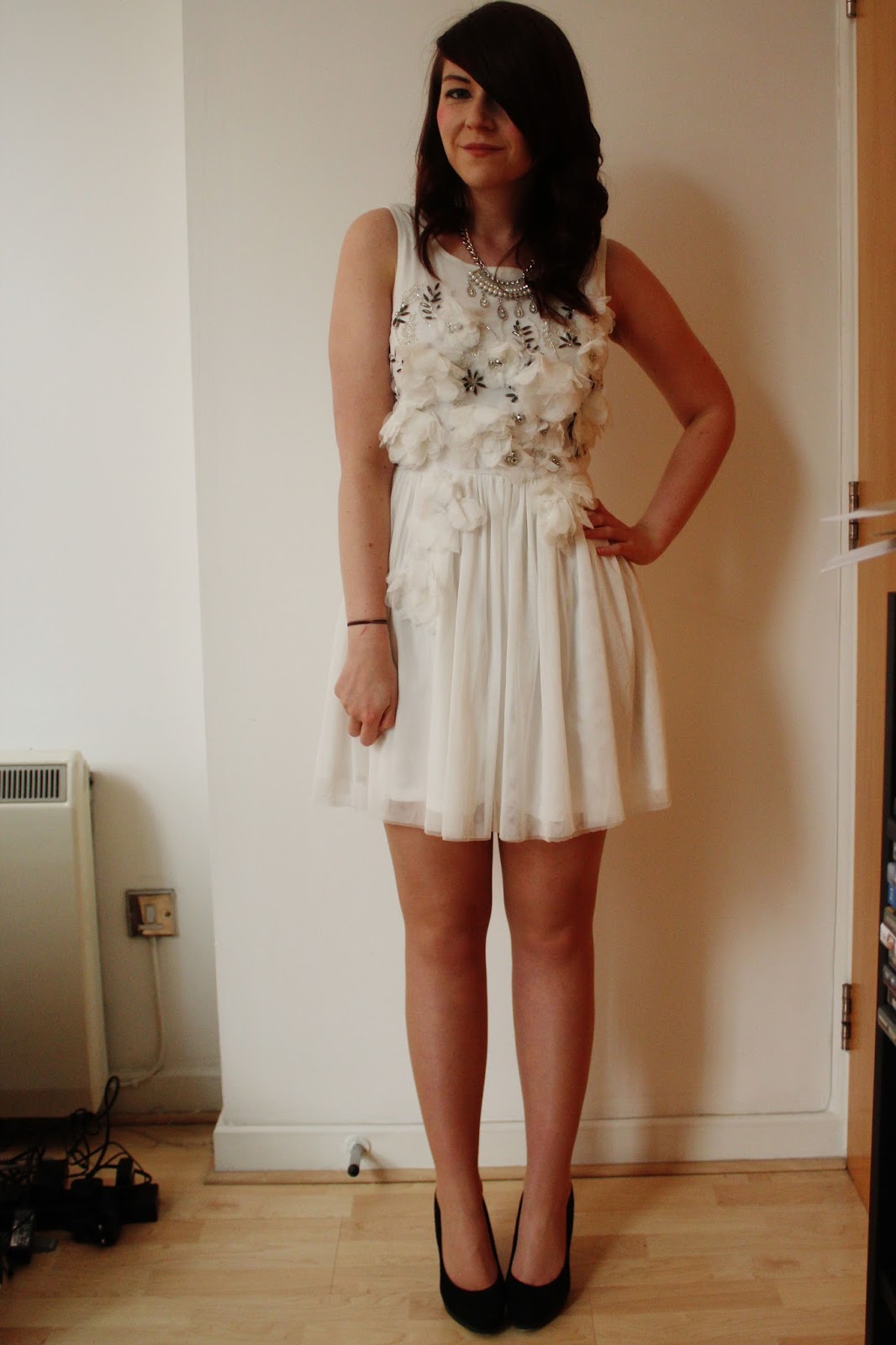 And after all that excitement and exhaustion, I got home, jumped straight in the shower and went to my cousin's christening. Which is where this dress comes in.
H&M contacted me a few weeks ago with some images from their new Divided prom collection (available online and in store now), and I selected this dress as I have a wedding to go to at the end of the month. When it came however, it was a lot more white than I had expected (I thought it would be more pink), and even though we're only going to the reception of this wedding, I decided I probably shouldn't go to the wedding of someone I don't know (it's a colleague of Phil's) in a white dress. But I realised it would be perfect for Leo's christening.
I admit, when I first tried this dress on, I wasn't sure if it was very "me", but once I added some black heels and a leather jacket... poof! It suddenly felt perfect for me! I got absolutely loads of compliments on it at the christening, and I'm thinking of seeing if I can pull it off for the day time with a denim jacket and nude flats. 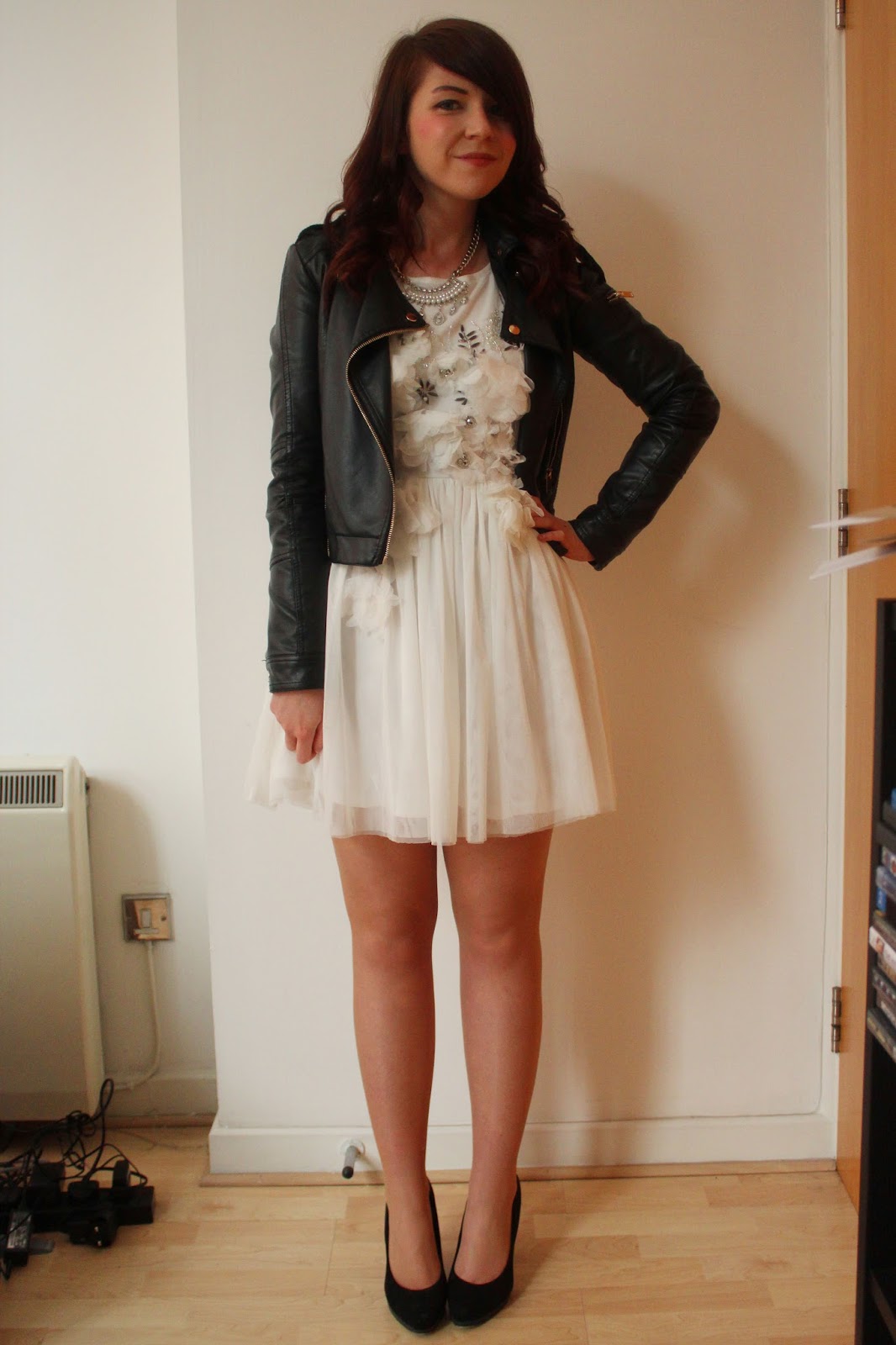 dress- c/o H&M
leather jacket- Boohoo
heels- Marks and Spencers
necklace - Topshop
So after that weekend you can imagine that I'm suitably exhausted, but the fun never stops in my life. I've gotten home from work, thrown some washing in (that I had no time to do over the weekend!) and I'm about to have dinner before choir! Never a dull moment eh?