Half Marathon Training: Intro and Plan 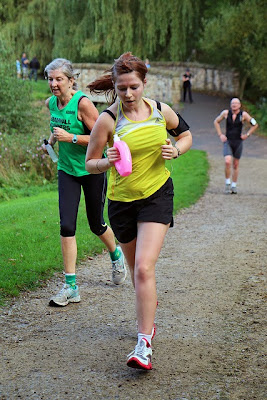 I got snapped at park run! There is no way to look attractive while running...

Before we start, let's back it up.

Remember back in May when I signed up for my first 10K, having never run before?
Remember when I started Couch to 5K and the struggles of runs lasting three, four, five minutes?
Remember seven weeks later when I ran my first 5K?
And 6 weeks after that when I ran my first 10K?
Let's just talk about that for a minute, shall we?
I never, ever in my life thought I'd be training for a half marathon. I never thought I would ever consider running for 13 miles.
But here I am.
And here's how I've gotten here and what I have to come.

Why a half marathon?
My goal was always a 10K. 5K didn't seen far enough (however it did when I first starting running!), but 10K felt like a real challenge. Something that I really wasn't sure if I could do. And that's what a challenge is, isn't it? Not being sure if you can really do this terrifying, amazing, exciting thing you want to do? So before I'd even started running, I signed up for a 10K. That way I knew I had to do it.
But then back in September, a few weeks after my first 5K, I realised I was progressing much more quickly than I expected and was planning a November 10K. Then I found one a few days later in my town and knew I had to try it. I did my first 10K in 1 hour 10 minutes.
So at this point, 8 months before my intended 10K, I'd already hit my goal. What was next?
Well initially, it was just to keep running 10Ks, to keep going faster and leave it at 10K. I genuinely never considered running further.
But then one of my friends asked me if I was going to do the Wilsmlow Half Marathon. At first, I laughed it off. No way was I going to run 13.1 miles. 6.2 miles was more than enough! But then I felt the pressure of the limited places (the Wilmslow half only has 4000 places and it's encouraged to apply as soon as possible), and the safety blanket of the fact that it was 6 months away. So I signed up.

The Plan
There are thousands of half marathon training plans out there, but I had a couple of criteria I needed mine to fit:
1) Week day runs short enough to fit in before work (eg. 5 miles or below)
2) Park Run must count as one of my runs each week
3) Little focus on speedwork and main focus on distance, at least to begin with.
The Half Marathon plan I chose is based on Hal Higdon's Novice 2 training plan. The only changes I made were the days of the runs- 3 mile runs for Tuesdays and Park run, long runs on a Sunday and 3-5 mile runs on a Thursday morning, with Wednesday for strength. My rest days are Monday (after my long run) and Friday (before my fast 5K Park run and Sunday long run). 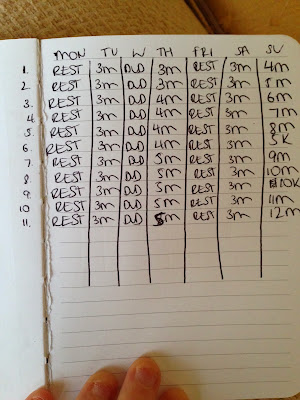 I did initially have only one rest day and two DVD days but I realised how important rest days are and I love my rest days! I don't stick to  my schedule religiously, mainly because I have 6 months to train and also because running isn't my life, but I always try to do my long run on a Sunday (more on long runs in my next post!), and if I can't, I repeat that week.
Because this is a 11 week programme and I have until March, I'm in no rush to complete it. My aim is to try to have this programme done to 12 miles (I don't want to run 13.1 til the race) by Christmas, and then start Insanity interspersed with long runs and park runs for a few weeks before getting back fully into my training before the race.

I'm hoping to keep this as a little mini-series as I experience the trials and tribulations of training for a half marathon. Next time I'm going to talk about the dreaded long run!