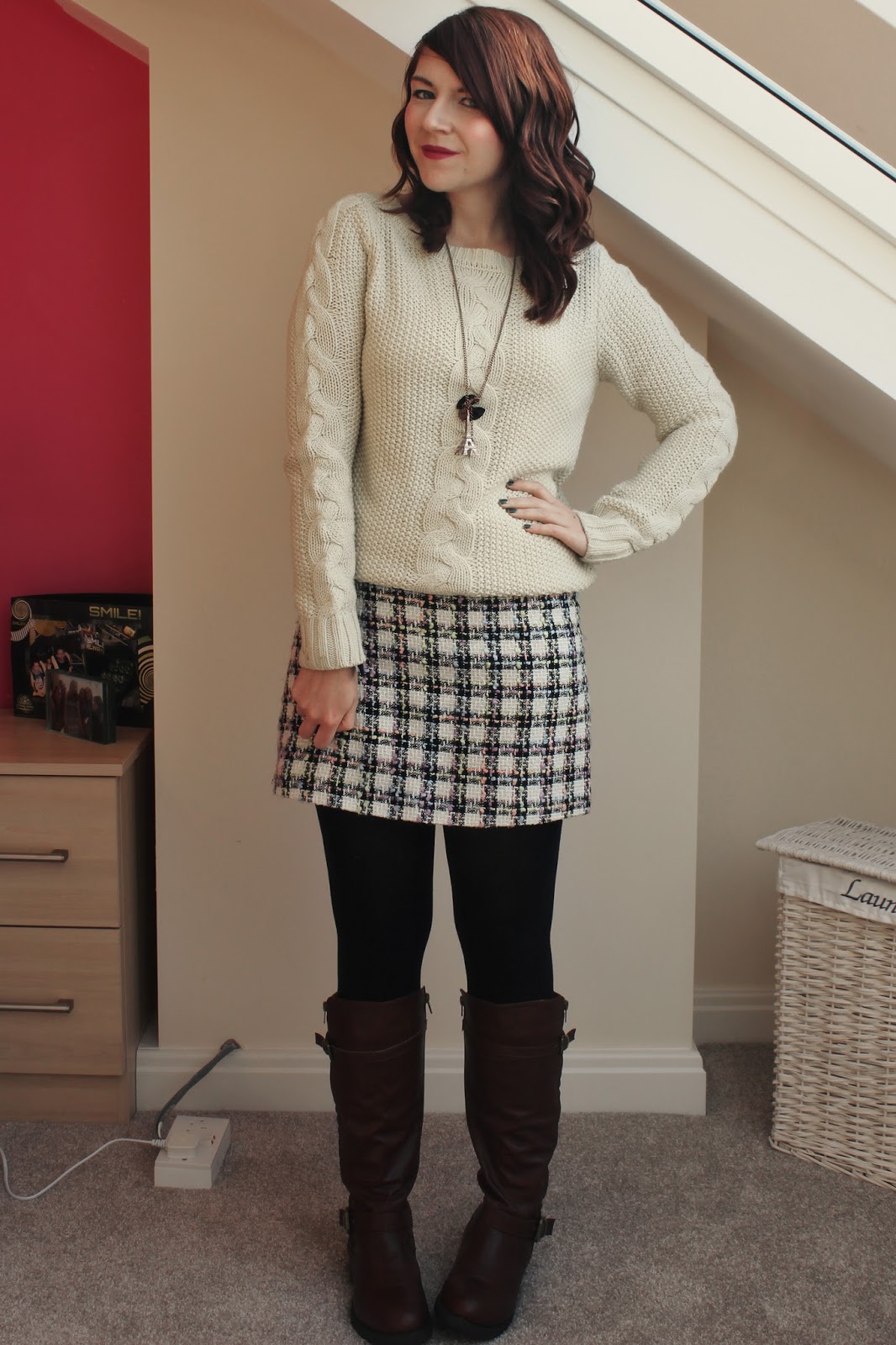 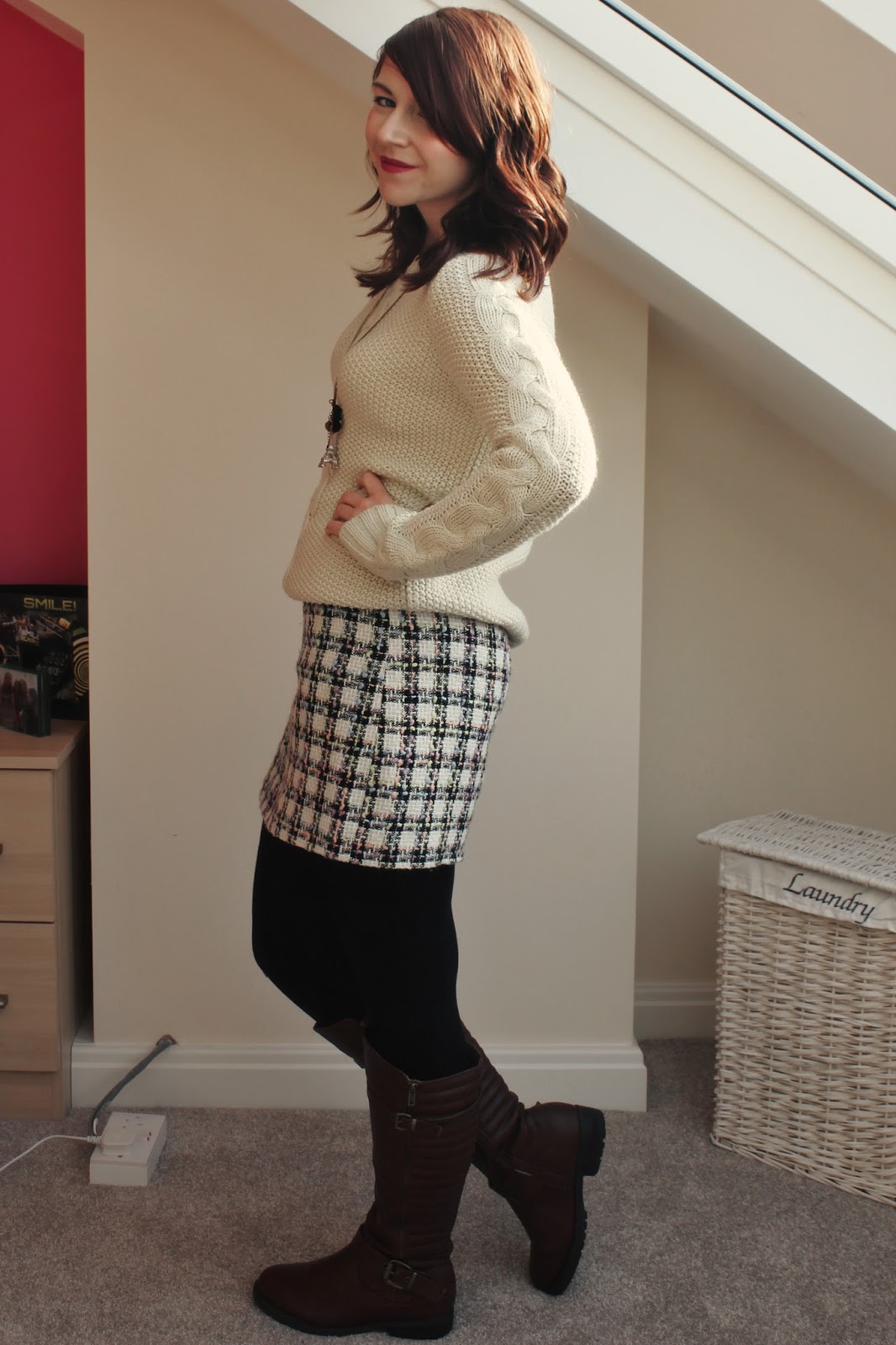 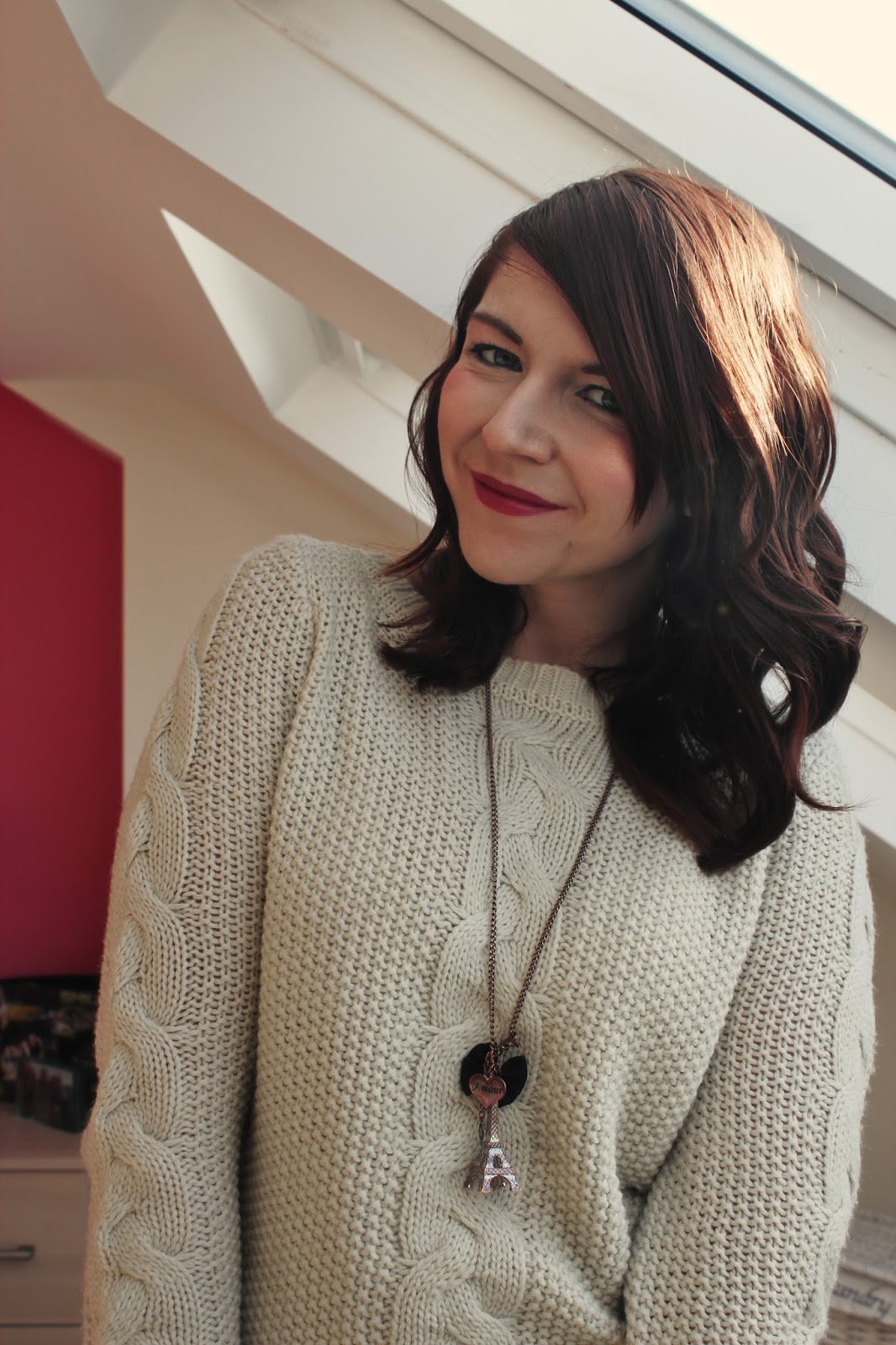 One of the only good things about getting back from holiday is that I can now wear this skirt. I impulsively bought it before I went away on the premise that it would go with everything. It has been worn three times this week, as I wore it on Wednesday with a maroon jumper and Thursday exactly as you can see here. It's just way too dark to photograph outfits before or after work now so I waited until today to rewear this and photograph it. I was going to take photos outside for the first time in ages, but my neighbour was outside doing his garden so I chickened out. I love this outfit. I don't even know how it came together but I just had the image of this skirt with brown boots and a chunky jumper. You'll definitely be seeing this skirt a lot over the next few months! I'm trying not to buy more clothes at the moment with Phil and I getting our own place after Christmas. One to save money, but two because I don't think all my clothes will fit in our flat! 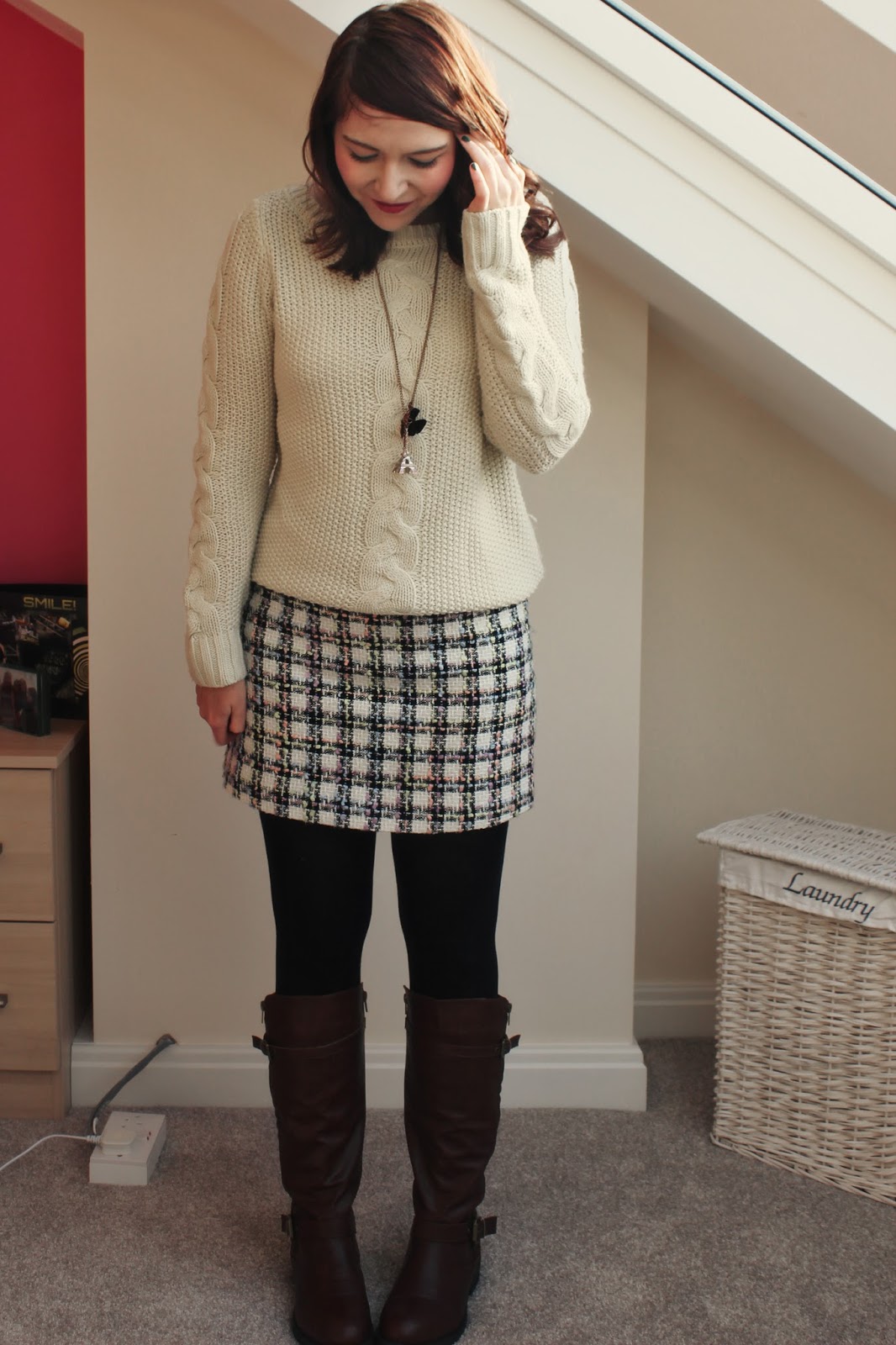 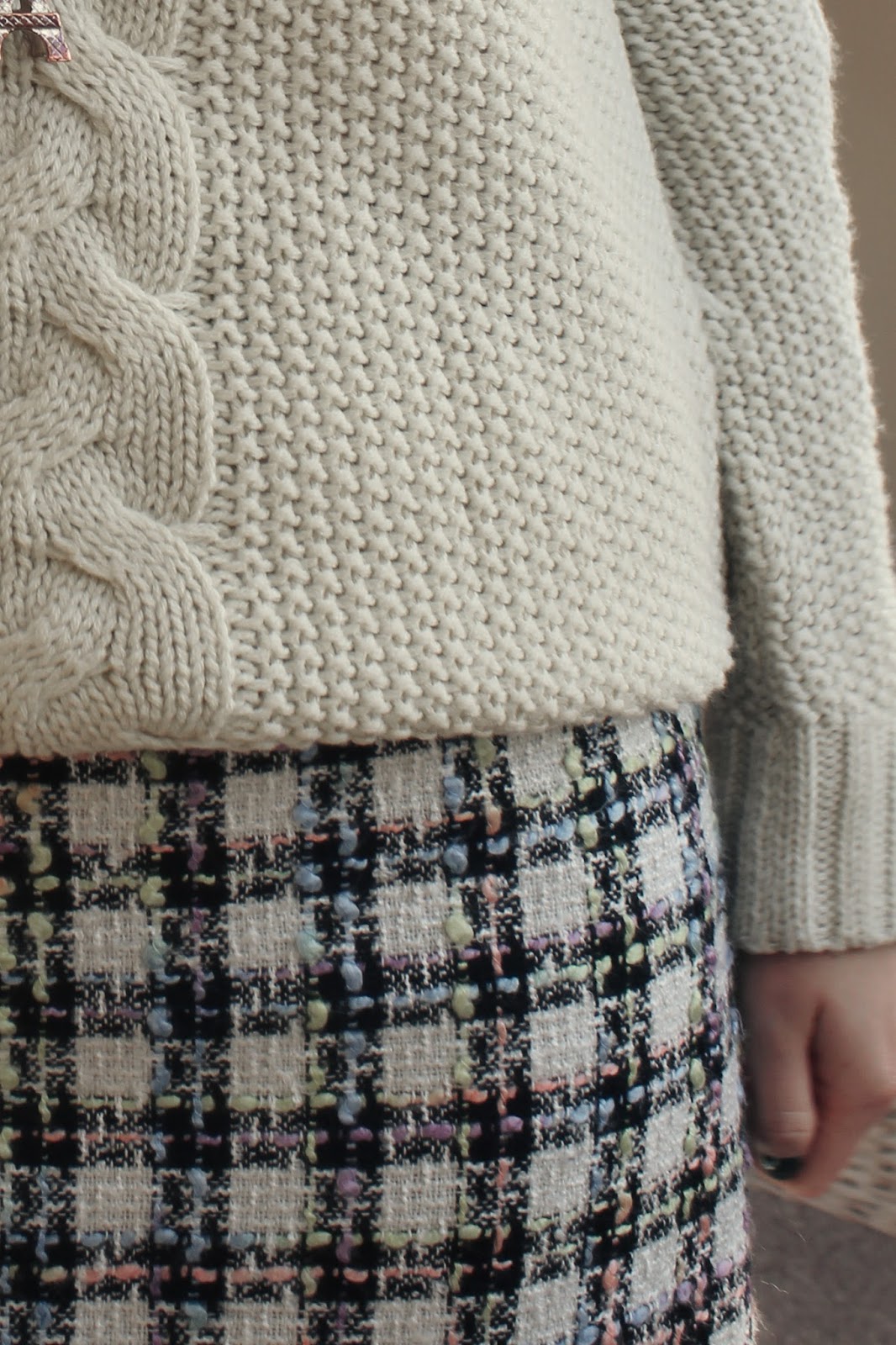 This weekend has been lovely, but it's gone way too fast and I'm very tired. Yesterday I was up at 6am for Phil to come get me at half 7. A few weeks ago he signed up to do Hellrunner Up North for Christie's hospital who have been doing some great work for his best friend, and yesterday was the big day. Phil was super nervous because he's had problems with his knee for almost a year now and it was especially bad when we ran the half marathon earlier in the year and as a result he hadn't really trained. If you don't know much about it, it's basically a horrible run through bogs and up hills and through mud for 10 to 12 miles of pure hell. I went down with his parents and sister to support him and his friend Mike who was doing it with him. It was actually a really nice day but the race just sounded horrible. The bogs were neck-high in some places and the hills were apparently just awful. Phil's sister Suzie and I were stood right by the "bog of doom" and one guy got up to it (bearing in mind it was about half a mile from the end), looked at it and went "nope not doing it" and climbed under the rope and out of the race! Phil did incredibly well and was absolutely covered in mud by the end. I'm so proud of him but he has told me that I had to promise to never let him do it again! He had done another Hellrunner before in the midlands but said this was way worse! After he was all cleaned up we headed back and had a curry with his family which was lovely. 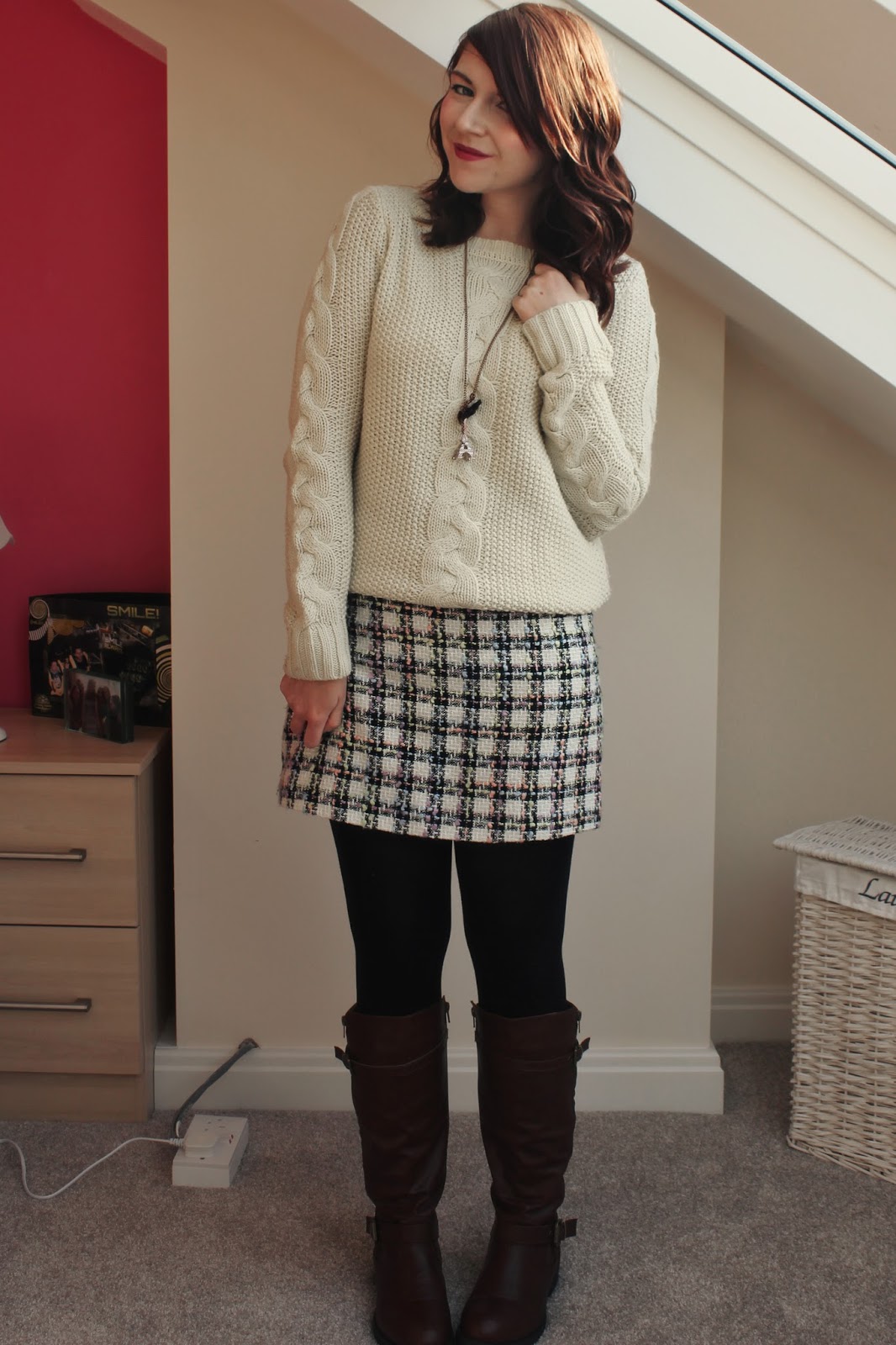 And today I went on my first run since June! If you remember I had a break for 2 months to do Insanity but then got injured and was out for a few weeks, so I've just been doing T25 and Chalean Extreme for the last few weeks, but now I'm back from holiday I'm going back to running at the weekends (I've decided it's too dark to be going out running at 5am). I was worried that getting back into running was going to be a long slog of run/walking, stopping and generally rubbish fitness, but today I went out and nailed 2 miles. No stops, no walks and I did it about 20 seconds a mile faster than my usual pace. I was absolutely over the moon! So hopefully in a couple of weeks I'll be back doing Park Run on a Saturday and doing my long runs on a Sunday. I'm going to write a post soon on my winter running plan, but I'm basically going to be doing workout dvds 3 or 4 days a week (T25 and Chalean Extreme) in the morning at 5am before work, and then doing two runs at the weekend and focusing on my speed. I am ready to nail that 30 minute 5K then hopefully a 60 minute 10K. I have no races signed up for at the moment but I want to stick to 10Ks for a while and maybe leave it a year before I do another half. I need some time to get back into enjoying running again and not just running because I have to.
The rest of today has been spent food shopping, cooking and visiting family as usual! My cousin Laura has just bought a house, and her sister in law (my cousin's wife), Sarah, is due to have a baby boy any day now so it's really exciting times in the Crowley family!

Well it's Sunday night so it's time to paint my nails and watch Parks and Rec!