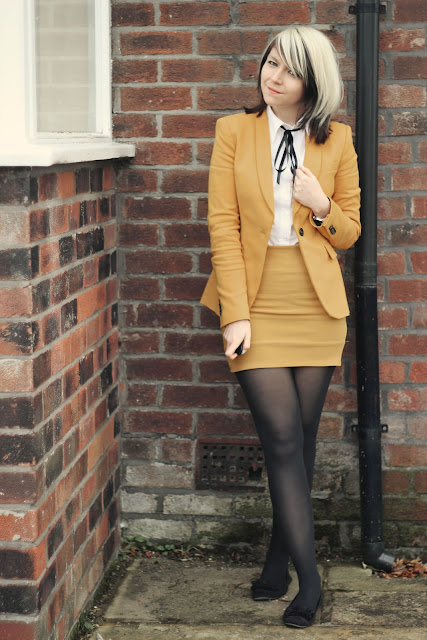 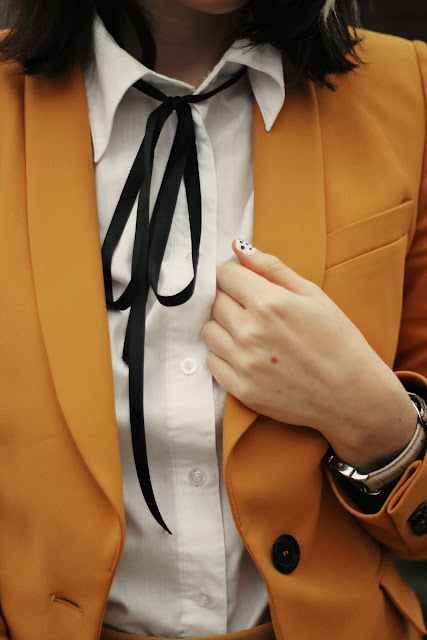 When the lovely folks at Boohoo asked me to chose something from their website I was excited, but also hugely overwhelmed. I absolutely love boohoo and knew I had to look through everything before committing. Eventually, I decided to dive right in and I chose this mustard skirt. I am crazy about mustard for the cooler months and had been looking for a mustard skirt for a while. However, when it arrived, I was stumped. It was a much richer, more gorgeous shade of mustard than I expected (much less yellow than I had thought, which I prefer) and I wanted to do it justice. This was my second outfit this morning. I worried that mustard-on-mustard might be a little much, but I actually love it. I've been working on the cost-per-wear of this mustard blazer, seeing as I know I shouldn't have splashed out £70 on it, so I've been trying to work it into my wardrobe more. They're a slightly different colour, but I don't think you can tell too much. Someone actually complimented me on my suit today which made me think they must look good together!! It's like when someone says they like my dress and it's a top and skirt- it makes you feel well put-together. 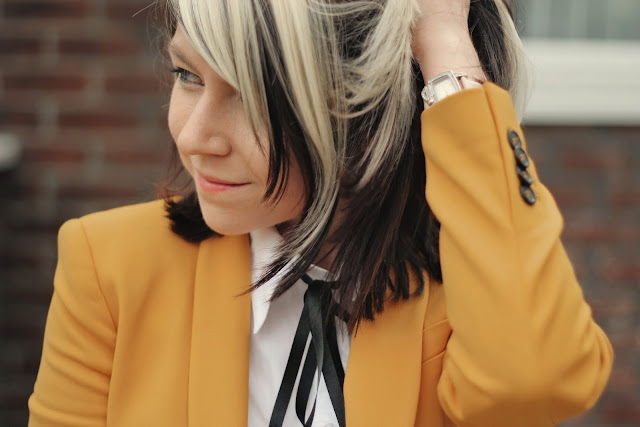 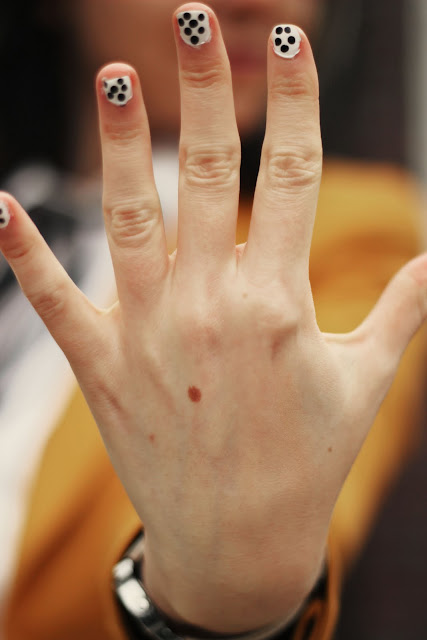 Black and white nails today! I was bored of my navy and white ones and they were starting to chip, but I wanted neutral nails because I'm considering wearing black to the IFB Crystals and Crumpets event on Friday, but thought black and white was too similar to navy and white. So I did white with black spots instead. They're kinda like dalmatians. 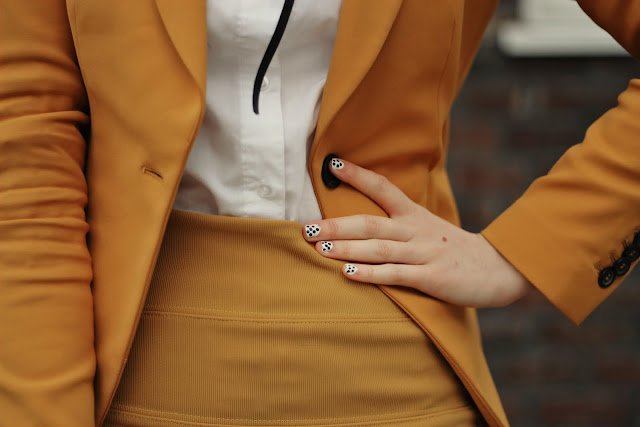 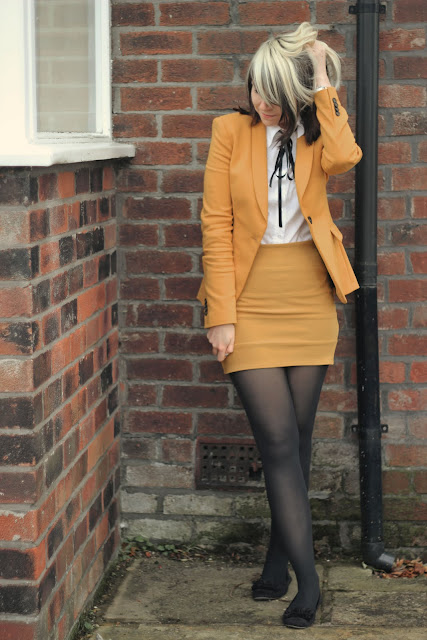 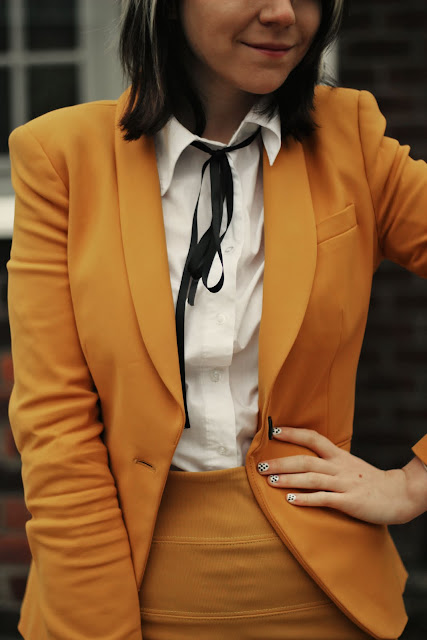 This shirt was a revelation. I'd seen loads of pretty blouses with black bows but didn't want to splash out on something so simple, so I just bought some ribbon for 50p and tied it around the neck of a white shirt. Voila!  Instant ribbon shirt. I think it ties in the mustard so well. There's something I love about black, white and mustard. It's like black, white and red. It's just timeless and really works. I'm really glad I chose this skirt! I'm wearing it a little lower than the waist on these pictures though because it's a bit too big. I always have this problem with skirts- I don't want to get one too small because it won't fit over my hips but it's always too big on my waist!! 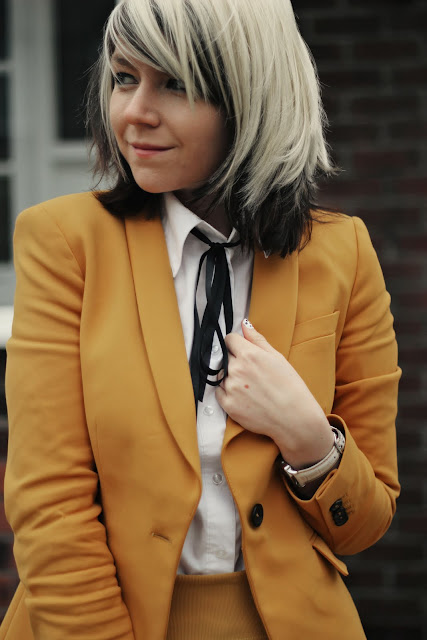 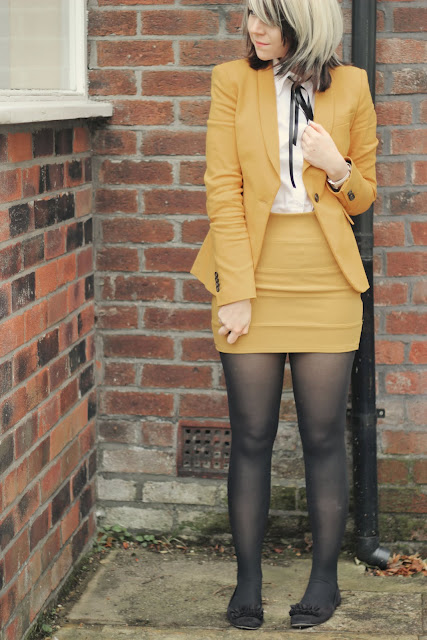 Oh and before I go, I have some news. I'm taking part in the Matalan Style Project this month and you can now vote for my look!! I'll be writing more about it tomorrow- I'd already taken today's pictures when I found out I could announce it today but you can vote for me now!! All you need to do is comment with Girl Next Door Fashion. It would be wonderful if you could all vote for me!! I'm gonna get my Matalan post up tomorrow and taken extra photos to post up for Friday because I'll be at the IFB event in London, and finally meeting my blogging BFF Sian!! I can't wait!! 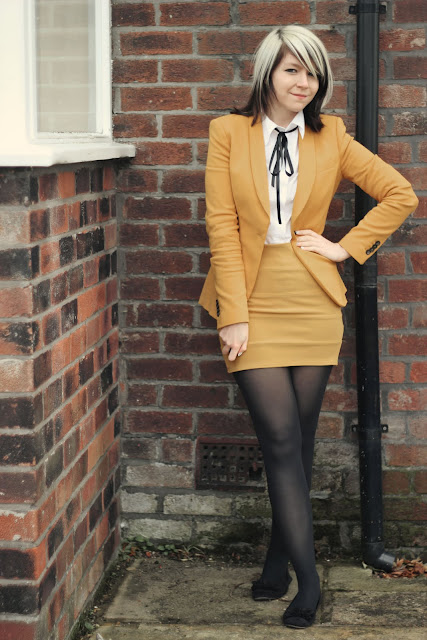 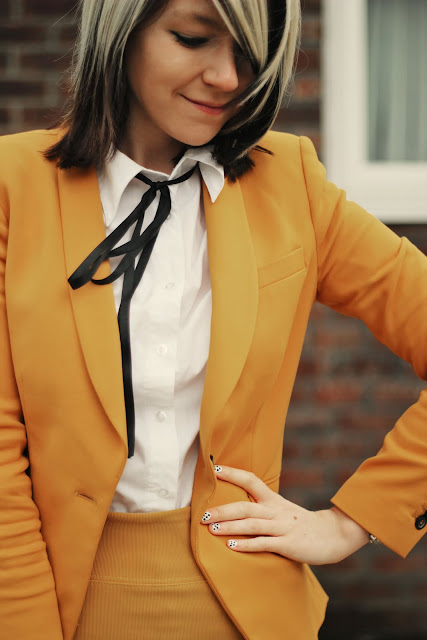 Have a wonderful evening!!